Were the Heroic Spirits that powerful in their lives? Consider:

Some heroes had "reasonable" powers:

But other heroes had ridiculous powers:

Was King Arthur's Excalibur really capable of such beam? Was Lancer's Gae Bolg really that destructive? Or were such attributes given when they were summoned by the Grail, based on their legends?

And also, there is the physical strength factor. Most heroes make holes in the walls and ground while fighting, and can jump great heights (in UBW, episode 1, I remember Saber jumped to the roof of Shirou's house, looking for nearby enemies).

When a Hero dies and ascends to the Throne of Heroes to become a Heroic Spirit they will gain strength based off the worship of their legend as such the more fame and renown one gets the stronger they become. when they are summoned, there are factors which determine how much strength they have in relation to what they have from the Throne of Heroes

For instance with those, Cú Chulainn, Heracles and Arturia would be stronger in Europe. Arturia's Strength fluctuates from her different Masters with Rin being the strongest because of Rin being an excelent Magus in comparison to Shirou or Kiritsugu.

Cú Chulainn, being an excellent fighter, would be lesser so when Summoned as a Caster which as seen in Fate/Grand Order when he is summoned as a Lancer and a Caster by The Protagonist

As you can see when Summoned as a Caster Cú Chulainn looses Strength, Endurance and Agility but gains Mana and Luck which then makes him much like most Casters and not suited for a head on battle

As the above Quote uses the word "Legend" which is

a traditional story sometimes popularly regarded as historical but not authenticated.

Another instance of a Servant being stronger that they actually were in real life because of their "legend" is with Angra Mainyu who was an ordinary villager and was randomly chosen as the "source of all evil in the world" by his village and was tortured and sacrificed in the following rituals, so while his legends states that he is the evil god of Zoroastrianism he actually isn't

The things you have identified are all Noble Phantasms

"crystallized mysteries", powerful armaments made using the imagination of humans as their core, and weapons or abilities owned by Heroic Spirits.

so these would be under the most influence from one's legends with their original weapon being the basis and arguments/altered by their legends, for instance with Ea it's actual strength is around the level of Excalibur, its effect is unquestionably that of the legend of "ripping the world"

with Cú Chulainn's Gae Bolg it is in fact 2 Noble Phantasm, the first (Barbed Spear that Pierces with Death) being a single Anti-Unit of the legend of a cursed spear but the second (Soaring Spear that Strikes with Death) is Anti-Army without it's curse to reverse cause and effect which in his Legend

It distorts space to create a "tapestry of action" that splits into numerous spearheads that pour down over the enemy. It is said that it split into thirty in his legend, but it seems that the number has increased after Cú Chulainn became a Heroic Spirit.

so Soaring Spear that Strikes with Death is in fact more powerful than the original legend, possibly because of his legend being embellished over the years

Was King Arthur's Excalibur really capable of such beam?

it actually isn't a beam, on the Wikia Page it says

While the result is what looks like a large beam of light, only the tip of the attack, which is a wave of light that can mow through the surface of the Earth, is capable of doing damage, as the beam is the result of the "dislocation" of everything the attack destroys in its path. Even if it is dodged, those in close proximity can still be temporarily distracted by its intensity. 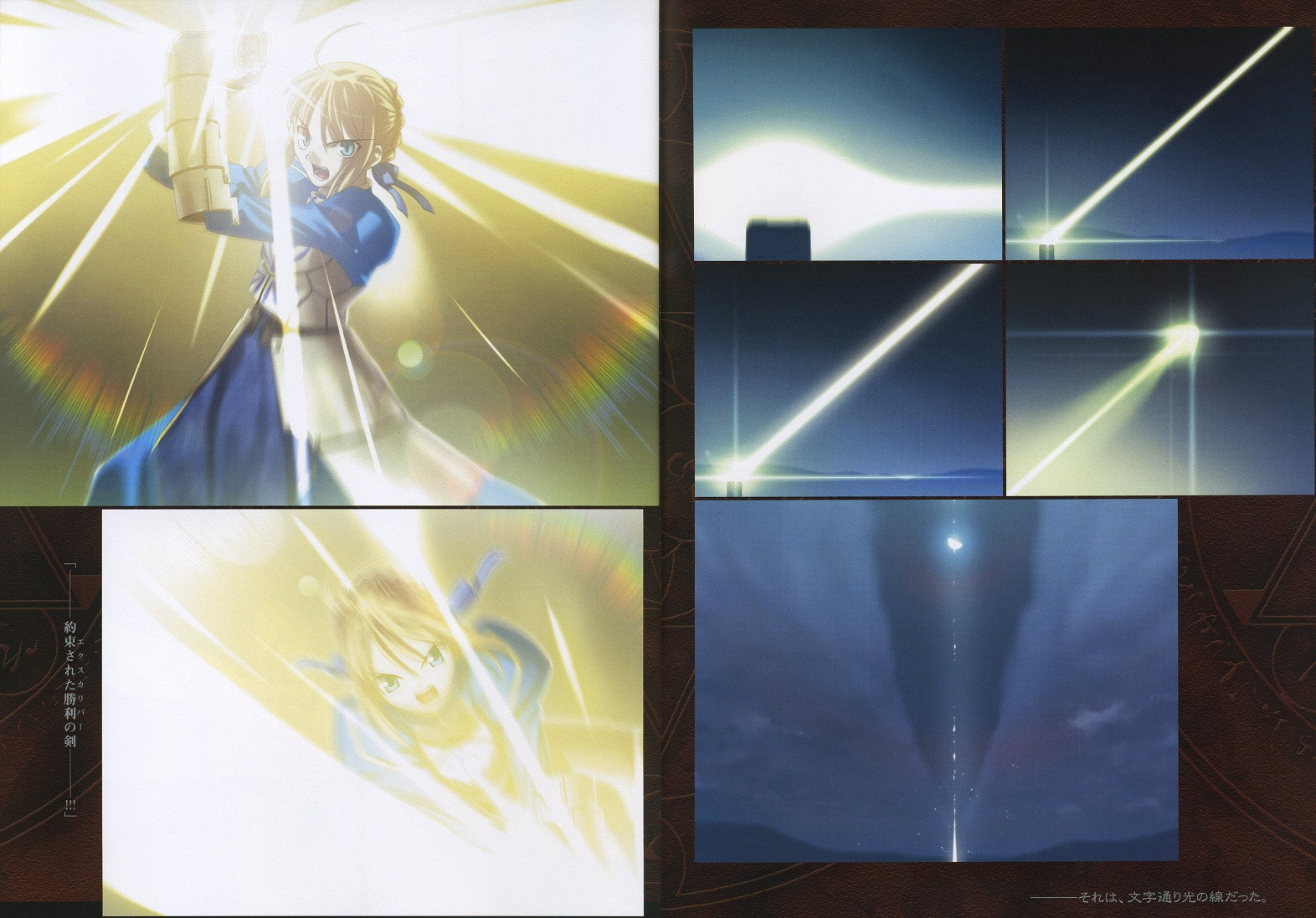 but as already mentioned since a Nobel Phantasm is influenced by the imagination of humans more than likely it is King Arthur's Legend of being a king who was the only one to wield a sword forged by gods and when people think of weapons forged by gods they think very, very destructive (ie Thor's Hammer, Odin's Spear)

1: In the Fate/Zero material - Servant Status: Saber, p.012-013 (Citation) states that Excalibur: Sword of Promised Victory is Anti-Unit while all other places state it is Anti-Fortress, am unsure if this is a translation error or not

Actually it's depends on the individual. As Garden of Avalon, supplementary materials reveal that Excalibur DID had the power to generate a Sword Beam. I guess it depends on whether they come from a mythical or historical background. Those such as Heracles who had the power to lift the sky and according to some myths create the Strait of Gibraltar which separates Spain and Africa is obviously weaker as Servant. While heroes closer to the modern era are explicitly stronger as Servants than real life. Shakespeare would be a good example, as he had zero magical ability in real life and relies on his noble phantasm.