How was The Dwarf in the Flask created?

In the Fullmetal Alchemist Brotherhood, it was revealed that

The Dwarf in the Flask was an experiment of the King of Xerxes and that it has Van Hohenheim's blood.

But it wasn't explained what method was used to create him. So, how was The Dwarf in the Flask created? Was it ever explained in the manga?

The backstory of van Hohenheim and Father is discussed in chapter 74 and 75. All we see is this:

The only thing relevant in these chapters to how the homunculus was created is this: it notes that blood was taken from Hohenheim to create the homunculus. 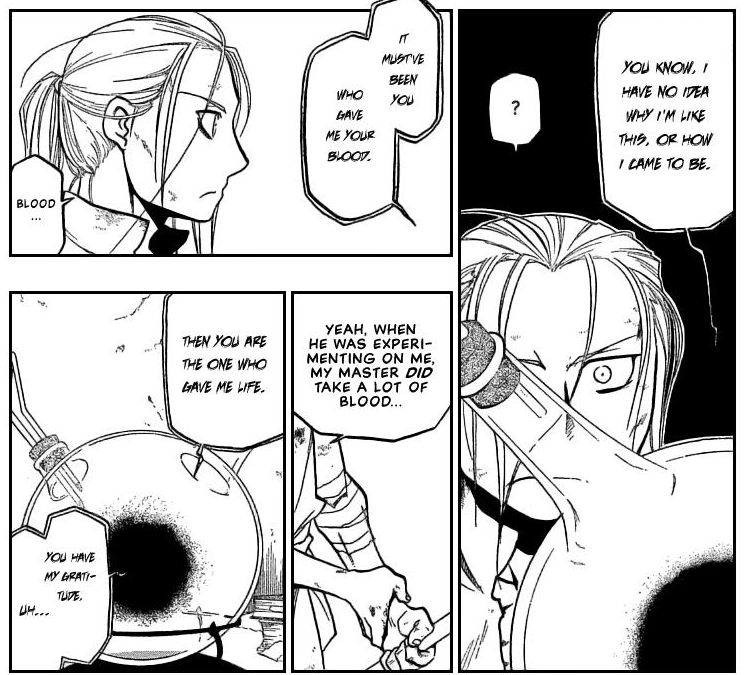 The notion that they have blood relation is repeated later in chapter 75, but this is the main thing we ever get as to the origin of the Dwarf in the Flask.

It's possible of course that there might have been more information in bonus material to the series, but the fact that the Wikia lacks anything beyond this and that I've never seen any serious commentary on this among fans of FMA suggest that this probably isn't the case.

Fullmetal Alchemist is an Anime that IS somewhat based on real alchemy, so you can ask this question by thinking about Real Alchemy in this very own world we live in.
In the past, many alchemists tried to create artificial life-forms called homunculus, which was used in this anime as a base for the homunculus in the anime.
The Dwarf in the Flask looks very similar to what alchemists at that time were trying to do, like trying to fertilize a chicken egg with their own semen and blood, seal it inside a flask and hope that a small human would be born from that interaction. 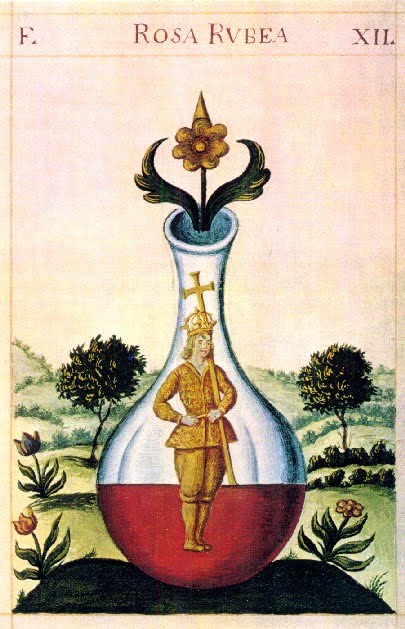 So, as he was made inside a flask, he probably was made in a similar manner, we just don't have the exact "recipe"

Here are some references and interesting facts: https://en.wikipedia.org/wiki/Homunculus
By the way, I didn't know, but Paracelsus was credited for the first mention on Homunculus.

Paracelsus was the inspiration behind Hohenheim, which is where his name came from:

Considering the Dwarf in the Flask knew a vastly complicated array like the Xerxes Array, it's probably a piece of Gate Knowledge put into a body by an alchemist using Slave 23's blood. This is corroborated by those little black hands that grab anyone entering the Gate, which look remarkably like the Dwarf's hands.

Dwarf in the flask is in my opinion a depiction of the emerald tablet. The father or creator of alchemy and all alchemical nature's. It is also the thing the philosopher stone was created from.

Like Mihreia said above, I also believe the little Dwarf in the flask to be a piece of the gate. Partly because of it's vast knowledge and the very easily recognizable little black hands that strech out to grab things. Though I want to add that the people of Xerxes may have had alchemy skills and methods that the modern people of Amestris are unable to grasp hold of. Maybe it was a lost skill. It's like how we still have mysteries of people and events of the past. Till now, we dont know how the pyramids were built. Maybe it's something of that sort.

Other than that, all the other sources I've read do not give much information as to who,where or how the first homunculous came to be.

15
Why can't The Dwarf leave the flask?
8
How come Alphonse can do alchemy in Fullmetal Alchemist: Brotherhood?
7
Where did Scar's other tattoo come from?
11
What are the origins of alchemy in Fullmetal Alchemist?
18
How did Homunculus come into being?
5
How Edward managed to escape from Gluttony?
7
How did Edward manage to defeat Father?
13
How is King Bradley's sword so sharp?
8
Who exactly is Selim Bradley?