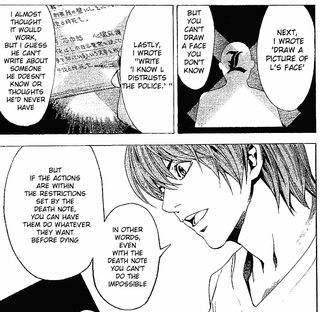 12
Will a person die when their name is written in the situation of death?
2
Could one make a specific person shoot someone dead using the deathnote?
-1
Can you manipulate a person using an alias with the death note?

4
Can the scenario for someone's death be written so that there is a possibility of other people dying?
3
Death Note 23 Day rule?
8
How long can you manipulate a person with a Death Note?
12
Will a person die when their name is written in the situation of death?
4
Can you manipulate someone's memories?
0
Can you prolong someone's life using the Death Note?