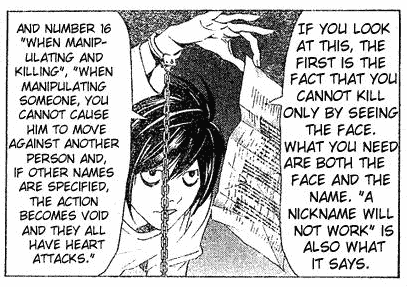 12
Is it possible to kill people indirectly with the Death Note?
4
Can the scenario for someone's death be written so that there is a possibility of other people dying?
4
Why did Rem die in The Last Name?
11
How far can you manipulate someone with a Death Note?
2
If a Death Note user specifies, along with the actual target, the name of a person whose face the user doesn't know, will that person live?
5
Does writing an alias in the Death Note count as misspelling the name?
8
Can the Death Note manipulate people whose names aren't written in it?
5
Did Minoru die because of the Death Notes' new rule or because Ryuk wrote his name in a Death Note?