Why can't the birdcage be cut?

Why does it appear that Doflamingo's Bird Cage is indestructible? What is the different between the strings used in DD's attacks and the birdcage? Why can't Zoro cut the birdcage? 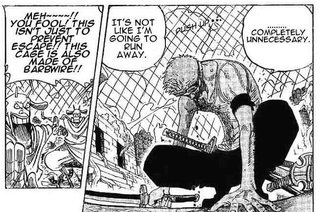 I don't think it is because Zoro cannot cut the cage that he is trying to push it back. In chapter 270 he was in a similar situation, where he was trapped by the White Cage during the Ordeal of Iron. At that time he says it is completely unnecessary to trap him, because he is not going to run away. Now, with the birdcage, the situation is similar in the sense that he has no intention of running away. Cutting the birdcage or running away, will not benefit anyone with Doflamingo still around. He will try to kill anyone present at the island, with or without the birdcage.

Zoro knows this and knows that the person that will defeat Doflamingo is Luffy, but he does not know how much more time Luffy will need. Therefore to buy Luffy as much time as he can and to prevent as much casualties as he can, he tries to block the cage, instead of cutting it. We have no clue what would happen if he cuts the cage and it will probably require much needed energy, which will probably just go to waste by cutting the cage over and over again, because we all know Doflamingo will keep putting it up again and again.

Now as to your question whether the birdcage is indestructible, that has not yet been revealed up until the latest chapter 787. Other than a few unknown pirates and the meteor from Fujitora, there has not been a single person that has actually tried to attack the cage, not now, nor in the flash-back. Therefore it is hard to say how strong the strings actually are.

First of all, the birdcage itself cuts. A person not possessing Haki can't even touch the cage. If they try to touch they might get injured.

Here is a proof: 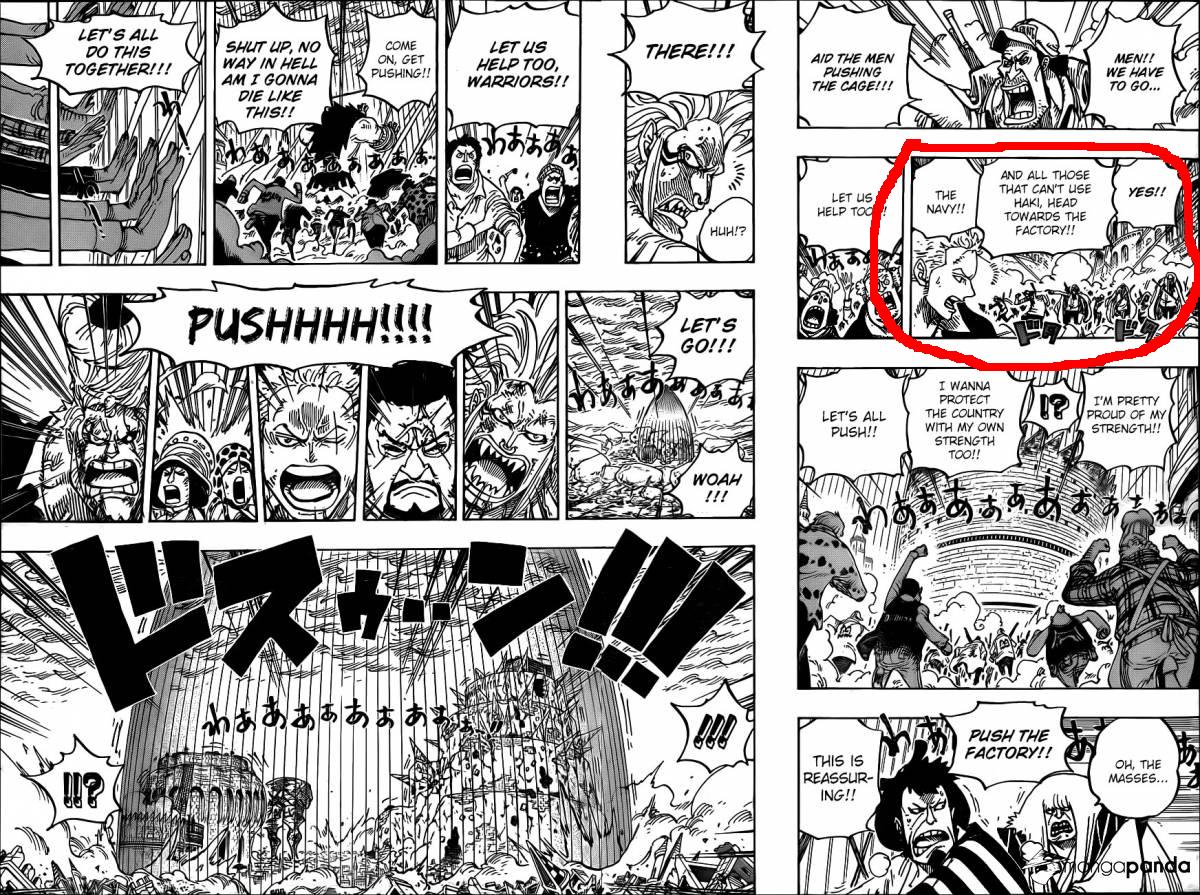 Zoro told them to move towards the factory because the factory is made of sea-stone (Kairoseki) as mentioned in the wikia and is immune to getting cut by the threads, but is getting dragged instead. So the question of normal people cutting it is solved. But what about the people who possess Haki?

The threads created by Doflamingo are thin enough to be almost invisible but strong enough to slice rocks, trees and even meteors as per wikia.

There's no person who has attempted to cut down the Birdcage. Since no one has tried, it's probably presumed by the swordsmen like Fujitora, Zoro, Trafalgar and Bastille that it can't be cut.

It's similar to the barriers of Bartolomeo that are indestructible.

I have 2 theories on why Zoro did'nt try to cut the birdcage.

Personally I prefers the first theory cause it's way cooler and there is the speculation that Zoro possess COC ever since his fight with Monet.

As for Fujitora I believe he could not openly oppose Doffy due to their respective status.

I believe that his awakening or conquerors Haki may be directly associated to the birdcages invulnerability, even Fujitora and Zoro cannot cut it. It also may be because doffy's clone, whom he doesn't need to directly control will just continuously set up the cage. My final speculation is that the birdcages center might contract upon cutting a section out of it, making cutting it a bad option.

Well I believe that zoro still not strong enough to cut the tread, as he said he cant hold much longer againts the thread, and I believe fujitora able to cut the thread but he choose not to. straw hat teams still need training and it will be time skip 2

Definitely can't be cut. If it could have been it would have been, it was close to destroying the country n killing a lot of people Fujitora would have cut it or attempted it with all the civilians at risk. Imo it's the ultimate death trap. Uncutable razor sharp completely rigid string with titanium like tensile nobodys cutting it or bashing a konobo through it. Mihawk is the only wild card an white beard if he were alive.

(This is my summary from the evidence and speculation from the rest of this thread)The birdcage was never really a threat to the straw hat crew cause there were people in Dressrosa strong enough to deal with the situation. I think Zoro and Fujitora could cut it but there may be no point as no one knows what will happen if the cage is cut. Sabo, Fujitora and Zoro are all strong enough to not only fight Doflamingo from scratch but at least finish him off after the extensive damage he's taken. The main thing was that neither of them wanted to interfere with the fight. They all knew Luffy would beat him and it was Luffy's fight, they just had to give him the time so to minimize casualties they tried to hold the cage back. The evidence that Zoro wouldn't run from the situation anyway, that he won't interfere with the fight which also goes for Sabo and Fujitora who actually said that they wouldn't interfere at seperate times. The whole situation was shown to be quite a lot more difficult than it actually was. Physically there were a lot of solutions for the birdcage. Either 3 of them could break the cage or just kill Doflamingo.

11
Why can't Devil Fruit users swim?
14
Why can't Zoro cut Seastone?
5
Why don't the citizens use the underground port and factory to escape the Birdcage?
3
Why is All Blue not part of the 8 Seas?
1
Why does Zoro's “1080 Pound Phoenix” use the term “pound” instead of “kilogram”?
5
What is the other goal Zoro mentions in the Alabasta arc?
4
What exactly is the deal with Black Blades?
1
Why is it when a character nimbly dodges attacks the aggressor will call it “running away”?
2
Is Law stronger than Zoro in sword technique?
6
Why can't Haki be used with seastone cuffs?