Why are some of the names written in the Latin alphabet in Hunter x Hunter?

In chapter 199, Gon and Killua's names are written the Latin alphabet on the blackboard. 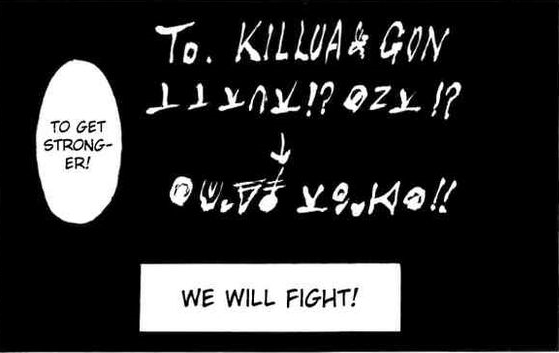 In chapter 45, Killua and Zushi's names are also in the Latin alphabet. 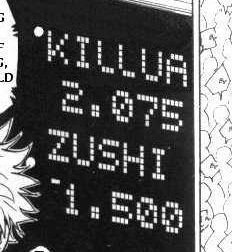 There's more than only Hunter language in the world, and romaji (or directly English) is one of them.

Do you remember Leorio mentioning that the phone Beetle can translate over 100 different languages? Hunter world most likely has the same languages of the real world, and many more are not shown yet, so far the Hunter language is the only invented one that we could see in both anime and manga, that's the reason of why in the manga we could see Togashi using the romaji/English writing.

However, I guess that the image you provided was edited by a fansub, as the original name of Zushi as for Official Hunter Databook (done by Yoshihiro Togashi) is written as Zooci (in Japanese ズシ, romaji "Zu-shi") and not Zushi. In the 1999 version, you see how the name Zushi is written in the score screen as Zooci. I don't think that Togashi would name Zushi as "Zushi" in some part of the manga when he intentionally wrote his English name as "Zooci" in his databook, it's pointless.

There are more cases where English was used instead of Hunter Language although I don't remember all, but we can assume that Hunter World has two major languages, and these are Hunter and English.

Most writing in HUNTER x HUNTER is in a syllabary, rather than an alphabet, that correlates exactly to the syllabary of the Japanese written language (hiragana and katakana). A syllabary is a set of written symbols that represent the syllables which make up words; a symbol in a syllabary is called a "syllabogram." (In contrast, an alphabet is comprised of letters.)

Romaji is the application of the Latin script to write the Japanese language, not the Latin script itself. In romaji, 「キルア」 would be written as Kirua. Romaji does not include the letter "L."

Thus, these scans you provide show a language that is most likely English, based on the inclusion of the English word "To." It appears that "Killua" is the intended English spelling of 「キルア」.

The syllabary is the primary written language of the HUNTER x HUNTER world and is therefore used on official documents, etc. but it is not the only language that exists in that entire world. Since キルキゾルデイック's useful answer was unfortunately deleted from this SE, I will also add here キルキゾルデイック's answer that Leorio's cell phone, the Beatle 07, boasts a translation tool that can translate over 200 languages. If a person never or rarely comes across other languages in the HUNTER x HUNTER world, a translation app would not be a useful feature that customers would fork out 200,000 Jenny for; that this is valued as a feature of the phone implies that it can be very normal to come across written languages other than the syllabary.

Although there is no stated reason for the inclusion of English specifically in the HUNTER x HUNTER world, the world includes linguistic elements that are shared with or based on our real world, which make up at least a portion of the 200+ languages that are stated to exist. Just as if you visit Japan and see that most documents and signage are printed in the official language (Japanese), that does not preclude any Japanese person from writing something in English, or French, or Arabic, if they so desire at any given time; the person writing does not need to provide a specific rationale for this to be considered normal behavior. In the same way, the HUNTER x HUNTER syllabary is what we see most often in that world, but since it is not the only language which exists in that world, any character at any given time can opt to write in another language that exists in that world, according to his/her personal preference.

As another example, the character ハンゾー (Hanzo) is from the 国家 (kokka = nation) of ジャポン (Japon), which is clearly based on Japan, since he is the only one who knows how to make 寿司 (sushi) in the ハンター試験 (Hunter Exam) and he bears a ninja motif. "Japon" is an exonym for the nation of Japan. An exonym is the name of an ethnic group and where they live, which is applied to them by outsiders (in contrast to endonyms, which are the names used by the group itself, such as 「日本」[nihon], 「日本（にっぽん）」[nippon], 「大和」[yamato], and「和」[wa]). The English word "Japonism" comes from this exonym.

As a fourth example, Netero wears a baseball tee with the Japanese or Chinese word 「心」 (kokoro) on it. Some characters, including Netero, have names with origins in languages from our world (his first name is アイザック [Isaac], the katakana pronunciation of the English pronunciation of the Hebrew name יִצְחָק [Yitzchaq], which means "he laughs").

Thus, this case is not out-of-place according to the worldbuilding that the mangaka, Togashi Yoshihirou, crafted. Rather, it fits with his precedent of including spoken and written languages other than the syllabary in the HUNTER x HUNTER world.

1
Is Kanji part of their writing system besides their unique alphabets?