What is the Evangelion reference Araragi was talking about?

At the beginning of Nisemonogatari before the opening, we see Araragi chained and handcuffed in the cram school with Senjōgahara being the perpetrator. At one point, Araragi said that he would be enjoying the moment more if it wasn't for the Evangelion reference.

What is the reference he was talking about? I didn't see anything which hinted at an Evangelion reference.

Adding onto the other answer, the exact thing that gets interpreted as an EVA reference is Senjougahara's line:

It is clear that this is probably the content of the "reference", as Araragi makes the comment about wanting "no unnecessary Evangelion references" right after this line.

This is nearly identical to a line between Shinji and Rei in episode 6 of the EVA anime, as mivilar has pointed out. In that episode, there is an Angel attacking NERV, which has so far repelled the attacks against it. The solution is to use a very high-power rifle against the Angel from a distance, with Rei acting as a back-up or shield for Shinji.

Prior to the start of the mission, Shinji is worried, and asks Rei if she is scared. In response, she tells him that he shouldn't be scared, that "you won't die; I'll protect you." (The exact wording probably depends on the subtitle set.)

Aside: Naturally, this suggests that the EVA line is rather notable (something which did not occur to me when I first watched EVA). I would suspect that it has become so partly because of the pacing of the specific scene. Perhaps it's also easier to catch the mirroring of words in Japanese, as this is not a line with very idiosyncratic vocabulary. (Compare to Senjougahara's reference to Fullmetal Alchemist in Bakemonogatari, where the exact ordering or wording of "X kilos of A, Y grams of B, . . ." doesn't matter too much in terms of the ability of a watcher to catch the reference.)

This is referencing the conversation between Shinji and Rei in episode 6 while preparing to engage Ramiel. At least that's the best I could think of and evageeks agrees. 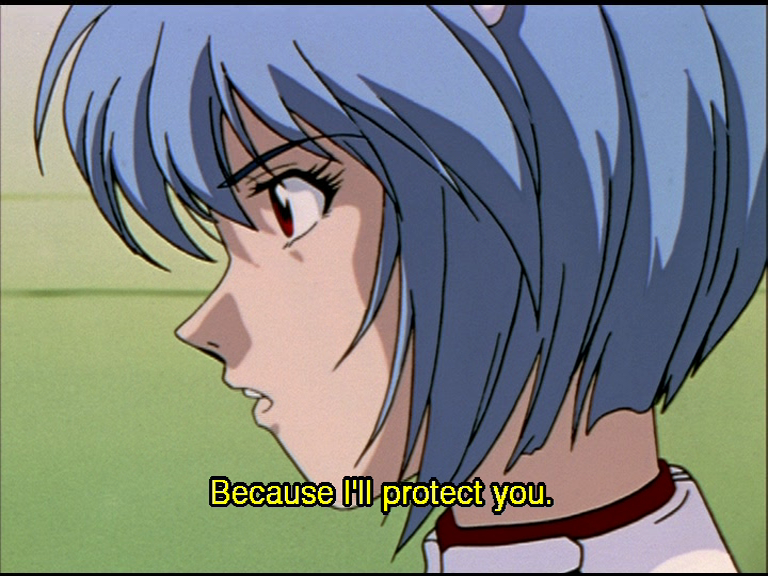 Not the answer you're looking for? Browse other questions tagged monogatari-series neon-genesis-evangelion or ask your own question.

11
Have the Rebuild of Evangelion films revealed anything new about the original Evangelion TV series?
14
What references to psychology exist in Evangelion?
7
What book was Hanekawa reading while Araragi tries to find where Tsunade lives?
16
What animes or trends in anime was Evangelion a response to?
4
What dance is Araragi dancing?
5
Where was Araragi when he helped Tsubasa Tiger?
5
What exactly is the relationship between Araragi and Shinobu?
6
What powers does Araragi have after he was cured?
3
How does Araragi know Ougi in Mayoi Jiangshi?