who are Stripism a parody of?

One of the most popular anime shows in Akiba's Trip: Undead & Undressed is Stripism. Here's a screenshot of them in-game (in their own game). 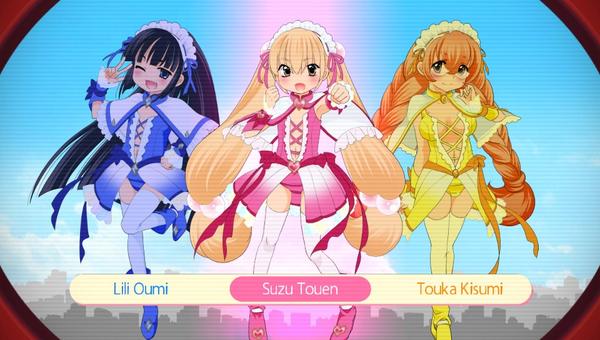 I'm somewhat inclined to think they're a parody of Pretty Cure because of their vibrant colour scheme, but it's got a load of different series so I'm not sure if they are or not.

At one stage the Akiba's Trip girls cosplay as the characters, so possibly some of that bare skin is fan service on AT's part: 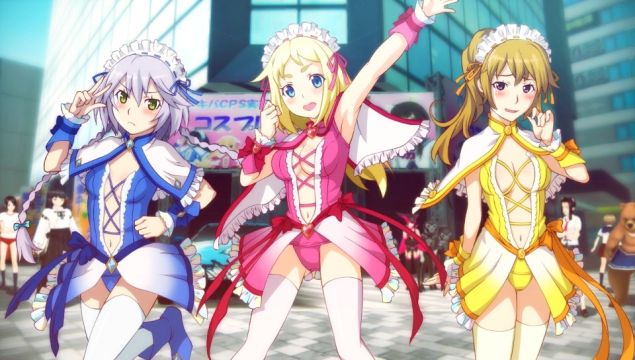 Are the Stripism girls a parody of Pretty Cure? Or any other anime series?

「秋葉少女ストリッピスム」 (Akiba Shoujo Stripism) in Akiba's Trip: Undead & Undressed is not a parody of Pretty Cure specifically. Pretty Cure is a rather new franchise that started in 2004, which itself draws from mahou shoujo series dating from the 1990s.

Akiba Shoujo Stripism also parodies the genre of mahou shoujo-mixed-with-sentai (live-action team fighting) which began in 1991 with Sailor Moon: this is clear because the characters are battling in the game, whereas Pretty Rhythm does not contain any fighting, and it looks like the characters attack using magic.

Akiba Shoujo Stripism is not a parody of the majority of mahou shoujo series. Before Bishoujo Senshi Sailor Moon, the long history of mahou shoujo series were usually EITHER one girl who could transform into a magical version of herself (Himitsu no Akko-chan, Mahou no Yousei Persia) OR one magical girl from another world who is temporarily living in our world and uses an Earthling disguise except for when she needs to transform into her true self to use her powers (Majokko Meg-chan, Mahoutsukai Sally, Mahou no Angel Sweet Mint). In both cases, she was not part of a group dressed in vibrantly-colored complimentary costumes. (Magical girls living solely in magical worlds, such as Kero Kero Chime or Akazukin ChaCha, do not technically fall within the genre of mahou shoujo because everyone in their world is magical; a mahou shoujo is a girl with magic powers in a generally non-magical world.) In some cases, a magical girl's identity allowed her to work as an idol (Mahou no Star Magical Emi, Mahou no Tenshi Creamy Mami, Cyber Idol Mink, Full Moon wo Sagashite), which drew mahou shoujo closer to the ordinary-girl-suddenly-becomes-an-idol sub-genre in shoujo (Idol Densetsu Eriko, Idol Tenshi Youkoso Youko, Chou Kuse ni Narisou and, of course, now Pretty Rhythm and its spin-off, PriPara).

Most of the occasions for which the pre-Sailor Moon magical girls transformed were for day-to-day events, NOT for battling or trying to save the world. At the same time, there was a long history of live-action sentai (team fighting) series, which created the group-dressed-in-vibrant-colors scheme (a famous example is Power Rangers which is adapted from Kyouryu Sentai Zyuranger). Sailor Moon was the first series ever to combine mahou shoujo with sentai: a colorful team of magical girls trying to save the world. Ensuing mahou shoujo-mixed-with-sentai series, such as Pretty Cure, Tokyo Mew Mew, Ai Tenshi Densetsu Wedding Peach, and Cutey Honey F, are rather obviously Sailor Moon-inspired (if not knock-offs).

Akiba Shoujo Stripism in Akiba's Trip: Undead & Undressed is a type of parody targeted at adult male viewers (whereas real mahou shoujo are a subset within shoujo, meaning they are targeted at an audience of young girls and if there is a manga origin or adaption, it runs in a shoujo manga magazine). Puella Magi Madoka Magica is the currently well-known example of this strain of parody for adult males (which, unfortunately, gets referred to as being "mahou shoujo" proper, confusing people on what mahou shoujo is and isn't). Though Madoka Magica has clearly struck a chord for that demographic, it is not the first series-for-male-viewers to adapt the mahou shoujo genre. Cutie Honey was a successful men's version of the mahou shoujo genre (with a stripping theme), but it surprisingly ended up coming full circle by getting adapted into the actually shoujo series Cutie Honey Flash, which was marketed to girls. Project A-ko parodied mahou shoujo back in the 80s and there have been plenty of other shounen parodies since (Mahou Shoujo Pretty Sammy, Mahoutsukai Tai!, Mahou Shoujo Lyrical Nanoha, etc.).

The screenshot of Stripism features the three main characters of Kodomo no Jikan.

From left to right, they are Kuro Kagami, Rin Kokonoe, Mimi Usa. 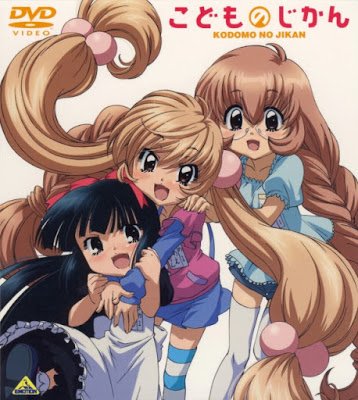 I'm not entirely sure what their outfit is reference of, though. However, PreCure does seem to be a close match, except for the design of the clothes, which may have been altered for the purpose of the game.

Not the answer you're looking for? Browse other questions tagged pretty-cure akibas-trip or ask your own question.

4
Have the creators of Tokyo Mew Mew or Sailor Moon commented on the similarities?