Are the visualizations in the anime from the Light Novels?

During Karen Bee in Nisemonogatari I've noticed some weird scenery, one is after Kanbaru and Araragi clean up Kanbaru's room we see there are books stacked outside in small structures.

Another is when Araragi is talking to Senjougahara about Kaiki, Senjougahara seems to be building with the sharpened pencils, at one point when the table is slammed a group of them fly up into the air and land next to Araragi forming a different structure.

And another one is when Karen confronts Kaiki and the walls seems to act as TV screens. at one point when Kaiki is talking about money, on the wall we see coins fall into place forming notes with what looks to be Araragi's face on them.

Now there is a lot of other strange scenery like this but i am wondering, are these actually described in the Light Novels or are these artistic choices chosen by SHAFT when making the anime? if so is there a statement as to why they made these choices?

I can't speak for those situations in particular I think this is probably an artistic choice by SHAFT. Having interesting things going on in the background makes the long dialogue sections more bearable for viewers and helps break up long sections in the same room.

I'm not up to date with the light novels, but I have reached Kanbaru's story. Here's a translation of the passage where Araragi appears at her house (Suruga Monkey).

Her futon was left spread out on the floor, clothes (including panties) were strewn all around, as were books of all sort, textbooks, novels and manga, some open and some closed. It almost seemed like her storehouse, with cardboard boxes piled up into mounds in the corners. The worst atrocity was the garbage casually left not in garbage bags but just on a random tatami, or sometimes, to the best of her ability, shoved into the plastic bags from the neighborhood convenience store and then left lying around. Rather, it seemed as though the concept of a container for housing garbage was entirely foreign to the room. Even with its expansive 12 tatami space.Not even a single space to start going in from.

"Sorry that it's a little messy"

While not Nisemonogatari, this is Shaft's depiction of Kanbaru's room in Bakemonogatari: 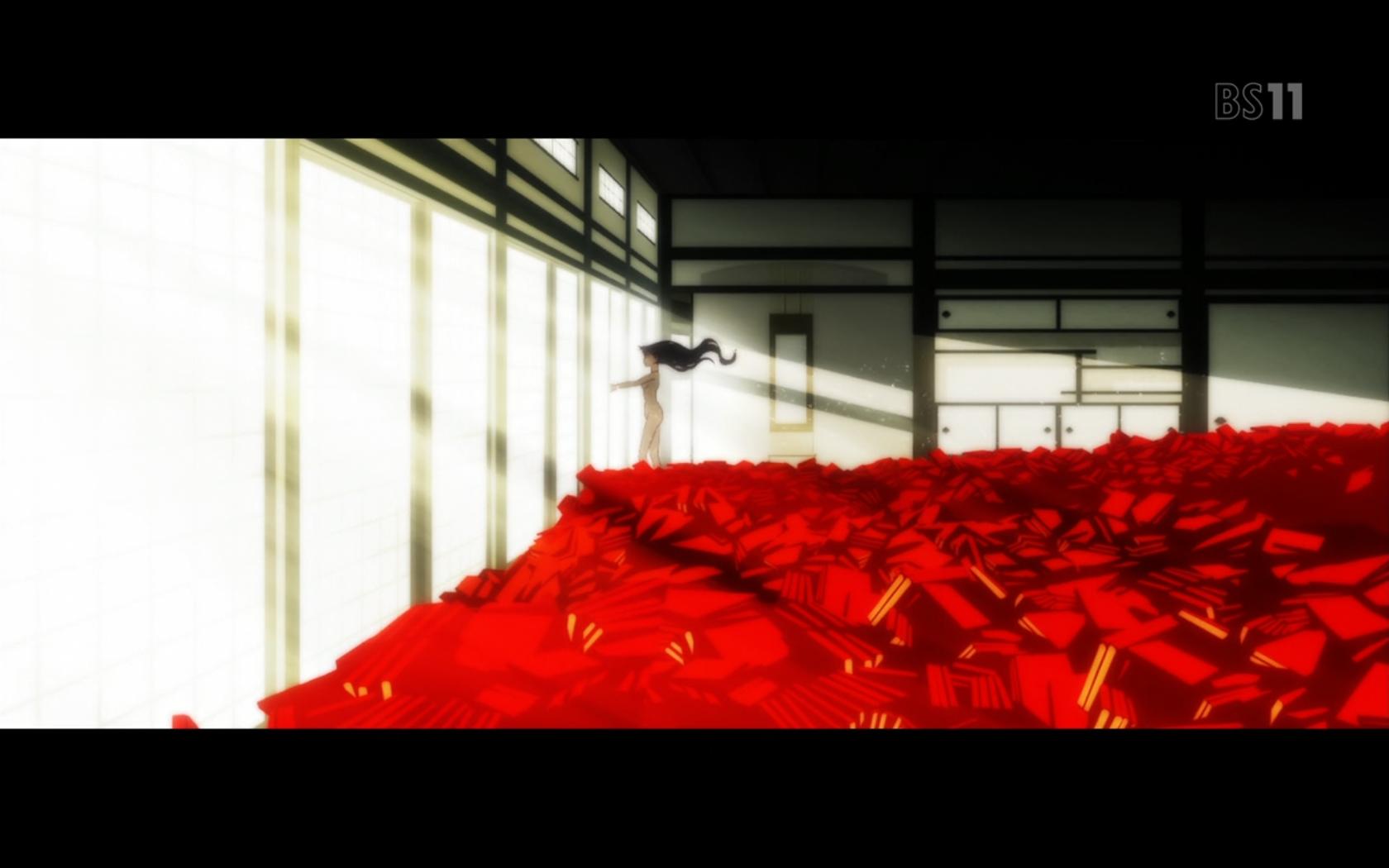 SHAFT moved the focus from garbage onto books, and expanded the size of the room tremendously (but SHAFT does like to do that with rooms).

Here's a video I found on youtube of a 12 tatami mat room . So it's quite big, but not quite as large as SHAFT depicts. Using some size guides, I worked out that 12 Tatami Mats is roughly 18.36 square metres.

SHAFT also animates kanbaru opening several doors, including one which causes a landfall of books to land on Araragi.

"I know now's not the time, but can I ask you for a favor." "Sure. Say anything you want. I wouldn't refuse a request from you, Araragi-senpai." "One hour, actually, half an hour's fine... Just give me some time to clean up this room. And a big garbage bag." It's not like I'm a clean freak, I don't really even keep my room that clean, but this was just too horrible, one could even call it cruel. Kanbaru stood and started at me with a puzzled look on her face, as if she didn't even understand what I had just said, however, without any particular reason to refuse, she simply said "OK" and left to get a garbage bag. Fast forward. I suppose. Of course, the disastrous wreckage that was Kanbaru's room wasn't so soft that much could be done about it in a mere half an hour. And in any case, this still being the room of a girl who I didn't know that well, there were areas that I could and couldn't ethically, or rather morally, touch. So, I gathered up the garbage and organized (simply sorted by size, as there weren't even any bookshelves in Kanbaru's room) the various books and magazines in an admittedly random way, cleaning the square room into more of a circle. The room was at least at a state where I could look at it after the futon was folded and stowed in the closet and clothes folded and placed in a corner. At the very least, there was space for Kanbaru and I to sit and face each other.

In the animated version, it shows an area where Kanbaru fit perfectly (implying it was the only free area). Kanbaru and Araragi play in the books throwing them around and jumping into the sea of novels.

So, I'm not sure about those particular cases - but SHAFT does take significant artistic control over the work - adding scenes, emphasizing certain characteristics & generally filling the work out to fit an animated form. As you can see from the passages the novels aren't description-heavy. They are dialogue-heavy though, so I imagine that SHAFT has done these things themselves.

13
Are all apparitions on Monogatari based on actual stories?
2
Does Koyomi ever get more powerful in the Anime or Light Novels?
5
Who are the other two girls whose hair Araragi has cut?
18
Who are all the girls fawning over Araragi?
3
Are there conditions to whether Yozuru Kagenui walks on the ground or not?
2
Is this picture of Oshino Ougi light novel art or fanart?
0
Where can I buy the English translated of Monogatari light novels?