Anime about a guy who becomes a girl's spirit familiar [closed]

About two weeks ago, at a Funimation panel, they were showing off some anime that they had recently dubbed. One of the anime they showed caught my eye, but I completely forgot what it was called.

As far as I can remember, the plot went something like this:

By some random circumstance, this guy (I assume he's the main character), a human, becomes this girl's spirit familiar (or something). Then they go to a special school.

Yep, that's what my brain remembers. If anyone has any clue as to what I'm talking about, please help.

I was at ACen 2015 (15-17 May, so two weeks ago) when I heard about this. I honestly don't remember anything about how it looked like, but the series couldn't have been more than 3 years old.

Given it was recent and from Funimation, I'd argue that it's Tokyo Ravens, rather than Familar of Zero. Both are good series though, so do check them out.

Figured I'd give a small quip from work...

It could be The Familiar of Zero 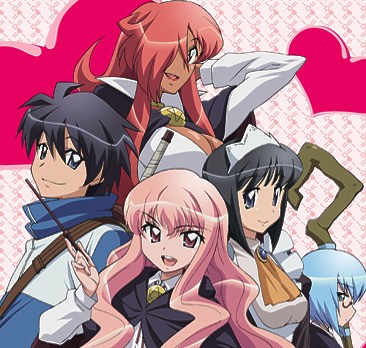 Meet Louise, a budding magician. The students at the Tristein Academy call her "Zero Louise", due to her current record of zero successes with magic. In fact, her magic tends to go spectacularly wrong. Now, as an important test of her aptitude for magic, she must summon a familiar to be her servant. At this critical moment, she summons up all her magic and wishes for a familiar that is "devoted, beautiful and powerful", and gets... Hiraga Saito, an ordinary Japanese boy. It's difficult to say who is more surprised and dismayed, but the rules don't allow for second attempts. Louise is stuck with her strange familiar, and he with her.

By some random circumstance, this guy (I assume he's the main character), a human, becomes this girl's spirit familiar (or something).

This would be Hiraga Saito, as the description of the series points out he is an ordinary Japanese boy and becomes the Familiar for Louise

Then they go to a special school

Saito starts going to the same school as Louise, Tristein Academy, because he is now no longer of Earth but instead another world

at a funimation panel, they were showing off some anime that they had recently dubbed

FUNimation Entertainment did at one time have the licenses to distribute The Familiar of Zero, however these licenses have since expired and now owned by Section23 Films (Since 2014)

That sounds like Zero no Tsukaima or The Familiar of Zero.

Visit its Wikipedia article to verify whether it matches your description.

It's one of my favorite, and it already has season 2.

Not the answer you're looking for? Browse other questions tagged tokyo-ravens or ask your own question.