What is the meaning of "Argonaut"?

In episode 9 of Is It Wrong to Try to Pick Up Girls in a Dungeon? (DanMachi) Bell learns how to use an Argonaut skill which Hestia refers to as a skill for a hero.

What is the literal meaning of Argonaut when used in this context?

In DanMachi's universe, Argonaut is the name of the story of a boy who wants to be a hero, according to the conversation between the Loki familiar members from 17:16 in episode 8:

Finn: It's the story of a boy who wants to be a hero, yeah.

Tiona/Tione: I liked that story, too.

However, that is not its first mention in the story. Argonaut appeared as early as episode 5 as part of the visual, when Bell was answering the question posed by the grimoire, as to what he sought from magic (the image corresponds to the bold line):

Bell: What do I seek from magic?

Bell: The woman who's faster than anyone, like a lightning bolt... I want to catch up to her.

Bell: Is that all?

Bell: If it were possible... I'd like to be a hero. Like in the fairy tales I read when I was a kid. A hero they'd be satisfied with.

Bell: You're such a child. 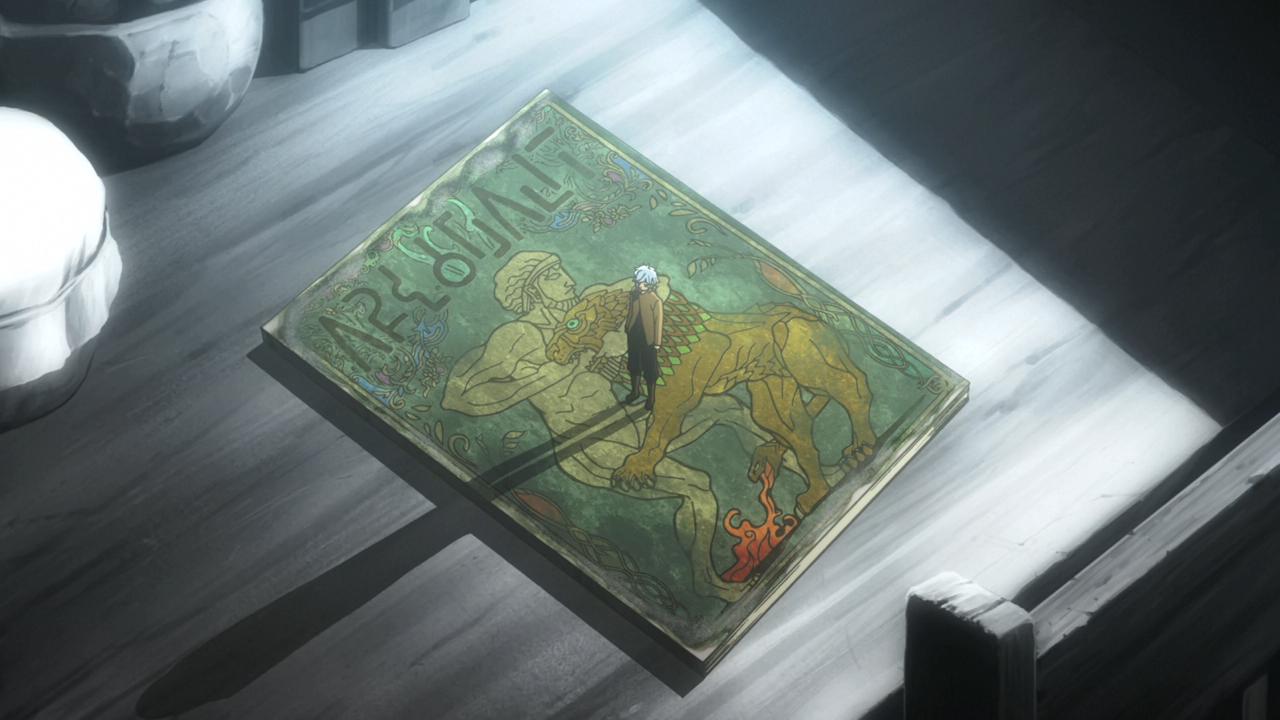 While the alphabets are distorted, it still bears a lot of similarities to English alphabet, especially A, R, U, T.

I don't know whether the light novel reveals the name of the fairy tale in this scene, though.

The fact that Bell attained the skill Argonaut, which is named after the story of a boy who wants to be hero, signifies his strong desire to become a hero, which is the meaning of the kanji in the title of episode 8 [英雄願望]{Argonaut}.

Argonaut has a number of meanings, but in this case is simply another word for Adventurer, Hero, Quester etc.

thefreedictionary.com gives the definition for 'argonaut' as:

A person who is engaged in a dangerous but rewarding quest; an adventurer.

Further down that same webpage, the thesaurus provides a description of an argonaut as:

Someone engaged in a dangerous but potentially rewarding adventure

A person in quest of something dangerous but rewarding; adventurer.

It seems that an Argonaut skill is simply a skill for an adventurer to learn, and Hestia's comment appears to confirm that.

As mentioned in my above comment, (and as I originally thought before research) Argonaut also refers to any man who, in Greek Mythology accompanied Jason on his quest for the Golden Fleece aboard his ship, Argo. This may well be where the word originated from due to it's Greek/Latin origins, but that's a different question for another day!

Argonaut story in Danmachi universe, as recalled by Bell in the volume 4 of the light novel:

That is a myth where a boy with no special skills headed to rescue a princess kidnapped by a Bull Monster.

The protagonist was often deceived, he did not even know that he was deceived. The story advanced in a slightly ridiculous manner, then, the protagonist finally reached where the monster was located. In the end, it seems like he was saved by the princess-sama who was waiting to be rescued?

My grandfather who claims that he likes this story says “This guy becomes more amazing later on” and laughs. Compared to that, I would pout and say “This story is already finished”. —— This memory, even now, I still remember.

Hence, it is a desire to become a hero, because in the story the boy never actually became one.

As Goddess Hestia has said in the end of episode eight, Argonaut is the name of the skill Bell has achieved. She said that it is a skill of wanting to be a hero. And it proved that it is so, when it activates every time he wants to save somebody. So I think Argonaut could be defined in this anime as "the hero in you", much like the literal meaning of it and in which the Argonaut skill actually gives you the power to fulfill your desire to be a real hero whenever your desire (for wanting to be a hero) wakes up.

Not the answer you're looking for? Browse other questions tagged danmachi .

7
What is the usage of the stones monsters drop?
3
Do Gods and Goddesses regain their power inside dungeon?
6
Who enforces the rules that the gods must obey?
1
What does the Valis symbol in Danmachi look like?
16
What are the stats in DanMachi?
9
How do the adventurers know the floor boss's names?
5
At what chapter of the manga does the first season of DanMachi conclude?
1
Which adventurer has the highest level?
2
Why couldn't Bell "save" Artemis at the end of the movie "Arrow of the Orion"?