Wouldn't Yuta destroy the world every time he takes a bath?

Yuta Iridatsu has a strange power:

If Yūta sees a girl's panties twice in a row, the Earth will be destroyed by a meteor.[1]

always was a boy inside a girls' body for a long time, ever since the accident when they escaped the lab.

Meika seems to be the only one that knows Yuta is biologically female - until she reveals the fact to the other tenants before the new year.

Since it is an original anime series, there is little canon material outside the videos themselves.

Ranma could change back into a boys' body, but nowhere in the whole series he got turned on by his own female body. There were times when he was embarassed, but even when male and female Ranma got separated, there were no chemistry between them, at least from the male side. (chapter ref pending).

We can also bring the panty fanservice that is abundant in shonen titles.

These factors all come into play for the Japanese panty fetish. First, panties were long associated with the risque. Not only do they cover up desirable bits, but they also have a strong association with high-class prostitution. Second, panties tend to reflect a lady’s personal tastes in fabric, lace, and design. They also have connotations of wealth since originally only the wealthy could afford such luxuries. Finally, the up-skirt shot originated from when women were adapting to the less constrictive Western styles and developing feelings of shame with underwear exposure. These associations merged into the panty fetish and fan service we see in Japanese culture and anime today. (ref)

Also, Yuuta uses boxers. Maybe it gets a little loose in the front, but lets assume he is used to it.

In ep9 flashback at 15:30, Narugino and Yuuta stumble onto each other on the front porch, causing Yuuta's bag to burst open. Narugino accidentally grabs one of Yuuta's boxers. 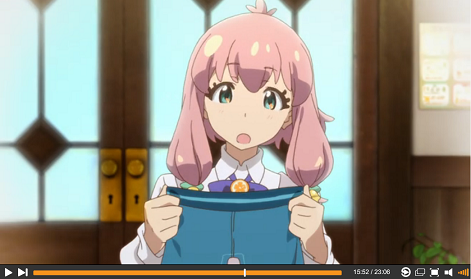 So, from these arguments:

We can then add the final statement: When he returns to his body in ep7, Chiranosuke (the ghost cat) tells him that if his Uberfy goes overboard in his spirit form, the physical body (possessed by another timeline's Yuuta) dies.

So, if he bathes on his physical body, he would only drop unconscious from over Uberfy-ing if he did Uberfy from his own female body (we showed he wouldn't).

Also there is the issue if viewing the same thing twice in a short time counts as two viewings. Every time he blew up he had seen two separate sets of panties.

This might seem kind of stupid, but maybe it doesn't work on him. Maybe he just sees himself as a male, and not a girl.

Not the answer you're looking for? Browse other questions tagged punchline or ask your own question.