Did “Fairy Tail” plagiarize “One Piece”?

As shown in the following pictures, there are so many similar scenes/character designs with One Piece: 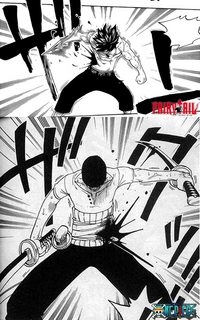 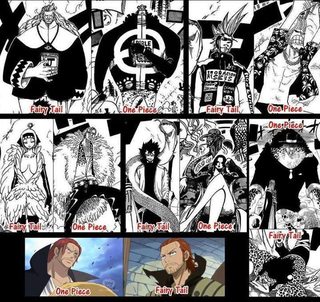 Plagiarism is a legal crime and thereby its definition and how it is handled differs by nation (also, plagiarism and copyright infringement are two different things). For example, in the U.S., an illustration that draws upon previous works by others must be different enough that a specific source for it cannot be pinpointed and that multiple possible sources cannot be presented (to mash-up a couple of works and/or to change the pose slightly can be enough that it does not constitute copyright infringement). Some of the illustrations you include above are not clearly similar enough to count under that sort of definition.

However, Japan is not a country that is as concerned about plagiarism as many other nations. Plagiarism is generally thought of as poor behavior in the academic context and when infamous cases of it come out in the international sphere, an apology and possibly a retraction of the academic paper may be made: a recent example is the stem-cell research dissertation that contained almost identical portions to text posted on a U.S. National Institutes of Health website; the author "said she was 'very hurt' by the media hoopla surrounding the research" and the university "released a statement of apology it said was signed by Dr. Obokata and two of her co-authors. They said they 'humbly accept the various suggestions made about the flaws in our paper' and were discussing a retraction . . ." Some universities do not even prepare and distribute a plagiarism policy, professors vocally welcome plagiarism (I heard the other day a prof say in a room of fellow instructors and students that it is fine for students to plagiarize speeches as a way of practicing English), and unwelcome plagiarism noticed by professors is often not reported (instead, the work is graded according to its quality or the student fails the course. If the plagiarism is reported, the prof must fill out lots of paperwork and the student fails the course anyway, which means the same student may be back in the same class next semester and the same prof has to deal with him/her again, so failing the student quietly or grading the work on its own merit [usually not high quality] can be preferred. This is especially true because once the paperwork is filed, the school administration can decide whether or not to give the student any consequences or can tell the prof to please go ahead and pass the student).

In standard publishing, plagiarism is usually dealt with by simply making a public apology, or an expression of regret (which carefully avoids technically apologizing), and possibly withdrawing further sales of the publication and/or the plagiarist promptly retires (a culturally well-thought-of means of demonstrating that you were not qualified to have that role; if a Japanese company makes a major blunder, often the boss will announce retirement to take the blame): see the examples in the Japanese Wikipedia page on plagiarism. In only two of the cases listed there did the victim press charges and file a lawsuit.

Japanese are often assuaged by, or really the only thing they wanted out of their complaint is, an apology. In Japanese culture, it is rude to explain in an apology why the thing happened (i.e. if you are late to class, only say you're sorry for being late; do not mention whether your mother just got rushed to the hospital or the train got delayed from a suicide on the tracks or you overslept. They want the apology only, and it is more polite to make it as succinct as possible).

To sue over plagiarism, the victim who was wronged (the publishing company that owns the plagiarized work, or possibly the author of the plagiarized work) must have a desire to sue; then it will come up before a prosecutor and then possibly proceed to court (sometimes the prosecutor determines that the defendant is not guilty, or for some other reason that it would not be best for the case to go to trial, and it dies in the prosecutor's office. Fictional examples of this can be seen in the Japanese live-action TV drama HERO). In Japanese culture, suing is not as common and viewed as respectable behavior as it is in some other countries. About a year ago at my Japanese university, a student was physically abusing another student and it was found out by an American international student, who reported it to the advisor. The advisor was angry that this was reported by the international student because it could look bad for the department, and the police came to campus to investigate but were not able to do anything because the victim refused to admit the abuse, since if he did so, his chance of getting hired by a Japanese company after graduation would sharply decrease: a person who reports misdemeanors is considered a trouble-maker that a company would not want to hire; the batterer went off scot-free. This is not the unfortunate case of every crime in Japan, but it is prevalent for victims to want to protect their standing in society by not getting involved in a police report or lawsuit.

Some character designs, and battle poses, are common enough in many manga/anime titles that no one could sue over them (such as hair styles like the long, black straight hair that waves at the bottom seen in Tomoyo in Cardcaptor Sakura and Tsubasa Chronicle, or the high ponytail with a wide ribon or sash seen in Kaoru in Rurouni Kenshin, or the shooting-straight-up spikes of hair like Gon in HUNTER x HUNTER).

It is also not considered plagiarism to pay tribute to a character/costume design that you like in a parody sort of way. Having your characters cosplay is the easiest way, like Hyouka's Ibara Mayaka's copy of Frolbericheri Frol's fashion in the classic shoujo sci-fi 11 Nin Iru! (They Were Eleven), but adapting a design in a way that incorporates originality while giving a big hint to the audience who you're giving a shout-out to is also unlikely to garner ill feelings from the artist who created the original character. As an example, Sailor Moon parodies appeared in Crayon Shin-chan and vice versa, even though the manga titles were not owned by the same publishing company nor the anime owned by the same animation studio (though both aired on the same TV channel), and here's a list of other series in which Sailor Moon was given a cameo appearance. 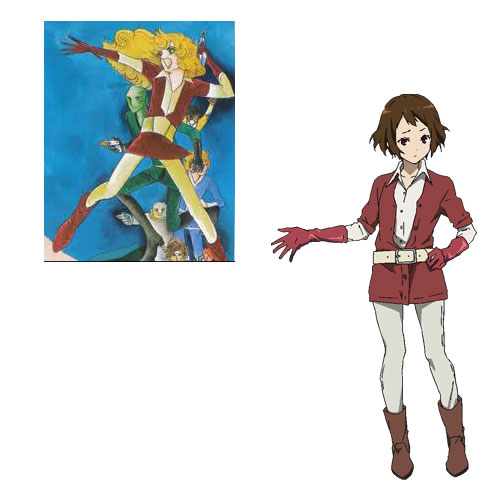 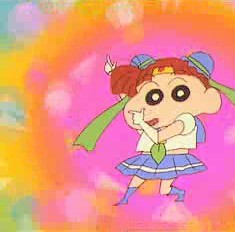 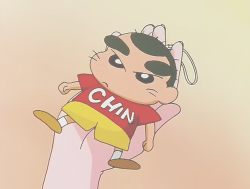 Ultimately, 1) plagiarism is not considered a major scandal requiring action to be taken and 2) a publishing company or the artist must have a desire to sue for plagiarism, which is not all that common in Japan. When Kamiya Yuu's illustrations were accused of plagiarism on the Twitter account rotiflride (which has since been suspended), no action was taken. When an element in the anime adaption of his No Game No Life series was discovered to be plagiarized according to another Twitter account, the production committee admitted this and issued an apology, and decided to replace the image for the DVD and Blue-Ray release. The specific artist who committed the plagiarism wrote a response which looks vaguely like an apology but which does not technically apologize.

Both artists have claimed Akira Toriyama (creator of Dragonball) is their biggest influence, and coming from the same art school I think it's likely enough they share a lot of other influences as well as possibly knowing each other personally as well.

Hiro Mashima's earlier work Rave Master was quite similar artistically to Eiichiro Oda's work & Fairy Tale as well. So, it's not as if Mashima's has purposefully made Fairy Tale similar in an art style similar to One Piece - It's just his own style.

And as mentioned before, there is only so much uniqueness that one can have in a show as long as both of the shows are. The combination of those two facts are probably sufficient to pass the comparisons you've shown as coincidence.

Regardless, I would imagine that it's not doing Oda any harm so he's chosen to leave it be if it was the case that there was some level of plagarism going on.

Not the answer you're looking for? Browse other questions tagged one-piece fairy-tail or ask your own question.

5
Are these One Piece characters based on western children's story characters?

18
Does Hiro Mashima (Fairy Tail) have something in common with Eiichiro Oda (One Piece)?
8
Which episodes of One Piece are filler?
0
Common characters in One Piece and Pirates of Caribbean
1
Did Whitebeard know where the One Piece is located?
5
Why is the written language inconsistent throughout One Piece?
5
Is it possible that marines are also trying to find one piece?
8
Which is the biggest character shown so far in One Piece?
1
What is One Piece doing to keep it one chapter/episode?
1
Was this samurai the inspiration for the blind general's character in One Piece?
0
Does Fairy Tail have one main goal / plot, or is it just many separate stories?