In the new manga mini-series, Sarada figures out the girl in glasses with Sasuke to whom Sarada seems to look like (the glasses, the face). I was wondering if maybe Sakura isn't her biological mother and that Sarada is a child of Sasuke and the other girl in picture.

Everything in this answer takes place after Shippuden ends and should be considered a spoiler.

In Naruto Gaiden: The Seventh Hokage and the Scarlet Spring Sarada is unsure of who her real mother is after finding a picture of Sasuke with Karin. Since Sarada had never meet her father she follows Naruto to meet Sasuke and find out the truth about her biological mother. When she meets Sasuke he says that its nothing to do with her and leaves it at that. 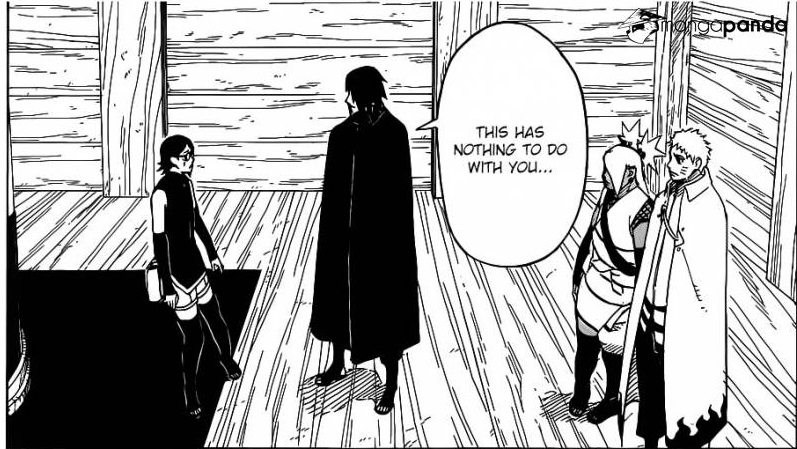 Later in Orochimaru's hideout Sarada ask Suigetsu about Karin to see if she was there in the hideout or if he knew who her real mother is. Suigetsu did know the answer but remembered that Karin had an umbilical cord in her desk. Suigetsu thought it was from Karin's birth. He then did a mouth swab on Sarada and preformed a DNA test. The test was a positive match. This leave Sarada to think that Karin is he biological mother.

It is later revealed that Karin could not be Sarada's mother because she was the one who delivered her. Karin tells Suigetsui that the umbilical cord he tested was Sakura's and that she was Saradas biological mother.

Some fans are stating as fact that Karin is Sarada's biological mother based on the result of a DNA test in chapter 700+7, but the test does not make this clear.

Sarada goes into it with the assumption that doing so will conclusively determine who her birth mother is. Her assumption is based on a photo she saw in chapter 700+1 of Karin standing next to Sasuke, who she believes to be her biological father. 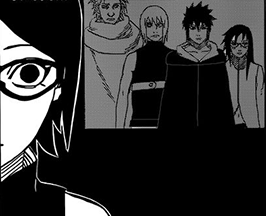 The result of the test is that she has a genetic match (一致, icchi: the image above from page 20). However,

= even if Sarada and Karin have a genetic match based on Sarada being conceived from Karin's egg, it is possible that Karin was not the birth mother (such as surrogacy, egg donation)

= the storytelling lead-up within the chapter to this scene implies that the reader should not put too much trust in genes alone through the following plot points. 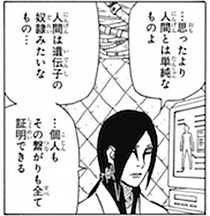 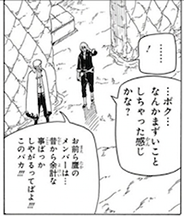 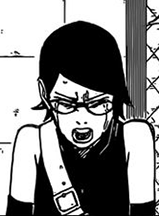 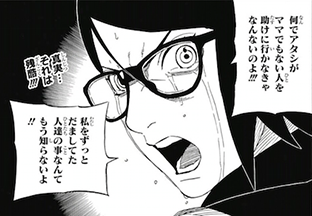 There is still room for someone other than Karin to be Sarada's birth mother. If the reader is meant to trust Sakura over Ochimaru regarding what a parent is, and to dislike Sarada's turbulent reaction to the genetic test result, the reader should not 1) interpret the test as conclusive, and 2) even if Karin is the biological mother, to not interpret Karin as the "real mother" because parenting is not simply about biological ties.

Whether Karin is Sarada's biological mother or not has not been stated in canon, but adoptive mothers are real mothers in the full sense of the word, so Sakura is Sarada's "real mother" even if Karin is her biological mother. Likewise, adoptive daughters are "real daughters" of the parent/s who raise them without being related biologically. The relationship between adoptive mother, adoptive daughter, and birth mother is given a careful treatment in Kodomo no Omocha (also known as Kodocha or Child's Toy) manga volumes 3 to 4 and in episodes 17 to 19 of its anime adaption. For more information about the complicated situations of people who grow up without knowing who their biological parent/s are, see the documentary films The Invisible Red Thread, Birthplace Unknown, Foster Child, Anonymous Father’s Day and Breeders.

Karin (the other girl you're talking about). It's a very minute possibility that Karin is the mother of Sarada.

8
Sources for Christian themes and motifs in Naruto?
5
How did so many people get away with cheating during the written portion of the Chunin Exam?
2
Which episode does Sakura tell Lady Tsunade to not to overestimate Shikamaru?
1
Were Sakura Haruno's parents ninjas?
4
Why did Karin keep the umbilical cord, if she's not Sarada's mother?
7
Has Sakura expressed signs of love towards Naruto?
1
Is Kabuto better than sakura in terms of Medical Ninjutsu?