Did Kazuki get a new body?

In the Grisaia no Rakuen, it is revealed at the end of episode 5 that,

Kasuki is still alive as part of the Thanatos system.

She gets a body. 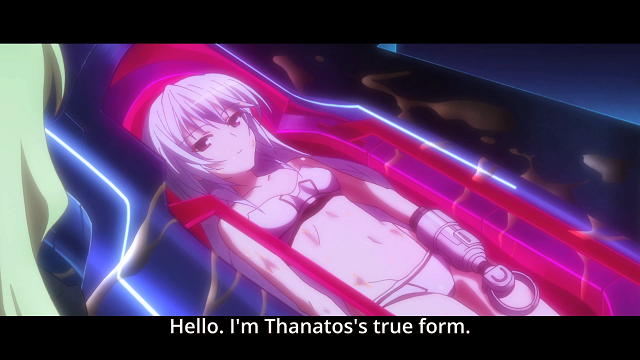 Kazuki's body doesn't seem to have aged though it may be difficult to tell. Either way, that doesn't give any new information.

When Kazuki was sold to make the Thanatos system, the system creators were faced with a dilemma:

how to keep the brain alive.

Their original intent was to

But then they would have to deal with a "little" problem:

they would need to supply nutrients, oxygen, antibodies, leukocytes, and all sorts of stuff to the brain.

That would require additional machinery/technology, but then they realized that

a human body already does all that, you just have to shove food and oxygen through the mouth and nose.

So they decided to ditch their original plan and

About Kazuki's body not aging, she was 12/13 years old when the accident happened.

Her body was not frozen. It was kept in a vegetative-comatose-ish state. In the visual novels, she is very debilitated when rescued by JB, and had to be carried out of Ichigaya by the German blonde.

Also a spoiler of future episodes, so don't read below:

the hook in her hand (the one she injuried in the bus crash) is fake. Her arm/hand is fine and she thinks she is making a great pun, but Kazuki is running for worst sense of humor in a VN/anime character ever. Who gave her that grappling hand in the suspended animation chamber, it is stuff for another question.

According to wikipedia, females end puberty earlier than males, and reach an adult body earlier too:

So, we can assume Kazuki grew around two more year's worth since the accident. Her body frame was always petite and she was precocious in several aspects, why not puberty? She was around the same size as Amane during the accident, so maybe her growth spurt had already happened by then.

She was sexually active since a very tender age. Her favorite food is Yuuji (eden ep.6), nuff said.

Probably that caused her puberty to have an early onset.

2
What did Yuji do to his sister Kazuki?