What are those zigzagged folded paper things you see in supernatural anime?

In a lot of supernatural anime, like Shin Sekai Yori, or Tokyo Ravens there often appear these large ropes with folded paper things hanging from them: 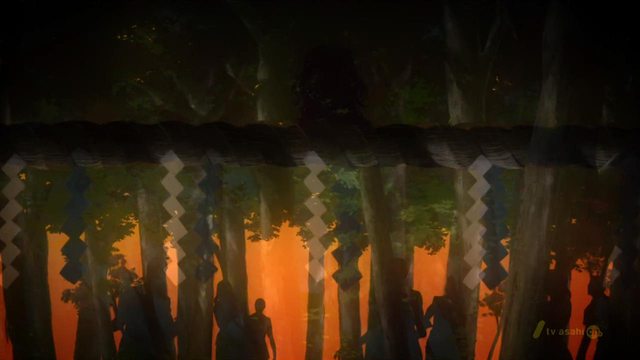 As far as I can tell, they serve to seal or mark places that are sacred or in some way supernatural, like shinboku, or holy trees:

What are these folded paper things, and what purpose do they really serve?

The zigzagged paper streamer things you mention are called "shide." They are in essence wards for purification. They are often seen with the rice straw rope they are attached to are called "shimenawa." Together they marks the boundary to something sacred (or rather mark the boundary between the sacred and that which is not) and can typically be found can be found on torii gates, around sacred trees and stones, etc. They are intended to keep impurities out and purify the space within.

As the same time, they can also be use to prevent, or rather seal the passage of gods. According to the Kojiki (a oral collection of myths forming the basis of the Shinto religion.), shimenawa was first used to prevent the sun goddess Amaterasu from re-entering a cave to save the world from eternal night.

In the Shin Sekai Yori anime, it's mentioned "evil spirits" and "monsters" are roam outside the town and any child who ventures out alone would suffer terribly. Hacchijoume is the shimenawa that encircles Kamisu's District 66, erecting a sacred barrier that protects the town from outside forces.

The Zigzag-shaped paper streamers are called Shide and are used in Shinto rituals. They can be seen in many animes that are located near Shinto shrines. To create one you can cut out a piece of paper like the diagram below and fold the paper along the dotted lines.

Not the answer you're looking for? Browse other questions tagged culture or ask your own question.

4
Rope with pieces of white cloth - What is it?