How is Lola (a general zombie) able to do what she wants?

During Thriller Bark Arc, it was shown that all general zombies are under the command of Absalom and all zombies must follow the orders of their commander.

The answer can be found when Moria infuses Oars' body with Luffy's shadow, in Chapter 457. Moria is the Master of Shadows; when he is talking to a shadow directly, he has complete control over them. Therefore, it is during that time that he needs to give details directives to the shadows before he infuses the shadow in the Zombie's body.

For example, if he does explicitly state that the shadow should forget everything about his past, his personality might remain with the Zombie. Note that Luffy's personality remained at first because of the size difference between the shadow's original body and Oar's.

As Dr. Hogback states, they were not always aware of those rules and therefore made some mistakes with a number of Zombies (the only confirmed case is Cindy). We can however extend that theory to other Zombies which did not necessarily obey their masters perfectly, like Lola.

(For conciseness purposes, only part of pages 4 and 5 are shown.) 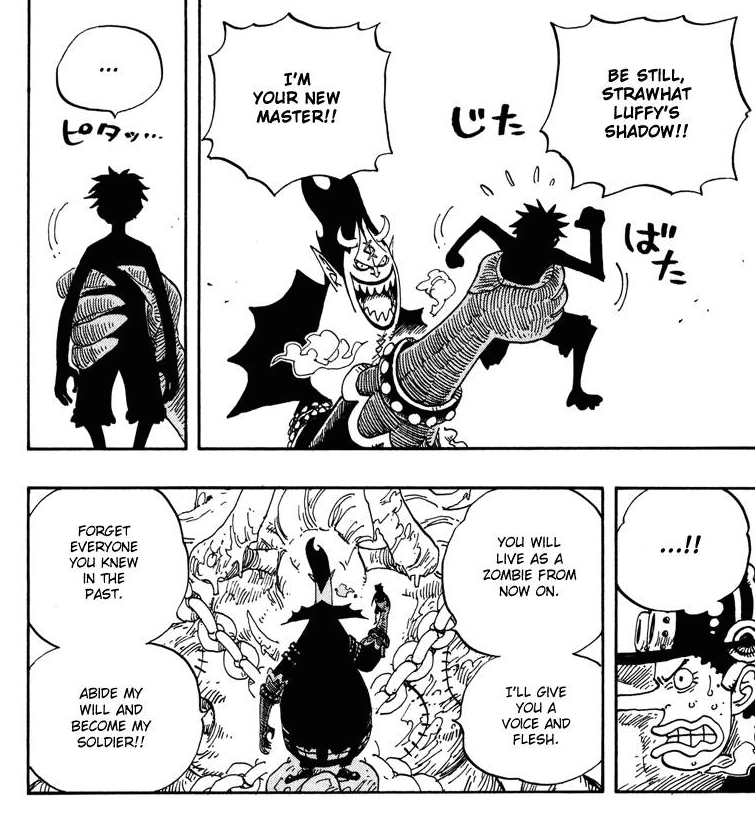 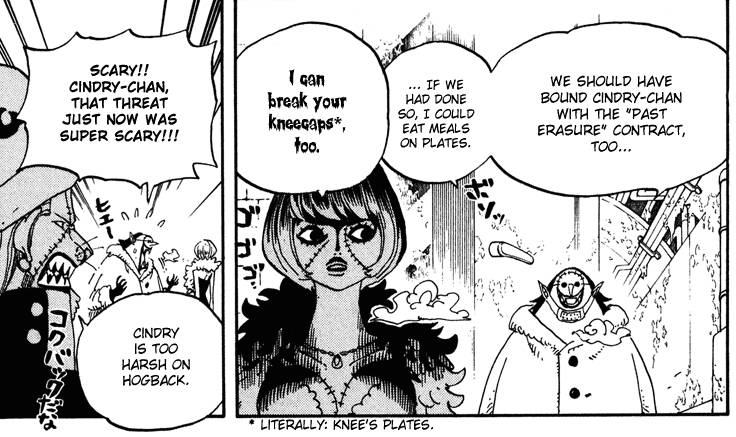 The Zombies are created when a deceased/artificially created body is infused with another living person's shadow. The shadow possesses it's own will, think Ryouma's body with Brook's shadow and how they fought, with the zombie disregarding Moriya completely for quite some time, as Brook is mentioned to have fought Ryouma/Shadow Brook for quite some time.

It's not uncommon for other shadows to be able to overpower Moriya's attempted control, or at the very least, where their basic instincts and impulses, ingrained into their very personalities is concerned. The Straw Hat crew zombies, like the pug Inuppe and the Jigoro constantly fighting, like their originals, Sanji and Zoro.

2
How was Robin able to stand despite being cuffed with Seastone?
2
Where did Nami get her Clima-tact while fighting Absalom?
7
How many characters in One Piece know what happened in the Void Century?
4
If the government wants to hide what happened during the void history why won't they just destroy the Poneglyph stone instead?
8
How did Brook know what his devil fruit was?
0
Void Century: how can a whole century go by without anyone knowing what happened?
3
How Shanks and his crew were able to survive a clash with Kaido pirates?
8
What devil fruits and their users that are able to fly?