When did people start putting anime characters on vehicles?

I occasionally see forum posts of people in Japan showing off their anime-styled cars and I saw some whilst in Japan also. I believe there's also groups of these people who have meetups and such. 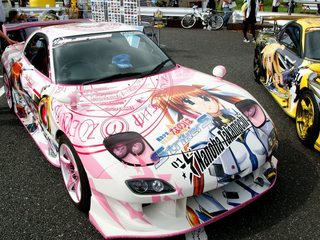 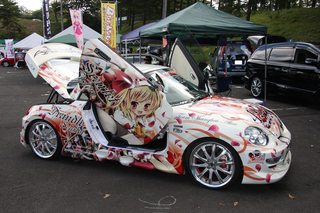 It's not just cars either, I've seen some boats and a few helicopters decorated too. 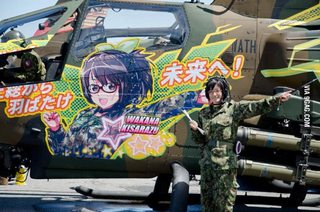 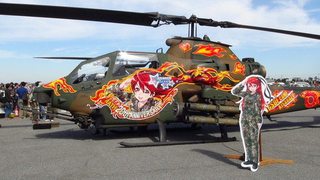 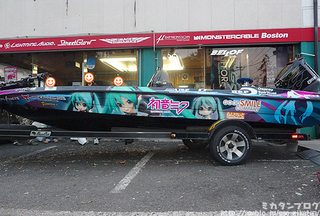 Obviously, these weren't around in the early days of anime - but when did they start appearing on the streets?

These type of otaku-owned car are called Itasha 痛車?, literally "painful car" (painfully embarrassing / painful for the wallet) and started with decoration of cars in the 80s when Japan experienced a lot of growth and many wealthy people started importing many luxury cars. This decoration only really consisted of plushies, stickers and non-permanent features.

According to Wikipedia, fully-fledged Itasha only really started being seen in the 21st century - when internet culture gave the anime industry a large growth sprurt - in advertising, greater fan communities and distribution.

Most often, stickers are put on the hood and doors of the car and then airbrushed. People who think, "It's kind of embarrassing, but I really want to ride in an itasha! ... But I'd have to hide it from my family and at my job. [..] can quickly take the design off by attaching and detaching magnetic stickers.

Although printing cutting sheets of personal favorite characters and putting them on the car is a popular method, people who are really devoted will commission a specialist to airbrush their designs.

This article mentions a few owners with itasha cars from 2002.

It's not a purely-japanese phenomenon either, there are itasha to be seen in Malaysia , Taiwan and the Philippines too. It hasn't become overly popular in the West just yet however.

Not the answer you're looking for? Browse other questions tagged culture itasha or ask your own question.

6
Why do sick anime characters often are said to have a "weak body"?
12
Has there been a study or documentary on the influence of Ani-song themes on Japan's music scene?
3
Why in World Trigger do the characters have times when their faces get blank during dialog?
6
Why are a lot of characters in anime and manga named after their mothers and not their fathers?
9
What is that "Oh yeah!" gesture that anime characters do called?
17
When did otaku become a derogatory term?
4
How did Japonism, if at all, affect manga/anime?