A commenter on the first article claims these 'rapes' are not as non-consensual as they seem:

This implies that the 'victim' enjoys the rough sex and is 'resisting' as part of the 'game', sort of like how tsundere pretend to hate the person they actually love.

Which leads to Not If They Enjoyed It Rationalization: which says:

In other words, the claim is that this, in some sense, doesn't count as rape because the purported victim enjoyed the experience.

Note: Some references have been excluded here for PG reasons.

There's a few layers to this question.

The main reason as some people have pointed out to you is that it sells. But let's go a little further into why that demand exists.

As you may know, Japan is suffering from increased sexless-ness and has one of the highest sexlessness rates in the world.

In 2005, Durex, the world’s largest condom maker, conducted a Global Sex Survey (see www.durex.com/en-jp/sexualwellbeingsurvey/documents/gss2005result.pdf) involving 317,000 respondents in 41 countries. The survey found that Japanese had the least sex in the world, at 45 times a year — far less than second-from-bottom Singapore (73 times a year), and even farther from the world average (103 times a year, meaning twice a week).

The reasons of this are many - although there is no agreed consensus on the exact causes. Some of these reasons likely include:

These cases are amplified by the application of surrounding businesses. Japan has a large sex industry sector - There are more than 12,000 sex-related businesses in Japan with big companies like Hitachi (devices) and many small companies too specializing in particular niches. Many of these are relevant to couple's engagements, but a significant portion of products are made for solo purchases. 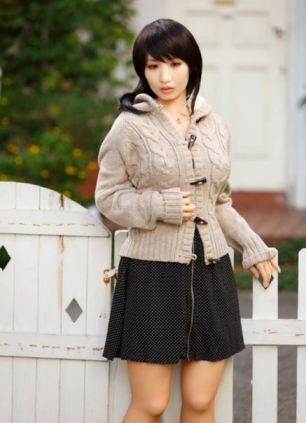 That's not to say that there isn't a large couple's market - in Japan there are many Love Hotels and S&M Clubs that you can visit with your partner.

On the mention of S&M, Non-standard sexual behaviour is not as taboo as it is in the West (especially America & the UK). Bondage for example is occasionally incorporated into fashion trends and there are many specialized shops for it around the country. There are many other specialized stores and services available for those who seek it. Famously, there are the infamous used underwear vending machines that have created many stories for Western newspapers.

You can also read the rest of my answer about Where the lolicon genre came from which covers that large area of fetishization.

And fetishization isn't a new thing, there are many lewd woodblock paintings from older Japan, such as Diver and Octopuses - a tentacle sex scene from 1 814.

So, non-consensual ( at first :| ) isn't particularly striking as a fetish when seen with all Japan has to offer (More.)

So from the above section we know that the Japanese have a large fetish scene anyway - and that sex rates aren't that high. But that doesn't specifically answer your question - so let's keep going. Bear with me!

Going back to Herbivore Men. These men range from actively shunning women (sometimes preferring 2D women) to being disinterested or resigned to their fate as a single man. 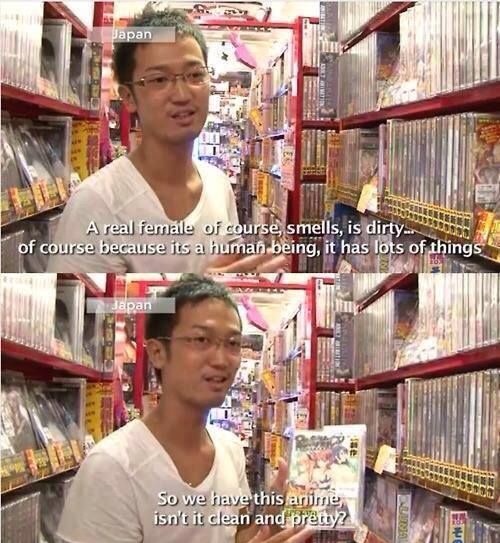 As of September 2010, 36% of Japanese men between the ages of 16 and 19 perceived themselves in this way. Additionally, two surveys of single men in their 20s and 30s found that 61% and 70%, respectively, considered themselves grass-eating men.

This scarcity of female interaction can often manifest as idolizing women - which can be seen in idol obsession and other aspects of japanese culture. The appeal of rape for herbivore watchers is then in attaining something that is not attainable normally - even if it is played out onscreen rather than in real life. This is a large reason motivation behind many real life rapes aswell. There's a certain unsavory culture in many areas that blame the victim for rape situations - somewhat empathizing with the rapist. These beliefs are also contributory rationale for some rapists. Raping unfortunately isn't always restricted to acted situations on TV however, and Japan has a significant amount of (mostly unreported) rape charges. Unwarranted sexual advances can be seen in the establishment of female only carriages on rail lines after many groping allegations.

And on a more hentai-specific note, I don't know if many people who would willingly do it with a sea monster. Why are tentacles prevalent in anime? is possibly of interest.

41
Why are tentacles prevalent in anime?
32
How did the lolicon genre begin in anime/manga?

9
Is there a tradition behind giving people names from English words?
7
Why are there so many “in Wonderland” episodes?
7
Has there recently been a trending popularity with scissors as weapons over swords?
3
Why go through so much trouble to show a character is staring by having her say or shout “stare”?
16
Why are there so many perverted virgins in anime?
4
Why do Japanese anime characters shout so much?
8
Why is there so much nudity in anime and manga?
4
Story-telling technique where the drawing style briefly gets much simpler?