Is this a Shonen Jump anime? [closed]

So I've had this image for a while (just been trying to find it to use in the question). 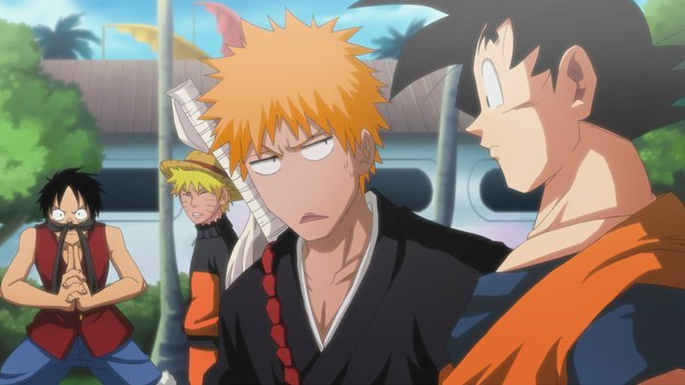 I know that all four characters are from Shonen Jump and looks (to me) like a screenshot of an actual anime, but when I try to use Google reverse image search I either get other image hosting sites tagging all the characters uploaded by various users or a YouTube AMV. (I am assuming as it is an AMV I don't have sound but the description links to a song called "Hear Me Now". Also I don't see the image in question in the video so I think it's used as a thumbnail).

So I am wondering is there a Shonen Jump anime which stars Luffy, Naruto, Ichigo and Goku?

The second page of a reverse image search leads me to this Deviant Art page, where it's made clear that this is fan art. (A lot of fan edits can look reasonably professional. For example, I know of someone on YouTube who includes a lot of scenes in her AMVs which she creates with Photoshop or the such. As an example, this Fullmetal Alchemist AMV features a number of with Hawkeye and Mustang that are non-canon, and which the creator states as such on her Tumblr blog.)

However, since it's still interesting to look at whether or not a cross-over exists, I'll take a look at that as well. It doesn't look like there's an anime starring all four, at least in that a search for any cross-over spin-offs doesn't generate anything "official". As I don't follow any of these series, this may have been insufficient.

For what it's worth, I searched for one piece spin-off dragon ball z naruto bleach. However, one piece spin-off dragon ball z did generate this one-chapter collaboration involving both series and Toriko, so it can't be that my search terms are completely off. Replacing spin-off with collaboration still yields no useful, official results. Moreover, when I put the names of the series in quotation marks, all I ended up with on the first couple pages were either references to the Toriko collaboration or people comparing all four series.

Not the answer you're looking for? Browse other questions tagged identification-request shonen-jump or ask your own question.

8
Are there other English versions of weekly manga magazines besides Shonen Jump?
6
What are the instances where a Weekly Shounen Jump serialized manga would not be released in a given week?
2
Was there an early preview of Kagamigami or a similar series in Shonen Jump?
3
How can I subscribe to Weekly Shonen Jump outside Japan?
0
Why is shonen manga's goriness these days abundant?