Which episodes of Sailor Moon Crystal are Ittou Asanuma in?

I believe that Ittou Asanuma's first appearance in Sailor Moon Crystal is in episode 15 when Makoto introduces him to Usagi and friends, that he does not appear in episode 16, and that his famous scene with Makoto from the manga is in episode 17. Is he in any other episodes, or did he only appear in those two 2 episodes? 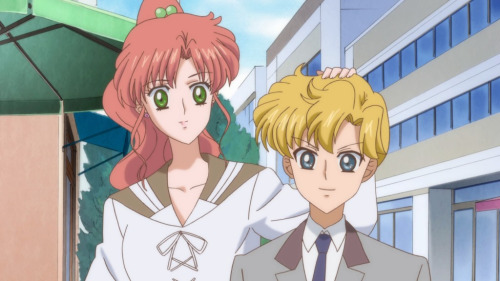 I do not recall Asanuma appearing in the first half of the show. It's of course possible he might have appeared earlier as a background object, similar to how the Curtis couple in Fullmetal Alchemist shows up in the background when Winry arrives in Central before they are formally introduced, but there are assuredly no explicit appearances up until episode 15. (If he did show up before then, it would be unsurprising for me -- as someone not that invested into Sailor Moon -- to have missed it, since I would not have known of Asanuma before episode 15.)

7
Were Luna and Artemis the only (sentient) cats in Sailor Moon?
4
How much of the original Sailor Moon anime isn't from the manga?
3
Why does Sailor Moon Crystal not air weekly?
2
Is there any in-universe reason why the Sailor Senshi aren't affected by the citywide energy drain?
2
Does Sailor Moon Crystal contain the Black Moon arc of the manga (Pluto and Chibiusa)?
3
Why didn't Chibi-usa initially recognize Sailors Mercury, Mars, Jupiter, & Venus as her friends?
4
After seeing Sailor Moon Crystal, will I miss anything by skipping the first two seasons of the original anime?
1
Why do the names of the Sankakusu sites match the surnames of Uranus, Neptune, and Pluto?
3
How was it possible for Sailor Moon to be referenced in Codename: Sailor V?