Which of the character quirks are based on real life, and which are purely fictional?

In the Kancolle anime (and presumably the game as well), several characters have little quirks that make them more memorable and unique. Some of these appear to be based on the factual history of the warships they resemble, but others I'm not so sure on.

For example, the character Kongou often uses English phrases sporadically in her sentences, and in her introduction to Fubuki she mentions she was "born in England [and] raised in Japan". The real life battleship that was the first of the Kongou class was indeed originally constructed in England, which makes me believe that the quirks of this character are a reference to the history of the warship.

So, which of the following are jokes based on fact, and which are simply made up, or carried over from the browser game?

I've tried to include links to evidence for most of them. If I've missed any major historical references made in the anime, please mention those in an answer as well.

This is all I've been able to find:

According to the Kancolle Wikia and a few other sources, ~poi can roughly be translated as 'supposedly', 'seems like', 'perhaps' - all words of uncertainty.

The main reason behind Yuudachi's speech pattern is because no one actually had a clear record of what she actually accomplished in the Guadalcanal Campaign.

It was technically a huge mess during the fight and no one actually knew what was happening. Even though Yuudachi did wreak havoc in the battle, there are other ships who also claimed the kills.

Since her battle records were unclear and involved a lot of guess work from naval historians from both sides after the war, the game version of Yuudachi landed with the "poi" catchphrase just to reflect that little piece of history. (You can see from her introduction line that she wasn't so sure of her battle result in Guadalcanal either.)

The Guadalcanal Campaign was fought between 7 August 1942 and 9 February 1943 in and around the island of Guadalcanal in World War II. It was the first major offensive by Allied forces against the Empire of Japan.

The Yuudachi was disabled on the night of 12-13 of November, 1942 and the crew made some makeshift sails out of white hammocks. This was mistaken by the Americans to be a flag of surrender causing much confusion as they were still fighting back.

It seems that the Yuudachi is surrounded with a lot of confusion and vagueness which I image is what poi is referring to. 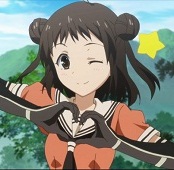 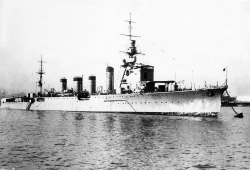 I can't see anything related to idol culture in Naka's history, but it did go through a repetitive change in leadership and was at the Battle of the Java Sea which had the most amount of ships taking part in battle since 1916.

So possibly there's been some parallels drawn between that and the larger idol groups like AKB48. (She does reference the group in some of her game lines) 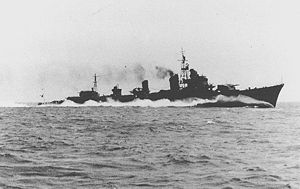 There are two Japanese destroyer Shimakazes, the one built in 1942 was enormously powerful and one of the fastest destroyers in the world: her designed speed was 39 knots (72 km/h; 45 mph), but on trials she made 40.9 knots (75.7 km/h; 47.1 mph). The 1920 ships were also record-breakingly fast for their time.

The ship does have 3 powerful twin-turrets. I'm not sure why they are separated from her body though. They did seem to be very powerful - perhaps the original designer thought they deserved their own characters. 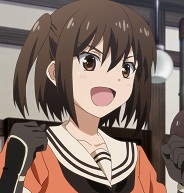 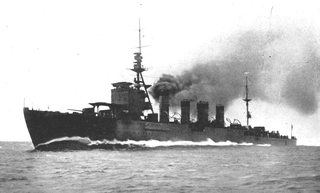 There's not much information about the Sendai light cruiser, but its most famous naval battle was when it attacked Malaya as part of the Second Sino-Japanese War (according to Imperial Japanese Navy Light Cruisers 1941-45, Mark Stille) at 23:45 on 7th December 1941 under the cover of darkness. Presumably, that's why she loves night battles. 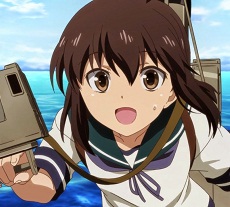 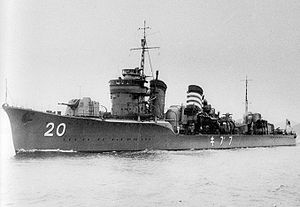 Again, not much relevant information here. However, there were some accusations that the Fubuki destroyer accidentally sunk a Japanese minesweeper and four transports - perhaps as an anime girl that makes her clumsy? (It is now thought that the ship Mogami was the culprit) [Mark Stille again] 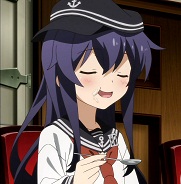 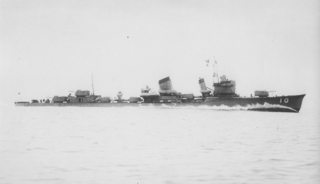 I couldn't find anything that was lady-like about this ship. 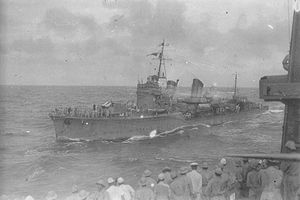 Her tendency to include Russian words in her speech (not just "khorosho", as seen in the game) is a reference to the fact that she was turned over to the Soviet Union as a prize of war in 1947, and placed in service with the Soviet Navy under the name Verniy (Russian: Верный "Faithful"). She was renamed again in 1948 as Dekabrist (Russian: Декабрист "Decembrist"). She was retired from service in 1953.

In the game, on her second remodel (Kai Ni), her name is changed to Верный/Verniy, and her hat is changed to a white hat with a star and hammer-and-sickle symbol, which are references to the Soviet Flag. 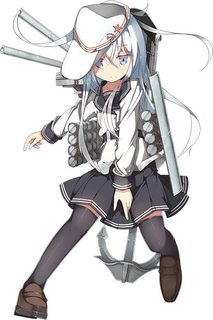 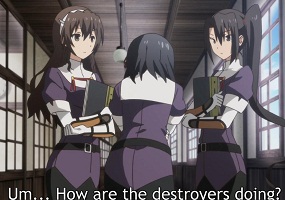 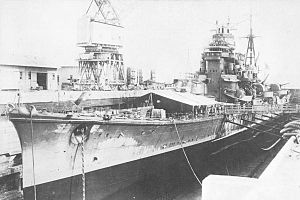 Again, I think this is a seniority thing, Ashigara was one of the very first 10,000 Tonne ships produced by any nation, according to All the World’s Fighting Ships 1902-1920. The Myoko cruisers were also built fairly early.

Another question asking about seniority in Kancolle: Do seniority relations among the fleet girls have any basis in properties of the actual ships? 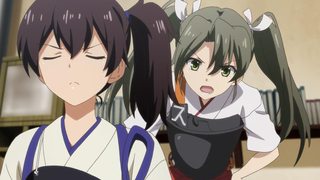 While the reason for the dislike isn't mentioned explicitly, on the Kancolle wiki page for Kaga, this excerpt can be found under Quotes > 'Battle start':

Historical note: By "kids" she refers to their air wings rather than the 5th Division's ships themselves; historically 1st Carrier Div's crew looked down upon 5th Div's (Shoukaku and Zuikaku) as they were newly grouped during the early stage of WW2. 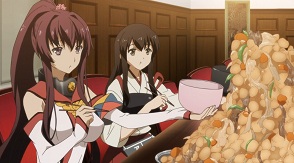 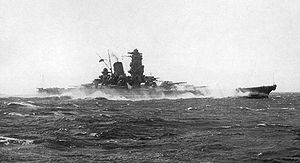 I couldn't find anything related to Akagi huge appetite but as Sakurai Tomoko mentioned on comment Yamato were the heaviest and most powerfully armed battleships ever constructed and she has a high fuel consumption which explain her huge appetite.

It is mentioned on wiki, Yamato was once dubbed "Hotel Yamato" by the Japanese cruiser and destroyer crews. The battleship spent only a single day away from Truk between her arrival in August 1942 and her departure on 8 May 1943.

She remained here (Truk) throughout the Guadalcanal Campaign because of a lack of 460 mm ammunition suitable for shore bombardment, uncharted seas around Guadalcanal, and her high fuel consumption

Mamiya is often seen to runs a cafe in the naval district. In real life, Mamiya was a food supply ship of the Imperial Japanese Navy and was in service from 1920s-1940s. 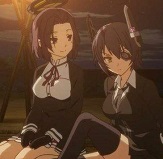 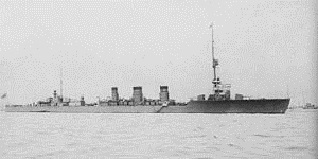 Known for using a melee weapon, both Tenryuu and Tatsuta are unique compared with other kanmusu who mostly only use their guns (with an exception for aircraft carrier). In real life, both ship were renovated with a modified bow superstructure, replacing the canvas sides of the bridge with steel plate. The bridge was then further reinforced with steel plate as protection against shrapnel.

Their weapon also look similar to their bow: 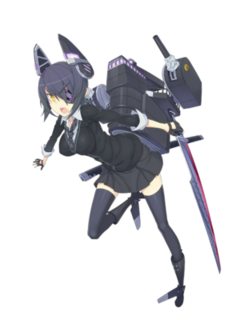 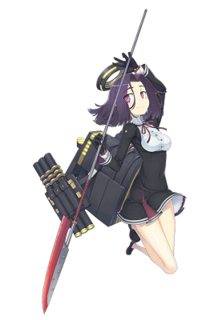 Akagi's rather large appetite comes from the game. In the early stages of the game there was a bug that caused her to consume an obscene amount of resources when resupplying

Not the answer you're looking for? Browse other questions tagged kantai-collection or ask your own question.

5
Do seniority relations among the fleet girls have any basis in properties of the actual ships?