Can you manipulate a person using an alias with the death note?

So. Let's say John has a death note. Now there's a killer on the run, and John doesn't know his name and face. Now he writes the name of a criminal in his death note, to indirectly catch the killer. He writes:

Bob Zorto gets stabbed to death, at 12:30, by the serial killer, who uses the alias ''Shadow Killer''.

Could that actually work?

No, this would not work.

In chapter 45 page 17, we see how L tells us that nicknames would not work and the cause of death would turn into an heart attack. The exact quote for reference was:

It is not possible to have "Make Amane Misa talk about L and then kill her", and it would turn into a heart attack since "L" is a nickname. 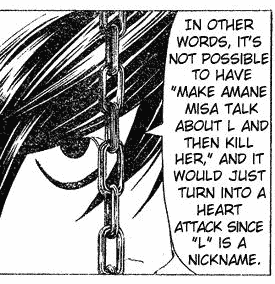 11
How far can you manipulate someone with a Death Note?
12
Will a person die when their name is written in the situation of death?
2
If a Death Note user specifies, along with the actual target, the name of a person whose face the user doesn't know, will that person live?

2
Another question about the 23 day rule
0
Would it be possible to indirectly kill people?
9
Is someone who wrote his name in the Death Note allowed to make the eye deal?
8
How long can you manipulate a person with a Death Note?
3
Can a person do the shinigami eye deal without losing half of his lifespan?
8
Can the Death Note manipulate people whose names aren't written in it?