Who is the "dinosaur guy with the nasty attitude"?

It has been a while, so I can't seem to remember, but who is Beerus referring to, when he is talking about "that dinosaur guy with the nasty attitude" that he asked to destroy Earth? 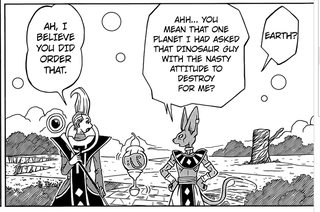 Also, note how Beerus says he asked "the dinosaur guy with the nasty attitude" to destroy Earth. In "Battle of Gods" Beerus says this a little differently--he says he is the one who destroyed all the dinosaurs on Earth. This could be an error in translation, or it could be Toyotaro changing it up, since we all know dinosaurs are still alive and well on planet Earth in Dragon Ball (I explain how that is at the bottom of my "Battle of Gods" post). Maybe this "dinosaur guy" is someone we'll meet eventually? Maybe it's a reference to King Piccolo or Babadi? Or maybe it's just an off-handed joke to a Godzilla-like kaiju that'll never be followed up on.

It could well be a translation error as Dragon Ball Wikia confirms what Beerus said in Battle of the Gods:

Beerus also claims that he once went to Earth, and dinosaurs took a rude attitude toward him, so he wiped them out.

This could be revealed in the future or be kept as a mystery element. Only Akira sensei knows how its going to be.

I think it's Azala from Chrono Trigger http://chrono.wikia.com/wiki/Azala I think Beerus make a few other Chrono Trigger jokes like he destroyed the time ship Epoch. That's why I think he's talking about Azala the dinosaur guy with a rude disposition.

6
Dragon Ball Super release date
7
Why is Zamasu alive in the future when he was killed by Lord Beerus in Dragon Ball Super?
0
Can any other saiyan attain Super Saiyan Rage?
2
Are the manga and the anime portraying Beerus as having the same strenght compared to other gods?
10
How many times Vegeta has surpassed Goku in power?
0
Is it proven Gogeta is stronger than Beerus?
2
What song is playing in DBS episode 130 at 4:22? (UI Goku vs Jiren)