Is the heart a weak point of a Logia user?

That Monet could be killed By Caesar Clown by stabbing its heart looks a bit awkward to me.

I mean, when Monet was cut by Zoro she didn't look to be prepared to properly activate its logia power to receive the cut and she still was able to survive and regenerate, so it's safe to assume that he can instinctively react, or that even if she got damage on her brain, she was still able to avoid it by converting into it's logia element, and it's sure worse to have your brain splitted in two than having your heart stabbed.

Maybe Law's powers made her unable to use her logia powers, but it's clear that any cut part that is under Law's power still can react to its owners will as shown with Kinemon's legs.

Then maybe it's that Logia users cannot convert their heart to their logia element, so that would be a weak point they have.

I'm asking about the possibility of logia users not being able to convert their heart into their element, so it would be another weak point they would have apart from being attacked with haki. I mean, they could also be killed, for example, by stabbing them with a sword where their heart would be, no need of haki to do that. I'm giving those facts as a support for this possibility, so I'd like your opinion if that's really a fact, a possibility, or there's something that makes the possibility I'm telling impossible.

Concerning Monet, she was too terrified by Zoro's killing intent to properly defend herself. When she was cut, you could see her struggling to move in an attempt to put herself back together. She can't and is shivering with a scared and confused expression on her face. Logia powers activate on a mental level, much like Paramecia and Zoan, however Logias rely on their subconscious to activate the power in the even of danger. It's why they can still touch things, when not using it. There are cases when a human can be paralyzed with fear, as was the case of Monet. 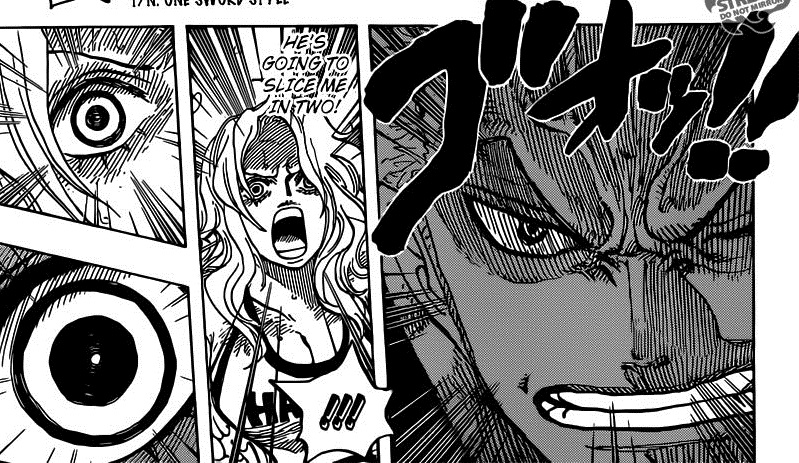 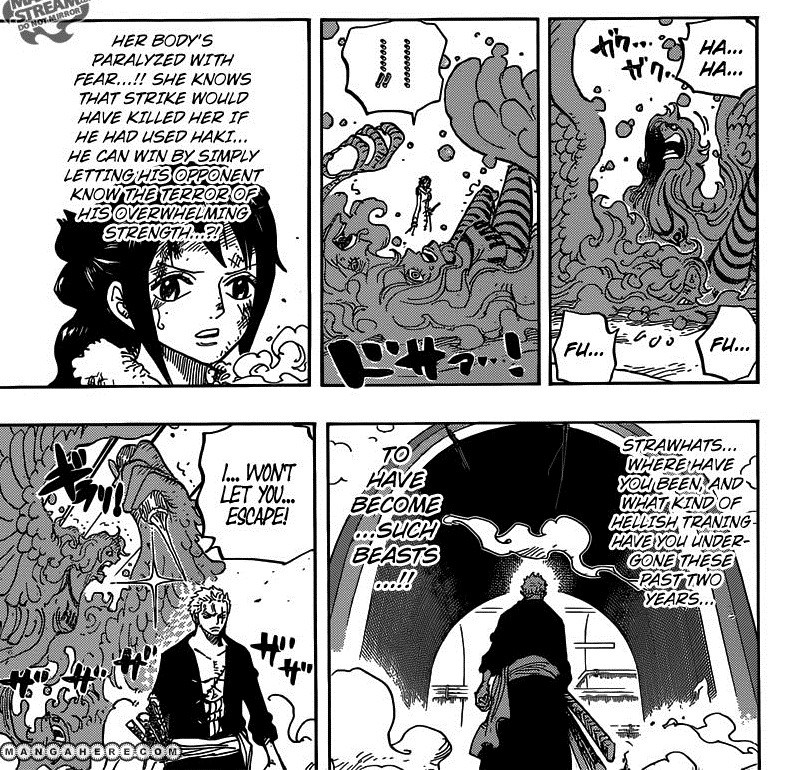 Now, for Law, that's actually pretty simple. Law's power creates a field into which he can manipulate all matter as he pleases. So while inside the field, Law had separated the hearts from the user and enclosed them in their own space. It's why they seem to be frozen in ice, which is how the effect is shown.

Monet did use her logia to survive; she saw the blade and reacted. Zoro explicitly did not use Haki which is why she could survive this. The don't show much of her logia change to give the momentary impression that he used Haki and killed her.

When Ceasar stabbed her heart, she could not have sensed the blade until it penetrated. For other characters, they might have noticed via Observation Haki.

While it is possible to imagine the logia users cleverly hid their hearts when using their powers, at this point no evidence supports this. At least three pieces of evidence weakly contradict it. Light normally wouldn't be able to carry something with mass with it (but this barely behaves like light). Anything logia like fire, lava, ice, etc. would have to give the heart immunity to the element so they could not just have a normal human heart. Lastly, several Paramecia (I know not logia) users strongly imply that their hearts are effected by the devil fruit. This shows that if there were something to do with logia hearts it would be restricted to logia users (which seems unlikely).

0
What class of Devil Fruit does the Gomu Gomu no Mi come under?
4
Are Devil Fruit users weak to salt?
3
How do Logia powers work?
2
What skills introduced prior to the formal introduction of Haki are Busoshoku Haki based?
2
What type of Logia can defeat a Haki user?
3
Are Logia types overpowered?
3
Did Ace master any Haki abilities?
2
Crocodile Logia Defense Explanation
1
How do some logia users fly?
0
If Logia devil fruit can produce an infinite amount of their element, how fast is it generated?