Was it really necessary to take such precautions to confine Misa

They rendered Misa completely immobile and blindfolded her and kept her like this for 40 days. Physically, she wasn't a threat to anyone and she couldn’t have possibly broken out of the cell. Even if she could kill with only a face, they could have worn masks to cover their faces whenever they interacted with her in person. I just think It is a little inhume to have someone strapped down for 24 hours a day, for 6 weeks, whislt blindfolded at the same time, espically when it was completely uncessary to take such measures.

They did not know it was unnecessary. At that point in time they did not know how she was able to kill. She might have been able to kill by mere touch for all they knew. So to be safe, they confined her. This does not look too inhumane and standard practise to me, considering the situation. Keep in mind that despite her being a cute idol, she was also a serial killer and had murdered their companion Ukita. L was not going to take any chances losing another human life. 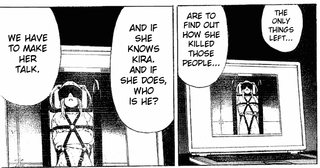 After reading chapter 33 again, it seems like L himself never really explained why he confined her this way, other than

She's suspected of being the second Killer, so it's only logical to restrain her this way. 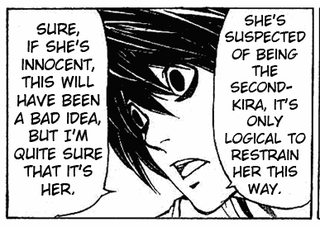 21
Couldn't Misa have told Kira L's life span?
22
What happened to Misa Amane in the last episode?
5
What was the intent for making Rem sacrifice herself for Misa?
20
Is Misa Amane's early death a plothole in Death Note?
10
Why didn't the Task Force capture Misa Amane?
5
Why didn't anyone question how Misa Misa killed Kaneboshi?
10
Was Misa accessible to Light in the finale in the way that this proposition assumes?
1
Was L suspicious of all Light's girlfriends or only Misa?
4
Why didn’t Rem die when she killed the criminal to save misa when she was in higuchi’s car?
1
Would Misa get back her Shinigami Eyes?