On the ANN article announcing Love Live's TV series, they report the following: (emphasis is my own)

The anime studio Sunrise, the music label Lantis, and ASCII Media Works' Dengeki G Magazine developed Love Live! School idol project as a self-described "ultimate user-participation project" which lets its fans vote on the future of the fictional idol characters. Online mobile phone polls have determined different aspects of the idols, such as hairstyles and costumes.

Obviously the article says "hairstyles and costumes" but I assume that's just two of the things voted on.

A perfect answer would contain screenshots of all of the polls, but if all you can find is the winning results (character X should wear twintails, character Y should be shy, character Z should be the main character, etc.) then that would be much appreciated too.

The polls seem to decide quite a bit of the series, sans plot. Unfortunately, not all of them were broadcast well (at least, in English or otherwise easily found). As you mentioned, characters' hairstyles, costumes, and appearance were voted upon. I was unable to find these specific polls and their results. In particular, it does not appear that the actual poll pages are available anymore.

In addition to the character attributes, though, names of the group and the mini units were decided through polls, and there are frequent (and still ongoing) popularity polls. Some polls are used to determine character order in media such as music videos.

Dengeki G's magazine is the medium through which (most of) the polls are hosted. They, and their results, were printed in the various issues of the magazine, and conducted through their mobile site.

(Note: All magazines are published two months in the future. Here, I've used the actual month of publication, rather than the "issue date".)

The first through fourth popularity polls ran as follows:

The naming polls were early in the publications, following the first popularity vote:

The popularity votes (or "general elections") were polls done for all the heroines of the show and were done by mobile phone site via Dengeki G's mobile site. I could not find the issue date for the 5th popularity vote, but it is ongoing at Love Live!'s official website, and will decide the central character of the 6th single music video.

Here is small publication of one of the results: 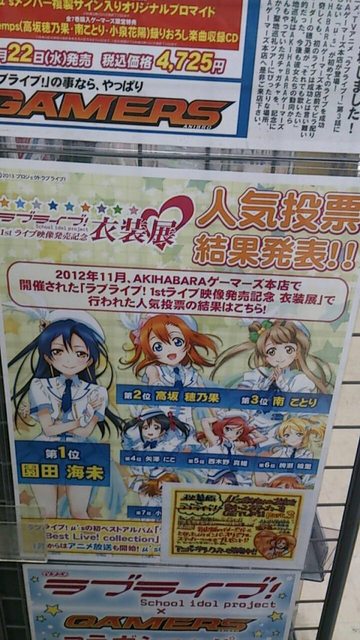 As for the rest of the polls' results, most of them can be found on the Japanese Wikipedia for μ's and Aquors (screenshot here; they do not appear to be readily available anywhere in English).

3
In Love Live episode 6, what were the results of each member in karaoke/dance?
2
Who/what is Gamers and what is their connection to the Love Live series?
5
What Idol Groups in Love Live have real life counterparts?