How did Araragi hide yoto “Kokoro-Watari” inside his body?

In the Nekomonogatari-Black anime, yōtō "Kokoro-Watari" (妖刀「心渡」, sometimes translated as demon sword "Heartspan") is shown with different lengths, but it always appears to be bigger than Araragi. The size changing isn't very noticeable unless you are actively checking, so it could just be due to animator laziness, but the fact that it is longer than Araragi is seems deliberate as it is drawn that way consistently in every scene.

Here is one screenshot of the sword, compared to Araragi. Both red lines are the same length. 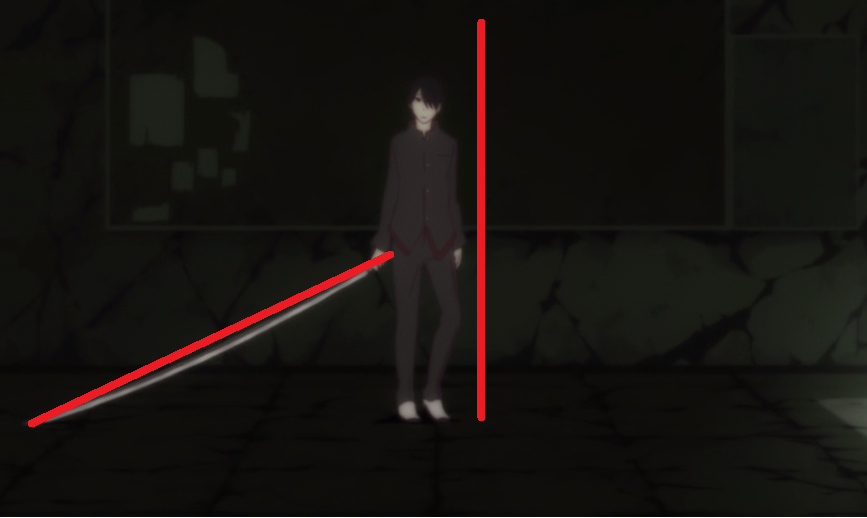 Even if he is leaning over in the picture, it's pretty clear that the sword is bigger than he is. It's also clear when he gets cut in half: 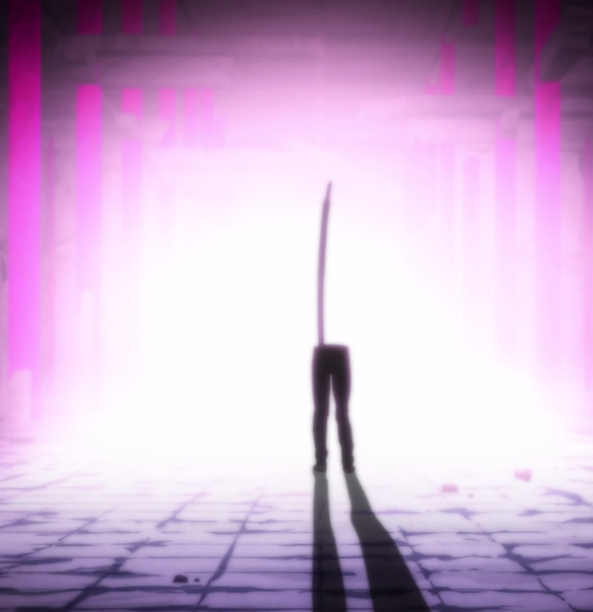 However, despite the fact that the sword is taller than he is, it fits into his body. It even fits in Shinobu's body, though of course that could just be one of her abilities. But to the best of my knowledge Araragi should not have any such ability. In addition, the sword is stuck in the ground after his legs disintegrate, which also should not be possible if it was inside of him.

This could very well just be SHAFT following their usual style with the Monogatari novel adaptations, where the visuals aren't meant to be taken literally. Or it could be an indication of another ability of the sword. Is there any evidence that yōtō "Kokoro-Watari" has some ability that would allow it to fit inside Araragi's body (e.g. changing size)?

As someone who read Kizumonogatari (translated by Baka-Tsuki, not in original Japanese) I thought that I might shed some light about the sword.

First off, I would like to mention that although Kizumonogatari does have a whole bunch of interesting facts about the series (most of which are based around Shinobu and Koyomi's relationship) there is actually surprisingly little about the sword (I actually found this thread by googleing the sword).

I'll try to refrain from spoiling and just say you learn where the sword is from and how it only cuts Kaiis (or Aberrations/Monsters) but we are not told that it has any other special properties from a sword otherwise, so while mcs may have the correct answer, I believe it actually lies elsewhere.

First off I will answer why the sword is able to fit inside Shinobu. Contradictory to Koyomi, Shinobu doesn't actually stick the sword inside herself. Vampires actually have the ability to materialize objects/possessions at will, and Shinobu "conjures" up the sword each time she wishes to wield it. Koyomi never reached that "power level" so he was never able to materialize anything, but to Kissshot-Acerolaorion-Heartunderblade it was no big deal. As for why she materializes it from her mouth, I have no idea (but hey, it sure looks cool).

For Koyomi, I think you actually answered your own question. Indeed the sword is longer than him, I think in the novel it was said to be around 2 meters (~6.6 feet) long. However as you so keenly noticed, the sword was stuck in the ground. During his conversation with Hanakawa, Koyomi never moved from his original spot and if you notice his standing posture is a little strange (he seems to be focusing all his weight on his left foot). I think this is just because he stuck the sword (through him) straight into the ground and couldn't move from that axis.

This is just what I thought from re-watching the scene and from reading the light novels. I hope you found my information useful.

This is just an on-the-spot theory since I haven't read the novels, but 刃渡り means the length of a blade. Notice it shares 刃 with 忍 and 渡 with 心渡, while 心渡 and 忍 share 心, completing the trifecta.

Thus I think it's safe to assume that the length of the 心渡 is a crucial part of its design. (perhaps "heart-length" would be the most appropriate translation)

From this you could derive any number of theories and many of them would be appropriate. The simplest would be that it changes length depending on the will, emotions, or state of mind of the user (all three have close ties to 心).

While Shinobu is heart-under-blade, the sword's true usage might be heart over blade, i.e. mind over matter, controlling it with your will.

Someone who's actually read Kizumonogatari might be able to give a definite answer.

This post is old but since it hasn't been answered yet: In the novel, Araragi explains that he swallows the sword and stabs it down through one of his legs until it is burried past his throat and all the way through the floor (As a little nod to that, you can notice that though his posture shifts, he never moves one of his feet).

The ability of kokorowatari as explained in the novel is that it can perfectly cut through anything, oddity or object. Oddities are hurt by this cut but physical objects and living thins are so seamlessly cut that they join back together at the incision and receive no damage; so that's why Araragi could easily push through his flesh and the concrete floor.

In the anime it was really only drawn to it's full length as an artistic liberty to be more visually impressive. Heck, for that matter when Shinobu rips out her arm to restore Araragi with her blood, Araragi explains that his bottom half rematerializes but the pants are left behind and they didn't draw him half naked.

In Kizumonogatari, Kissshot explains that the Heartspan is not the original sword, but a copy made of vampire blood (the blood of Kissshot's first servant). That by itself is enough to explain why Shinobu and Araragi, being part vampires, can manipulate it in that way. When the sword enters their bodies, it melts into blood again. The sword is special in this case, not them.

7
How did Shinobu know where Araragi is when he was attacked by Tsubasa?
2
How did Araragi become tolerant to the sun?
3
How did Araragi Koyomi lose his vampire powers in the Monogatari Series?