Why is Super Sonico famous?

The first thing that comes to mind when you think of Super Sonico is probably her large * ahem * assets. 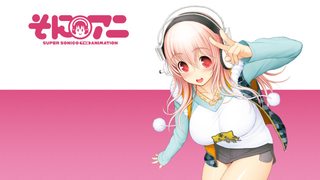 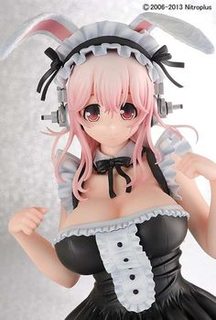 Super sonico is all over the internet and has many fan-service wallpapers, figures, etc.

What is Super Sonico actually famous for?

I know she's a mascot for a gaming company, but is it purely the appeal of her chest that has gained her the massive fan following?

I did a little more research after writing my initial comment, though it was pretty hard to find good information on this topic in English. What I present below is my own theory, compiled from my own interpretation of the evidence.

Super Sonico isn't the mascot of just any gaming company; she's the mascot of Nitroplus, the visual novel cooperative which gave Gen Urobuchi his break into the visual novel world in 2000 when he wrote the scenario for their first game, Phantom of Inferno.1 Urobuchi later went on to work on the Fate/Zero novels and anime, and to become one of the Magica Quartet group that created Puella Magi Madoka Magica. Nitroplus was also involved in the creation of the Science Adventure visual novels, Chaos;Head, Steins;Gate, and Robotics;Notes, alongside another company called 5pb. These are hugely popular works among otaku, and their rise seems to have triggered the rise of Super Sonico by association.

Various sources, including TV Tropes, give me the impression that Nitroplus's breakthrough work was 2003's Saya no Uta, another Urobuchi project. In 2004, Urobuchi was invited by Kinoko Nasu to coauthor the Fate/Zero light novels, which were released in 2006 and 2007 according to Madoka Wiki. In 2011, Urobuchi worked on the Fate/Zero anime and also became part of Magica Quartet and developed the story for Puella Magi Madoka Magica. By 2012, Urobuchi was likely a household name among otaku due to his involvement in these massive hits. His involvement with Nitroplus probably caused a massive boost in popularity for their work. Also, the Chaos;Head/Steins;Gate/Robotics;Notes series began in 2008 with the initial release of Chaos;Head, and seems to have been fairly popular—it's certainly had enough manga and anime adaptations that it can't have been a total failure, though I'm not familiar with the series myself. All of this means that Nitroplus was just starting to hit the scene in a big way around 2011. This was the year Urobuchi took off, and also the year that the Steins;Gate anime came out. (There had previously been a Chaos;Head anime.)

The manga and visual novel seem to have been the start of a massive marketing blitz by Nitroplus to get Super Sonico on as many screens as possible. 2014 saw Super Sonico: The Animation, which likely introduced the character to Western audiences when it ran on Crunchyroll. There was also a second Super Sonico game, this time for 3DS, in 2014. Super Sonico made cameo appearances in tons of other games and is slated to appear in even more.

So the chain of events suggests that Super Sonico became famous at the same time that Nitroplus did, and that since then, Nitroplus has intentionally put effort into maintaining her popularity by releasing tie-in merchandise and getting her cameos in other media. It makes sense from Nitroplus's perspective to spend money on this: otaku are known to become enamored of mascot-type characters (the Digi Carat gang, Hatsune Miku, Kantai Collection, Touhou, Miss Monochrome) and spend money on games, albums, toys, phone cards, pencil boards, dakimakura covers, and manga spinoffs featuring the characters, so Super Sonico is a direct revenue source for the company. But as the company's mascot, Super Sonico also increases Nitroplus's profile in a way that even a superstar like Urobuchi can't do. She's like Nitroplus's equivalent to the McDonald's golden arches, or the Disney Mickey Mouse head. Every Super Sonico dakimakura cover, every Super Sonico doujinshi, every piece of Super Sonico fanart, is an advertisement for Nitroplus. Every person who stumbles on a Super Sonico doujinshi without knowing the character, and decides to look into her origin, is another potential buyer for Nitroplus's products—not just the Super Sonico products, but also their other products like Saya no Uta and Chaos;Head. I suspect that her popularity is going to wane soon, now that she's advertising train stations and beer. However, for now, she seems to be an important part of Nitroplus's marketing strategy.

(Now we just need the Super Sonico vs. Miss Monochrome Battle of the Mascots rhythm game/manga/anime/visual novel, continuing the epic battle between big boobs and average boobs which has played out across countless anime.)

1: The Madoka wiki article on Urobuchi claims Phantom of Inferno came out in 2001, but Wikipedia and TV Tropes agree on 2000 (February 25th, 2000 according to Wikipedia).

Not the answer you're looking for? Browse other questions tagged super-sonico or ask your own question.