What are the real-life origins of CPU and CPU Candidates?

In Hyperdimension Neptunia, Neptunia is based on Sega Neptune. The name of her country, Planeptune is obviously a reference to Sega Neptune. My question is, what console the other CPU and CPU Candidates (Nepgear, Noire, Uni, and Vert) are based on?

Noire means black and her country is Lastation which is based on Sony Playstation. But, PS2, PS3, and PS4 all has black color. PSX/PSOne is excluded since it's gray. Which Playstation console is she based on?

The same can be said about Vert, which means green. There are several variations of XBox. Which one is she based on?

And what about Nepgear and Uni?

EDIT: Considering that Blanc's sister are Rom and Ram, which is obviously a reference to ROM (Read-Only Memory) and RAM (Random Access Memory), it might be possible that Nepgear and Uni refers to a certain peripheral/component/parts of the console. But still, what part?

Nepgear is based on the Sega Game Gear, its reference being that Neptune wears two hairclips while Nepgear only has one, possibly representing the maximum number of D-pads supported by the respective consoles the two are based on. (The Sega Neptune is equipped with two controller ports, while the Sega Game Gear requires a link cable to play with more than one player.)

Uni is based on the PlayStation Portable, probably with her name derived from the PSP's optimal disc, the Universal Media Disc.

Vert and Leanbox references the Xbox and Xbox 360, but there is no concrete hint to which they are. Although, in the first game, Vert was said to have a problem with getting too hot; this may reference the 360's tendency to overheat. The Green Heart's outfit is revealing, preferably to easier vent heat.

Ram and Rom are both based on the Nintendo DS. As they are twins, they could resemble the DS' dual screen. The rectangles on their hats in their default outfit seems to represent the screen icons from the DS logo.

Each game in the Hyperdimension Neptunia series is different. They have different stories and different origins. As an example, in Re;Birth 1, the remake of the first game, the goddesses were fighting against each other in the start of the story. In Re;Birth 2, they were already friends in the beginning and Arfoire is technically dead.

With that in mind, when the first game was conceived, the latest consoles are the PS3, the Wii, and the Xbox 360. Noire, Blanc, and Vert's CPU forms represents these consoles respectively. The color scheme for Noire and the PS3 is black. For Blanc, it's white and blue just like the Wii. For Vert, it's green and white, just like the Xbox 360.

By the time the second game (Hyperdimension Neptunia MK2) comes out, the PSP and the Nintendo DS are already released. Ram and Rom represents the dual screen that the DS has and Uni represents the PSP. You can see how the front of Uni's dress matches the UMD holder of the PSP. Her color is also black, which matches the piano black color scheme of the PSP.

Although the goddesses represents the entire console line, their style changes with each generation as each game are different. With Victory 2, because the new Xbox One is the latest Xbox console, Vert's color theme changes to include black. Noire's color theme also includes blue due to the bluish color that the PS4 have. 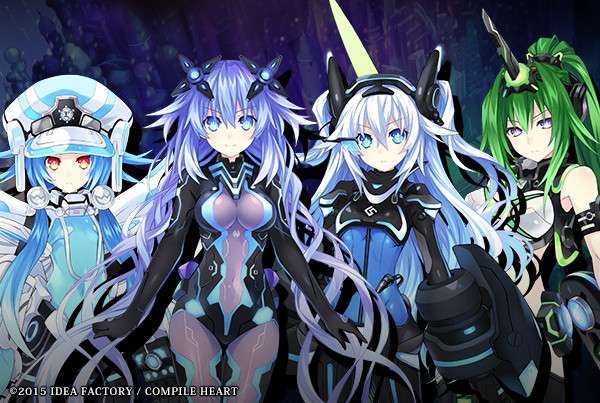 Noire's, Vert's and Blanc's console representations in the Ultradimension of Hyperdimension Neptunia V are a bit looser as the Ultradimension represents 1989 and to my knowledge out of the 3 only Nintendo had a console back then for Blanc to fall back to while Noire and Vert do not (Vert questionably could be PC)

which may also be why CFW.Trick and Linda converted Rom to their side rather than Ram during the Lowee chapters of Mk. II

1: both the DS and DSi were released in japan before the Japanese Release of Hyperdimension Neptunia Mk II. the games released for both DS consoles are labeled as DS and work on both systems (as opposed to 3DS or NN3DS games) however the DSi contained a redeveloped operating system and the reintroduction of Region Locking (not present in the original DS) making different operationally wise much like how Ram and Rom are different personality wise

2: as stated on the Wikia's Trivia for Eden there is a reference to Hudson Soft logo which also fits Peashy's color scheme however while Hudson Soft never released any consoles they did make the Hudson Soft HuC6280 CPU for the TurboGraphx 16

3: as you can see on Wikipedia the Acronym is DoS (with a lowercase o) while Disk Operating System it's DOS (with a Capital O) and the of the in the term Criminal of the Free World is omitted in the acronym CFW as such i would more side with DOS rather than DoS however i have no proper citation for which term was used in the English translation

The Neptune and Nepgear they are named after are fictional seventh gen devices. They can be seen in the media related to the games and occasionally in the games themselves.

Because she's not based on an existing line of consoles, ingame lore states that Neptune's CPU is upgradeable. I'm not sure if this is the case with Nepgear though...

Not the answer you're looking for? Browse other questions tagged hyperdimension-neptunia .

10
What was the terrible artwork on the flyer in episode 1?
6
Is there any correlation between the CPU and CPU candidates' oppai sizes like there is with KanColle?
2
In what order do the Hyperdimension Neptunia games go (including the animation)?
1
What is the connection between Cave being nimble and nothing being able to touch her "hitbox"?