User /u/JekoJeko5 has recently posted on /r/anime his observation that the term "forced drama" is almost exclusively used in discussions of anime. It is difficult to give a concrete description of what "forced drama" is, but many users in the linked thread have offered their opinions on the matter. The one that seems most "correct" (or at least, most pithy) to me is this one by /u/OverKillv7:

Forced drama is every idolmaster-like show that has the stupid sprain-the-ankle-before-the-big-show thing... every time for no reason other than they need something to happen.

In retrospect (now that the topic has been brought up), I do notice that the term really isn't used in non-anime circles. I find it interesting that the English-speaking anime community has developed this term, presumably to describe a particular kind of frustrating storytelling that is common in anime.

What I would like to know is this: how did the term originate and gain cachet in discussions of anime? (Basically, I'm looking for something analogous to my earlier answers about "waifu" and "best girl".)

As with many internet neologisms, I suspect this one originated on 4chan, though I'm not sure whether we can pin this on /a/ specifically. Snowclones of the term are reasonably popular on 4chan; for example, "forced fun" on /v/ and "forced animation" on /a/ (both of these examples are mostly used parodically). The /a/ archiver returns results going all the way back to February 2008, when archival began, which gives us an upper bound on how late the term could have been coined. I'm not sure how to proceed for getting to the root of "forced drama", though - and that's where you come in, dear answerers.

Unfortunately, my research skills weren't up to the task of finding out how the term "forced drama" first appeared in the anime fandom, so all I can is speculate. I hope that someone else can contribute an answer which sheds more light on that particular aspect of the question. However, I did find some interesting information on the origins of the term, which can be found long ago and outside of anime. It seems that this phrase was actually in use among film, theater, and art critics before anime or 4chan, although it wasn't particularly common.

Here's a screenshot of Google N-Gram viewer for the phrase "forced drama": 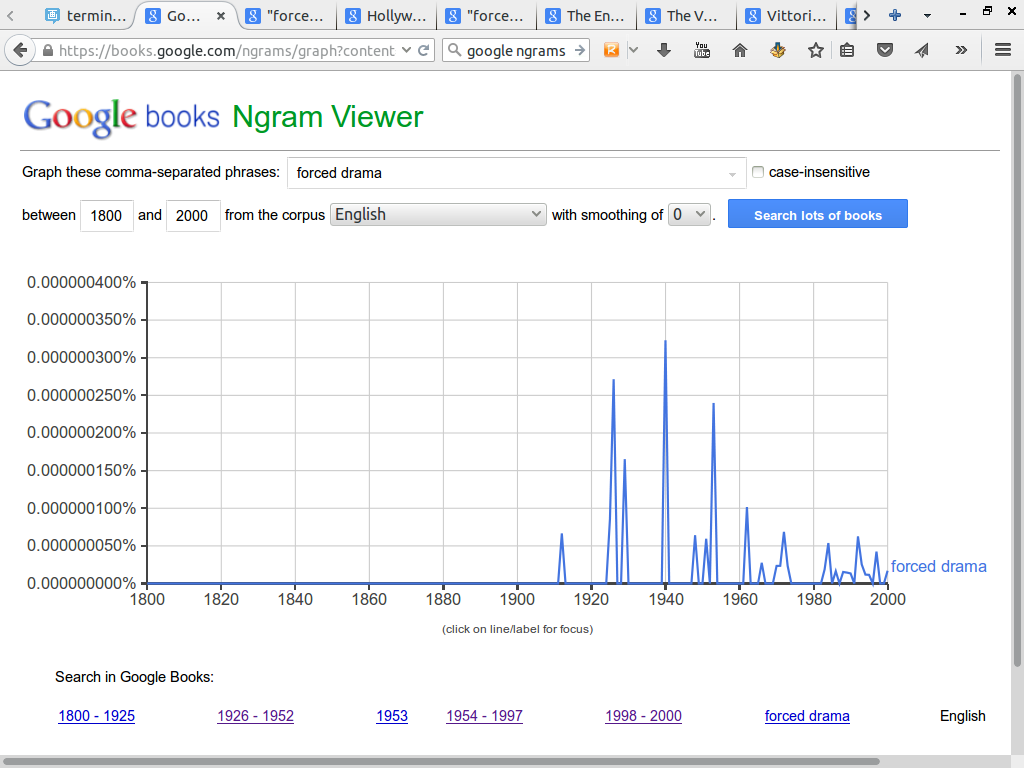 We can see that the first appearances of the phrase are shortly after 1900. One of the earliest I found was a theater review of the play "Dr. Wakes' Patient" from a 1905 issue of Illustrated London News:

The real play, it must be admitted, only begins at almost the close of the third of its four acts, when the old farmer rounds (in true Adelphi fashion) on the scornful peer who is horrified by his "common"-ness. But then come tears and affecting if rather forced drama [...]

As in the classical music book from 2003, this usage seems to be just a nonce coinage, not a discrete lexical item like the question describes.

I dove into the results from the years 1926–1952, but most of those usages, again, seemed to mean something slightly different from what the OP describes. Many of them seemed to refer to uses of color (in art) or pageantry and costume (on the stage) that the writer found overblown or unnecessary. E.g. this Art Magazine issue from 1947.

However, the years 1954–1997 proved more fruitful. Italian director Vittorio de Sica seems to use the phrase with more or less the same meaning as that understood by anime fans. In an interview, De Sica and the interviewer are discussing his film Two Women, which was based on a novel that the interviewer seems to feel de Sica may have adapted too faithfully:

S [the interviewer]: Don't you find it [the novel Two Women was based on] melodramatic? Can you believe that the young girl, after being raped, would turn so quickly to sexual license?

S: It seems opposite to the kind of truth I find in The Children are Watching Us and Umberto.

DS: Yes, it is forced drama

This interview was published in 1972 in the book Encountering Directors. You can read more of the interview in the 2000 anthology Vittorio de Sica: Contemporary Perspectives, where it is included as the first chapter, De Sica on de Sica.

In Two Women (novel) on Wikipedia, the girl that de Sica and the interviewer are discussing, Rosetta, is described as "a naive teenager of beauty and devout faith." However, during the novel:

On their way home, the pair [mother Cesira and daughter Rosetta, returning to Rome after it is taken by Allied forces during World War II] are attacked and Rosetta brutally raped by a group of Goumiers (Moroccan allied soldiers serving in the French Army). This act of violence so embitters Rosetta that she falls numbly into a life of prostitution.

De Sica and the interviewer find this event unrealistic. They have a hard time believing that a "teenager of beauty and devout faith" would immediately become a prostitute upon being brutally raped, and imply that this only happened because the writers wanted to make the situation more dramatic. This appears to be nearly the exact meaning that the anime fandom generally assigns to the term: an event is "forced drama" if it is improbable or feels contrived with the sole purpose of creating drama that would not arise naturally from the situation.

The 1986 fiction book Hollywood Heroes also seems to use this phrase in the same way as anime fans:

The stereotypical image of soap operas in the US is also in keeping with the anime fandom's usage of "forced drama"; conniving ex-girlfriends and evil twin brothers are constantly coming out of the woodwork to throw a wrench in the heroes' and heroines' plans at happiness.

In my initial searches, I found several uses of "forced drama" in modern film, television, and theater reviews, including this review of the film Confessions of a Teenage Drama Queen and this review of the film A Little Help. Both of these articles use the term in ways that seem consistent with Vittorio de Sica's usage, which I have argued is very closely related with the usage in the anime fandom.

My own research did, however, suggest that the term is much more common in discussions of anime than in discussions of other types of media, as presented in the question. I have only speculations for why this is. "Forced drama", across all the usages I've found, is a broad, subjective term which consistently describes dramatic events which are implausible and written without subtlety. Anime, by its very nature, does not lend much plausibility to the events which occur. Though there are anime which are subtly written, the norm for anime writing, especially in the genres most commonly seen in Western countries, is not subtlety.

Since there are many anime containing events which could be reasonably described as implausible and unsubtle, it makes sense that a term describing such events would become common among anime fans. However, as I mentioned at the outset, I wasn't able to find out exactly when the term entered the anime fandom, and I have no proof to support my hypotheses about how it gained popularity. I hope that another answer can fill in these gaps.

54
Where does the term "waifu" come from?
10
What exactly does "best girl" mean and where did the expression originate from?