What's with the "x" in "Hunter x Hunter" (and other anime/manga)?

I am wondering what the "x" in "Hunter x Hunter" means. To clarify: I am also talking about what the "x" means in general as many other anime/manga also have it in their titles.

A quick Google search for this question returns a Yahoo answer result which claims that the "x" is just for style and has no meaning whatsoever. Is this correct? Does this also apply to other anime?

I've done some searching about the names like this, and I wasn't able to find any particular explanation. Some people say it's just for style, other argue that the × is another form of "vs" (which kind of makes some sense), or "and" (like &), or "with". (Not to mention that it might also mean "kisses" like in "xoxo" = "hugs and kisses", but that's most likely irrelevant :P)

It's worth noting that it is not uncommon to find odd letters in anime/manga titles (e.g. Lucky ☆ Star - らき☆すた has a star in the name) and even in character names (e.g. Black☆Star from Soul Eater has a star in his name as well). Also the 'x' in "Hunter × Hunter" is not actually the letter 'x', but rather the symbol ×.

So, considering the above, I would personally say that it's just for style.

A warning if you are planning to search on some of the titles listed below as some contain NSFW content.

To add to the previously accepted answer, while the × or ×'s in anime titles will usually not be pronounced, leading to the idea that this is just for style or preference, this is not always the case.

Another reason I see as to why this is just for style or preference in some cases is because as far as I know, there is no × or X in hiragana or katakana, unlike in the English alphabet. I also have not yet seen an × or X in kanji or a representation of it in kanji. Examples of where the × is not included in the translation include (I got their translations from their respective Wikipedia pages):

As you can see, the × is not included in the translation. If it was, it can be translated as 'ekusu' (エクス) or 'ekkusu' (エックス) (I'm still learning Japanese so any corrections on its katakana equivalent would be welcome). But, in some cases, the × might represent another word. I found an example in the anime Romeo × Juliet. According to its Wikipedia page, this is not pronounced as 'Romeo Juliet' but rather 'Romeo and Juliet' (ロミオ×ジュリエット or Romio to Jurietto) where 'to' is the Japanese equivalent of 'and'.

Thus, this varies depending on the anime or the manga title. I suggest you check the Wikipedia pages or something similar of works with the symbol '×' if you want to verify whether or not they are pronounced or if they are read as other words, like in the case of Romeo × Juliet, or if they represent something else.

In the case of Hunter × Hunter, it is not pronounced and has no meaning whatsoever. The image below is from Volume 6 of the VIZ translations. 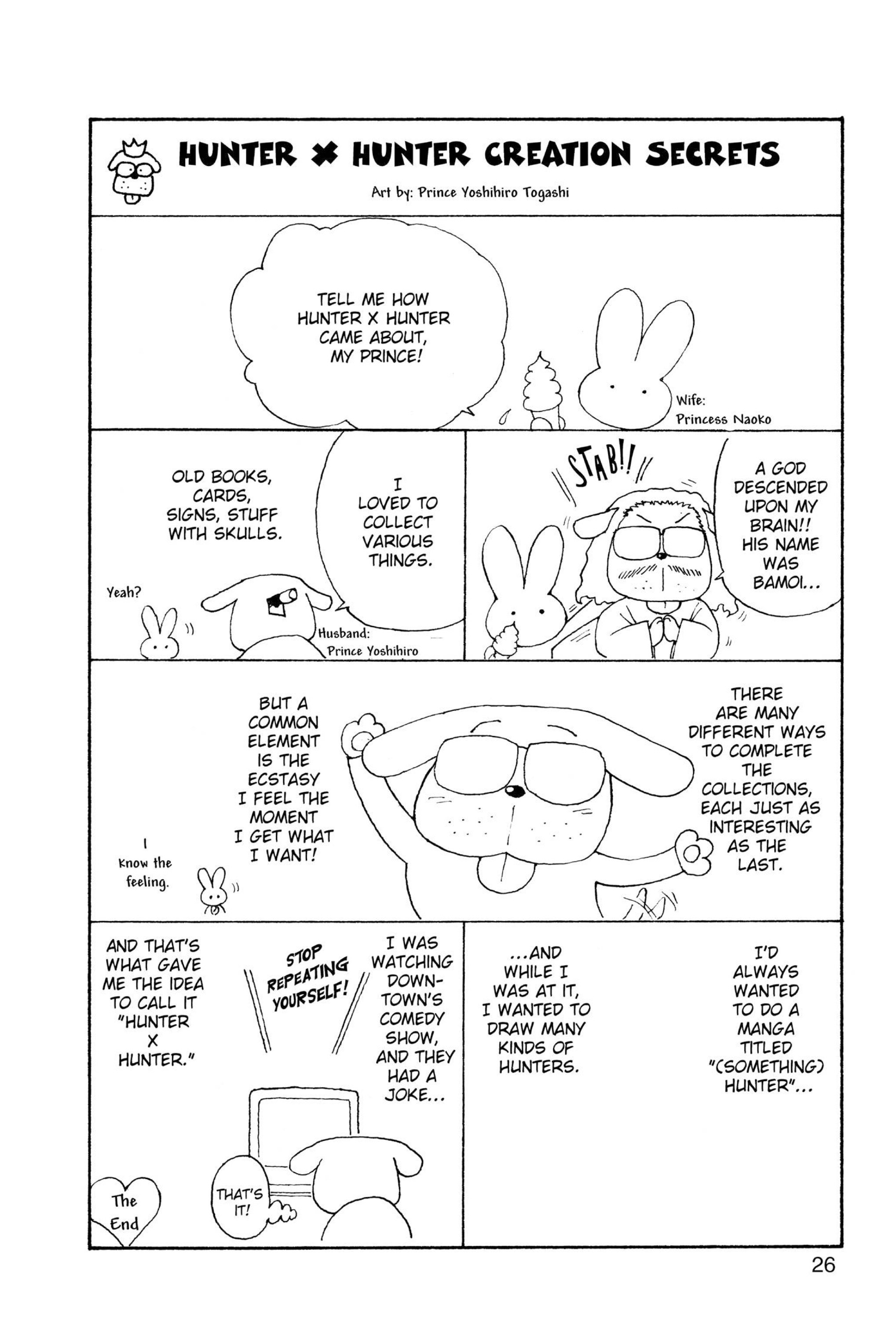 Togashi was only focusing on naming a manga that has the format '(something) Hunter' and after seeing a joke about repetition, decides to repeat the word Hunter as a title. He did not mention anything relevant about including × so in my assumption, this has no meaning whatsoever, unless of course he only did that to prevent spoilers about something in his story that has yet to be revealed.

It could mean "Hunter of Hunter" as x, as a multiplication symbol is often replaced in equations with the word "of".

For example, "5 of 12" means 5 lots of 12, and 5 x 12. Thus, the x in Hunter x Hunter could also follow the same pattern, and mean "Hunter of Hunter", which would also line up with Gon's goal to search for his father.

He's a hunter, hunting for his father, another hunter.

The 'X' probably means "cross." In math it can be seen as "vector X vector." Which is to cross-multiply two vectors, the result is a vector 90 degrees to both vectors. To "cross" someone is to challenge them. So the title is read as, "Hunter Cross Hunter."

The 'X' has been used in other titles such as: "X Multiply" as NES game which I think is just a clever way to say "Cross Multiply" "Street Fighter X Tekken" a multi-platform game(PS3, Xbox360, PC, etc.) which is also said as, "Street Fighter Cross Tekken." Because it is a crossover game.

And "XX" would be "double-cross." Also, title ending in an 'X' may not mean anything, just to look and sound cool. Such as "Castlevania: Dracula X."

High School DxD was, I think, obviously about "double D's", because all of the girls were so well endowed bra size wise. Maybe Hunter x Hunter means "Double Hunter". I'm just speculating here. It could just be stylistic, like others have already said. But the Japanese people are well known for their love of wordplay. And because of that maybe several of the answers here are actually right. Only the Author knows for sure, and he's unlikely to spoil the fun by telling us.

It is so funny to watch people attempt to answer this with logic and sound so confident!

As a branding expert, it is a stylistic choice to imply 'and' but more of a 'with' implication. So a partnership in business, either temporary or permanent you will see this sometimes, more often than not, in fashion cobranding partnerships. Like if Marvel partnered with JCPenny, you'd most likely see both logos with the x between them. Some confused this with a pipe, but that is meant more for further explanation of a division or group within the same parent company. It isnt really logical other than simply a stylistic choice that someone came up with and others ran with.

With crossover fighting games it appears to be used as something of a blend between versus and and/with, as the two companies (as well as their characters) are both collaborating and competing at the same time. With anime, where meaning is present at all, I suspect it's a similar blending of usages. I supposed in some, where it's not pronounced orally, the reasoning is there's no equivalent single word. Less, in this case, stylistic use and more a practical use (much like a contraction), albeit with notable inconveniences when trying to discuss it verbally.

Some shows such as Highschool DxD have the title in their intro song in which you can hear what it stands for; by. So Kiss x Sis will be read as Kiss by Sis (it was either the opening or ending or throughout the show, but it was pronounced as kiss by sis, not sure where to find it). Highschool DxD will become Highschool D by D (in the song you can hear D by D). However this isn't final, based on other shows x can hold multiple meanings which become for example and or versus or just the multiplication. Some examples to illustrate what I am talking about:

With Hunter × Hunter for example the × is never pronounced but can be seen as a symbol indicating Hunter versus (or and) Hunter which is extremely fitting to the show itself.

Plenty of shows also use different symbols in their title for example Steins;Gate, Choukadou Girl ⅙, .hack//Sign, Tokyo Ghoul √A, Saiki Kusuo no Ψ Nan. Based on that the symbols pretty much always have a meaning related to the show itself. So in conclusion whether x (or ×) is pronounced or not it always has a meaning that fits the show. It however doesn't have a solid standard meaning. Sometimes the meaning is a lot easier to decipher and in other occasions it becomes quite a journey to discover what it means. The titles I picked as examples all have meanings in which you can see that some are extremely straightforward (if you watched the shows) while others aren't.

Others have offered valuable insights. I believe that this is common notation in matrices. In most cases it is like a 2d space, X axis then Y axis. A matrix of dimension 5 x 10. Pursuit × And × Analysis (Episode 59), Pursuit is contrasting to Analysis as is Aggressive x Passive. So imagine Passive is X axis, Aggressive is Y axis. They are somewhat disjoint, yet are important factors in victories. Chasing × And × Waiting, Restraint × And × Vow, Defend × And × Attack, all from Episode 40s and so on, the first is either passive, then there is aggressive. Other instances like A × Shocking × Tragedy (Episode 43) are a mere continuation of this style, they can be seen as exceptions.

0
What is up with the 'x' in Spy x Family?
24
Why do lots of anime titles have ☆ in them?
6
What order are couplings like 'CharAxCharB' in?
2
Significance of "cross" on cover page?

18
What are the different colors in anime production drawings for?
5
What kind of animation/drawing style is used on K-On! Ura-on?
17
What manga chapter does the Hunter x Hunter 2011 anime end on?
0
Meaning of the term 'plotless'
1
Why isn't Digimon consistent with its rule mechanics per story/season title?
38
Why isn't anime critically analyzed like other forms of literature or entertainment?
10
Why is pornographic anime and manga referred to as "hentai" by non-Japanese sources? And when did it start?
1
Does Hunter x Hunter manga progress further than the Anime?
0
Why do first episodes of anime sometimes use content from several chapters into the manga or novel?
0
What's up with anime movies that are really sequels to series instead of adaptations from scratch?