Why does the Chimera Ant bat suggest that water weakens sound? 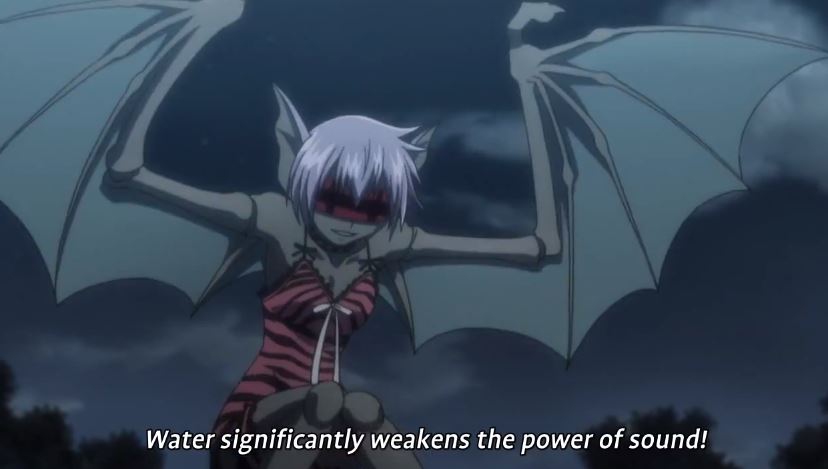 But water is a good conductor of sound. Why does she say this?

She probably says this because water weakens the effect of the technique, secret sound, that Bat.

In this scene, Gon rips a bit of his trouser pocket before making them damp with saliva and stuffing them in his ears, effectively making earplugs for himself.

Practically speaking, fabric itself doesn't make good earplugs, but by dampening it, it works quite well.

If Bat's sound waves cannot be heard as well, it won't have the same effect. Therefore it is weaker.

It's important to note that the original phrase was: 水は音波のエネルギーを著しく弱める

Which can be translated, taking in context, to: Water significantly weakens the energy of the sound wave.

Therefore it could be her referring to how water is weakening the effect of her technique, instead of sound in general.

Because water is more dense than the air, the sound does travel faster through water, i think about 4 times faster than air! but because water is dense it also needs more energy to moves the water particles ! which is why you can hear a faint sound in air but in water it doesn't even start, so you can't hear anything
in the end what you read in the link you mentioned is a talk about sound speed, which is indeed faster in water, and even faster in metal ! but there are variables such as initial energy needed for moving the particles, so you can hear
This site too, explains about sound travel under water
http://indianapublicmedia.org/amomentofscience/how-sound-travels-under-water/

4
Are the female appearing ants female?
1
Why do Chimera Ants seem to remember only one past life?
3
What was the favor Brovada mentioned in the Chimera Ant Arc?
1
What is the song in Hunter x Hunter when someone is about to power up?
7
Why didn't Netero call the more powerful adventurers for help in Chimera Ant arc?
6
Why is Adult Gon Freecss' hair so long? Why is Illumi's hair long?
4
Why wasn't Hisoka interested in fighting Meruem?
3
Why didn't Killua use Nanika in the Chimera Ant arc?
0
Why Chimera Ants who were created from humans have the physical appearance of animals?