If you had two automail arms, could you still use alchemy?

So, say someone in the Fullmetal Alchemist world lost both of their arms.

Could they still preform alchemy with their automail arms? Is there a way to adjust the automail so you can use alchemy?

As Scar mentions in episode 5, the only requirement is for the person to produce a circle. Izumi states that this is what lets the transmutation energy flow (or "power", depending on your sub/dub). Most alchemists draw transmutation circles, but those who have seen beyond the Gate of Truth instead create their own circle with their body. 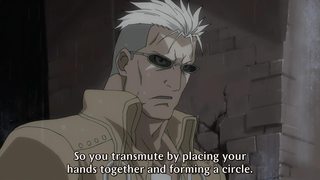 Izumi: A basis of a transmutation circle is the power of the circle. The circle displays the circulation of power, and by sketching the construction symbol in it, it becomes possible to activate its power. This is also a circulation of power. It's best to experience it for yourself. Now... Review it until lunch is ready! 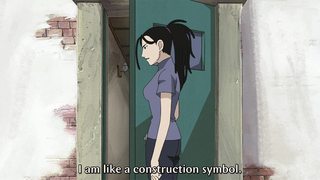 Ed is able to do his through clapping his regular hand with his metal hand (or gloved hand) because the flesh pushing against the metal creates a circular seal for the energy flow.

Al is able to do this because both his "hands" are gloved, so the fabric can compress together enough to create the same kind of circular seal as above.

So, as long as the two metal arms could compress together in a circular pattern, the user could create the required energy flow, and would be able to use alchemy (as long as they had been through the Gate).

3
Why can't Ed perform alchemy without his arm?

8
How come Alphonse can do alchemy in Fullmetal Alchemist: Brotherhood?
8
Why does Edward prefer to use his automail over Alchemy?
4
How does the hierarchical rank system in Amestris armed forces work?
7
Why did Julia lose her leg?
8
Can someone learn more than one alchemy?
4
Why can't the homunculi perform Alchemy?
13
How is King Bradley's sword so sharp?
1
Could Edward regain the ability to perform alchemy after the events in Brotherhood?
3
Why can't Ed perform alchemy without his arm?
4
Why is Al's armor so big?