Why does Saitama have such a simplistic design while others characters are so amazingly detailed?

Why is Saitama, the main character of One Punch Man, looking so plain, while everything in his world is so amazingly drawn? I mean even everyday things are so detailed to the point that we can consider it an amazingly painted masterpiece, while his design is like being tutored on how to draw... 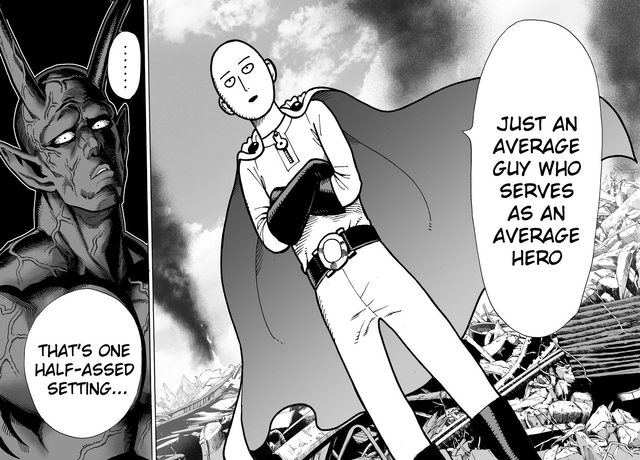 Because that's just how it is.

Saitama is SUPPOSED to be boring and silly looking by design as part of the comedy. Instead of a "cool" looking hero like Genos, who in any other work would be a shoe-in for the main character, the story ultimately revolves around Saitama.

Now...Murata's version does give Saitama his due when he's being serious or intense, but generally he's just so bored or disinterested in the fight it's not worth the effort to put out that kind of appearance, so the crude or low quality drawing is simply to emphasis how little effort or attention he's giving to the situation.

In the original verison (with art is done by author himself and is VERY crudely and lazily drawn in most cases), his design never really changes that much and he's always plainly drawn throughout the series, while the other characters are generally given more detail. (the lazy-mode Saitama is a cleaned up version of the original version Saitama).

He's not the only one though...there's another character who occasionally shifts into their original form when Saitama finds them annoying as we see them from his perspective.

3
Does Saitama have enhanced senses?
4
Why does the Hero Association ratings have several S-Class Heroes to be more powerful than Tatsumaki?
1
Does Saitama have any friends outside the heroes ones?
1
Why does "Tornado of Terror" have so much power reserved in her storage?