What happened between the time when she was shown as a quiet and shy little girl and the current her? Has the author ever being asked about this?

I believe that because Kyouko was being bullied, she became shy and wary of people and her true personality was being suppressed. 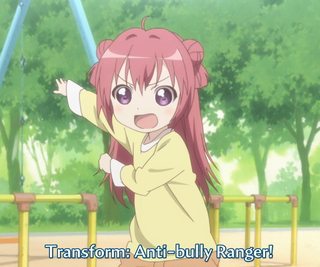 Once Akari came to stop the bullying, Kyouko would have been able to have more confidence in herself, letting her express herself more, becoming the Kyouko we know and love today.

As for an official statement, I can't seem to find one on the author's Twitter account, or from googling - but I'm fairly certain it would be a similar answer to the one above.

7
What did Chinatsu make?
8
Was Kyoko and Chizuru's first meeting ever shown in the manga?
9
How does this calendar thing even work?
10
How can a clock stop working at 99 o'clock?
7
What is this sheet Toshinou Kyouko is using?
6
Is Akaza Akari the same grade as Toshinou Kyouko and Funami Yui?
9
Why did Funami Yui accuse Toshinou Kyouko of playing dirty?
7
Are the items featured in Yuru Yuri San Hai! cross review based on real items?
4
Why did Sakurako call Akari a "betrayer"?