Why does Chopper hide himself the wrong way?

When Chopper wants to spy into a room, he hides the wrong way, so that he is exposed totally. Why does he do that? It can be seen multiple times through the Manga. 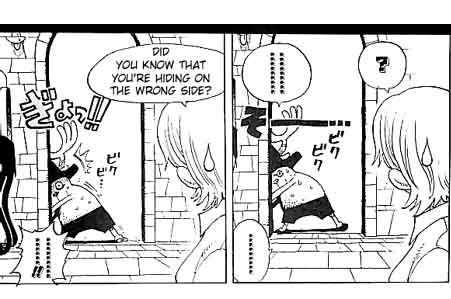 It is a Running Gag, which along with his other peculiar actions1, is used for comic relief and to bring out his childish and naive personality.

Chopper as a child was treated very harshly due to his blue nose and isolated from the rest of his herd. This became even worse after he ate the Devil's fruit. I think the gags, besides offering comic relief, also subtly reinforce that Chopper hasn't grown out of childhood mentally due to those experiences.

Another explanation is that although his instinct tells him to hide, he subconsciously sees this as isolating himself, and wants to avoid going out of people's sight, ending up in that comical hiding pose. (This is the most convincing "serious" reason I could think of, don't know if Oda-sensei thought so seriously about it.)

1 Believing Usopp's lies, getting excited about beams, and the cursing dance.

9
Does the size of a person matter when Devil Fruit powers are involved?
6
Have any Zoan types other than Chopper gained the ability to transform into more than three things?
1
Law vs Breed: why didn't Law use room to remove collars?
18
In the male quarters, how exactly does the male crew of the Thousand Sunny sleep?
3
How many transformations does Chopper have after time skip?
5
What is the other goal Zoro mentions in the Alabasta arc?
3
Why does the Den Den Mushi look so much like their owner?
3
What happened to Katakuri's mouth?
4
Why doesn't anyone go over the Calm Belt?
0
Did Chopper mishandle the candy incident?