How did Kushina survive the extraction of the Kyuubi?

While Kushina gave birth to Naruto, Tobi came in and used her weakness to extract the Kyuubi. That was the first shown event, where a Jinchuriki survived the extraction of the tailed beast. How could Kushina survive that? 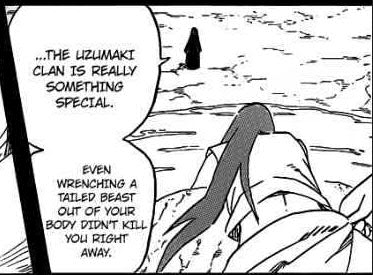 One trait of the clan is that they have immense amounts of chakra in their reserves and are unrivaled when it comes to sealing techniques; as shown by Minato Namikaze who was taught by Kushina Uzumaki, his wife. They also were known for their extremely long lives and will to do what they need to do. such that they can even survived after the extraction on which gaara wasnt able to do when the shukaku was extracted from him.

The members of this clan possess incredible longevity and vitality seemingly inherited from their Senju ancestry. One notable case is that of Mito Uzumaki, who lived from before the founding of Konoha, to well into the term of the Third Hokage's reign. This vitality was the reason Kushina survived the extraction of her tailed beast, though she was greatly weakened.

13
How and why did the Tailed Beasts grow up?
9
Why does Naruto get a cloak from the Nine Tails while other Jinchuriki don't?
2
Can the Nine-Tails now leave Naruto's body at will?
2
How can Naruto talk to the tailed beasts?
1
What happened to the power of the tailed beast that was inside Naruto?
2
How many times was the nine tailed fox used to attack the leaf village?
3
At what point did the Kurama stop sucking Naruto's chakra?
1
Is it explained anywhere how the Nine tails biju was kept in control by all its jinchuriki?