Who is the Seventh Sin?

I recently watched the anime but in the end I couldn't remember who the seventh sin was. He was shown as Escanor in the first episode (about 4:43). Is it possible that he isn't showing up in the anime? Or is he impersonated by someone else?

Most probably by the seventh member, you mean Escanor because he was not introduced in the anime primarily. However, if you pay attention closely, he appears in the last OVA of the Seven Deadly Sins. At 23:46 in the OVA 4, Escanor appears outside a cave carrying a barrel. He will be quite active in the recently announced sequel Seven Deadly Sins 2.

The members of the Seven Deadly Sins along with their Symbol, Animal Spirit and their super powers are as follows:

Here is a pic of the seven members for your reference: 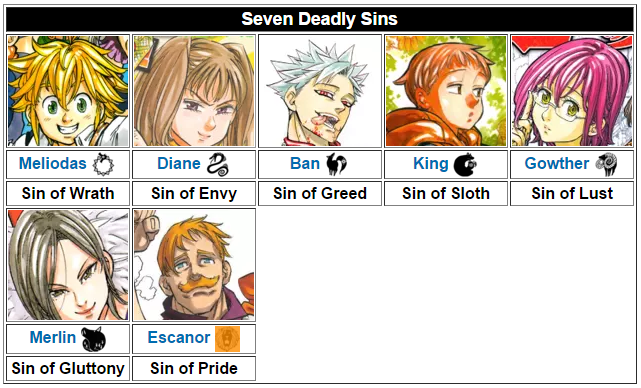 Hope it helped you.

The Seven Deadly Sins consist of:

Escanor is the one that doesn't appears in the anime. He's revealed in a special side story in the manga called the Vampires of Edinburgh. If I recall right, the location of Escanor is unknown which is why he didn't appear in the anime

11
Which manga chapter does the season 1 of the anime end on?
2
What is the music playing in episode 14, when Gowther was talking about the cycles in the cave?
0
What is the relationship between the end of season one and the short season two?
1
Who is the Mother of Meliodas, Estarossa, and Zeldris?
5
What do the numbers written in the top left corner stand for?
4
What are the sins of the 7 deadly sins members?
1
Why Zeldris has the power of the demon king?
0
Who attacked Gowther when he was brainwashing Dreyfus?
2
Who were the original Seven Deadly Sins?