Did Monet's Yuki-Yuki fruit turn her into a harpy?

It was Law who turned her into a harpy. The Yuki Yuki no Mi had nothing to do with it. Much like the pirates who lost the use of their legs became centaurs, it was Law who turned Monet into a harpy; the only difference is that the change happened willingly in Monet's case; the reasons weren't explained as far as I can remember, but it was most likely to make her stronger.

I know this has been pointed out before in the flashback that Monet had normal human limbs, but I still like to think that there is a harpy race out there.

Perhaps harpies have a similar aging system to mermaids.

*She could be switching between human and harpy form like Kokoro does. We've learned that mermaids over the age of 30 can do that. That could possibly also correlate to harpies. After all, we don't know Monet's age. *First you start as a normal human, then when you reach a certain age you grow wings and a tail. But you can change back and forth freely from human to harpy limbs. *To me, Monet's wings seem too similar to Lafitte's wings for it to be a coincidence, so Lafitte might be a Harpy too. I also don't know how sure I am since there might be some sort of angel devil fruit that Laffitte could have ate to explain his wings.

But when I checked I found something. Monet's picture in volume cover, her legs look normal. While when you look at her other pics, her legs are in form of limbs of a harpy/bird.I have provided the pic below. 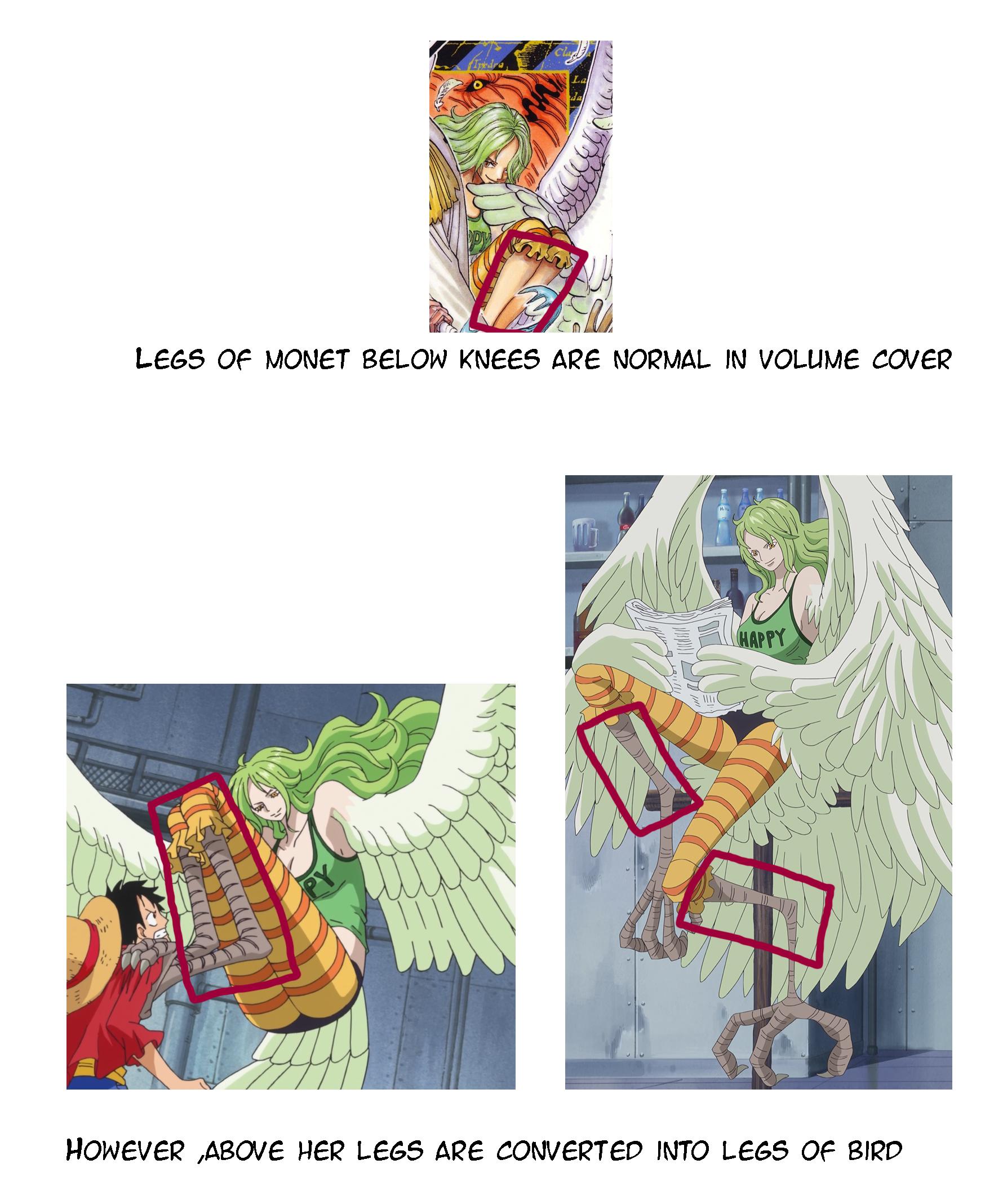 So ,I think Monet is able to transform her normal limbs to Harpy limbs whenever she wants. Similar to that of mermaids.

Another thing to note, the tips of her wings match her hair color which would not really make sense if those wings were not hers to start with. Yeah it looks more like genetic relation between wings & hairs, both being green. 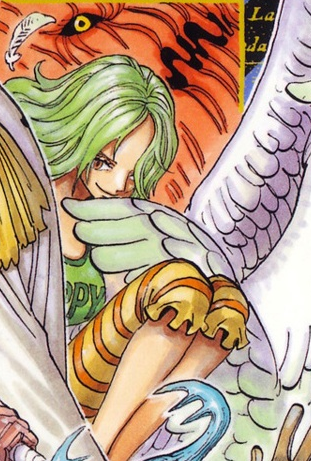 Furthermore, the word "Happy" on her t-shirt could be a play on words with harpy, too much like Oda.

Just, speculating that she might belong to a Harpy race .:D

9
Does the size of a person matter when Devil Fruit powers are involved?
0
What class of Devil Fruit does the Gomu Gomu no Mi come under?
19
Does Sugar remember who she had turned into a toy?
2
Why are they trying to pass out Sugar instead of beating her into a pulp?
2
Where did Nami get her Clima-tact while fighting Absalom?
4
Why can Devil Fruit users use their abilities while wet?
6
Why couldn't he simply turn into fire and repair the damage?
9
What would happen if Devil Fruit that Chopper ate were eaten by a human being?
8
Was mother Caramel eaten by Big Mom? And does eating Devil Fruit Users transfer the powers?
1
Can a non devil fruit user use Haki with Seastone cuffs?