Why is it that cursed children are all female?

In the first episode of Black Bullet, it was said in the narration that all cursed children are girls. Has this been explained why in the light novel? Are the boys instantly turned into gastrea when infected by the virus or what? As far as I can tell from the 13 episodes of the anime, it wasn't explained.

I can't say for sure if or when this is mentioned in the light novel, but the manga certainly covers it more explicitly.

In some cases, the Gastrea virus can enter the mouth of a pregnant woman, and this can lead to the birth of a 'Cursed Child' 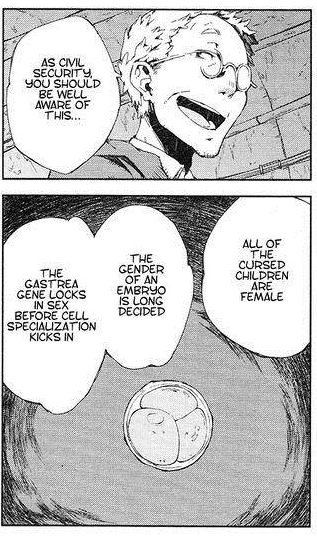 Simply said, once the Gastrea virus enters a mother and infects a fertilised egg, the virus itself will force the child to become female, in addition to receiving the other common traits, such as red eyes. If an embryo is already past the point where cells have begun to be specialised and it's sex has been decided, the Gastrea virus will simply infect the child just as it would with any other human.

Not the answer you're looking for? Browse other questions tagged black-bullet or ask your own question.

5
What is the meaning of the animal “models” of the Cursed Girls?
5
Are all the Initiators/Cursed Children 10 years old? Were there none born after that?
6
Can shape corrosion of an Initiator's body be reversed, or only contained?
5
Are cursed children vulnerable to varanium?
1
Why is the Tricycle the catalyst?
0
Does cursed children erosion rate grow as time passes?
0
How is that mechanical soldiers and cursed children can be held by a couple of regular humans?