Is there any explanation for Whitebeard's Crescent-shaped mustache?

Does Whitebeard's mustache, which looks like the moon, have any meaning? 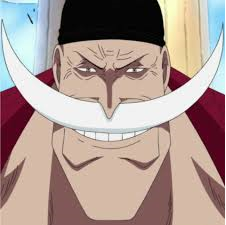 According to the wiki,

Later in his life, he grew the prominent crescent-shaped mustache, which would spawn his epithet, "Whitebeard".

Well, there's no canonical reasoning to it as it seems. But in mangas and animes the animators and/or mangakas usually make certain characters (especially the important ones) in such a way that they stand out from the rest, to make an impact of that character on the fans/viewers/readers minds.

One more reason I thought of could be that the mangas are made in black and white. So there are no colours to support the uniqueness of the characters. So the mangakas rely on the visually striking exotic characterisation of the characters and that has actually worked! It's a psychological successful experiment to make the colourless pictures worth remembering. The mangakas try making most unique characters without violating the copyrights of other characters' appearance from other animes and without making it look like a cliché! (He is playing with your mind and you don't even realize it!)

It's one of the main reasons that animé characters and animes appear weird to the people who don't watch them because the characters are so unusual and unique!

You can figure it out yourself: think of a character and what comes to your mind first (let's say from One Piece and ignore the coloring of the characters):

I can go on and on for all characters across all animes but this much might suffice...

You can visit wikiHow if you want to know more about how characters are designed. If you are a real otaku and want to know deeper about how the mangas are made, try Bakuman Anime.

Hope this helps and proves reasonable.

3
How can Enel reach the moon?
8
Does the usage of Haki affect the user in any way?
7
Who does the Fishman Island territory belong to?
14
What does the print on Franky's shirt mean?
3
How did the Straw Hat crew become stronger in Enies Lobby?
8
Is there any particular reason behind why Dressrosa is such a long arc?
2
Can conquerors Haki give someone brain damage?
0
How did Aokiji survive Whitebeard's attack; observation Haki or something else?
2
If mastered enough, could Haoshoku Haki destroy a large piece of land, maybe crack an island in half at most? (One Piece)