Why did Luffy react to Nami's body, but not to Hancock's? 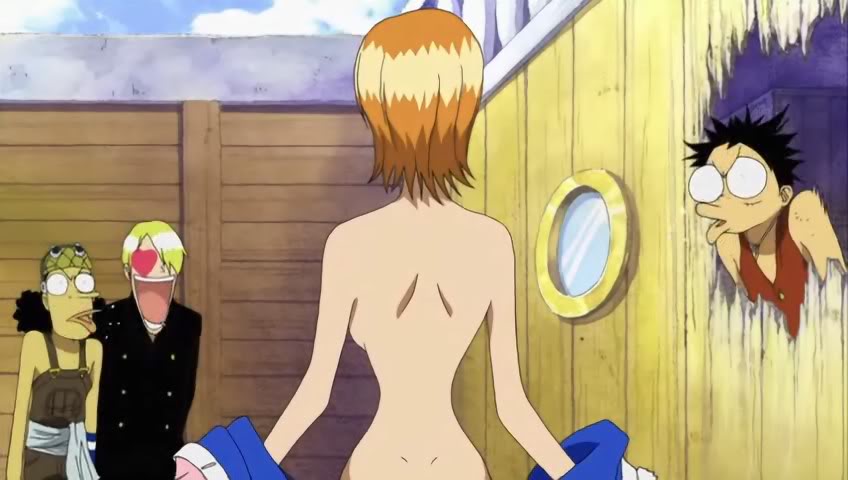 When Luffy saw Nami's naked body thanks to Mr. 2 and later in chapter 213 due to her happiness punch, he reacted and got excited. But on the other hand, when Luffy saw Boa Hancock naked it did not affect him in any way. Why was Luffy affected by Nami's body, but not by Hancock's body?

A different reader had the same question and according to Oda, it was all because of Usopp's bad influence. Luffy and Usopp are of the same age, so when they are together it would be like kids going on a school trip: their bad side comes out!

Reader: Hey, Oda. In volume 53, chapter 518, Hancock's "Mero Mero Mellow" had no effect on Luffy at all, but in volume 23, chapter 213, it looked like he had a reaction to Nami's "Happiness Punch". Why did he respond to Nami's naked body but no to Hancock's? Is Nami's body just that amazing? -Kazu

Oda: Wow, I got a lot of questions about this. Is this what you guys are paying attention to? Don't just read manga all day, go study some more!! Okay? Well, I say that, but I do nothing but draw manga. I noticed this when we were drawing it, but if Luffy had a nosebleed when he saw Hancock's body, I think you would all be like "Ehh!?". That's not the Luffy we know. I believe that Luffy reacted to Nami's naked body twice, in volumes 18 and 23, and both times it happened, Usopp was with him! He's the suspicious one! In other words, when Luffy is alone, his reaction is what it was with Hancock. He's interested, but he's not entranced by her. But when he's with Usopp, who's the same age, it's like a kid on a school trip: his bad side comes out!! Yeah, both sides of Luffy feel right to me, so the culprit is definitely Usopp!!

I think it's because Oda is a fan of Nami himself and somewhere else made mention that Nami is his favorite. (Hell he even Married a Nami from one of the live action Shows in Japan). So I think since Luffy is the main character he reacts to his own Nakama/Friends naked as more of a shock. Where as we know Sanji will just gawk at about any woman, even if they were wearing 90 layers of Parkas and had only one EYE visable LOL.

Boa is the one obsessed with Luffy, and Luffy can't be bothered by her. It'd be much like having a stalker, who is so entranced with you that if they stripped naked in front of you to get your attention, you still would "NOT care". Also with my theory why Nami affected him, think of if you saw your own friend of the opposite gender naked, you'd probably react with shock too. I know I would.

Notice how in the image provided, Luffy and Usopp have the exact same expression on their faces. I'd say it a combination of

After all, Luffy tends to be almost sociopathic in reaction when it comes to these kinds of situations. Fighting, food, treasure, and related topics he is all excited over, but girls he is oblivious to...

The reason it is like that is because Boa took it off to show the celestial dragon mark and just tried to kill Luffy, and it would be disrespectful to stare at Boa like that.

On the other hand, Luffy might actually just be impressed with Mr. 2's abilities, and Luffy has been friends with Nami for months and knows her personality.

user39995user39995
1
Add a comment  |
Highly active question. Earn 10 reputation (not counting the association bonus) in order to answer this question. The reputation requirement helps protect this question from spam and non-answer activity.

12
Why didn't Boa Hancock's attack affect Luffy?
11
How can Nami's punches hurt Luffy so much?
12
Why did Luffy ring the bell 16 times?
5
Did Luffy know who Sogeking is?
14
When did Luffy say: “Forgetting is like a wound.The wound may heal, but it has already left a scar.”?
6
Which parts of Franky's body have remained organic?
3
Does Luffy touch his enemies in Gear Second?
5
How did Luffy beat Katakuri?
3
Why did Luffy not command the Straw Hat Grand Fleet against the Big Mom Pirates?
1
Did Luffy really kill Arlong?