Rub a dub dub, Thanks for the grub

Occasionally I've seen "itadakimasu" translated as Rub a dub dub, Thanks for the grub.

Most often it's used as an joking example of subbing/dubbing that doesn't stick strictly to the original Japanese script.

Where does it come from though? Was there a show that actually translated it as such? 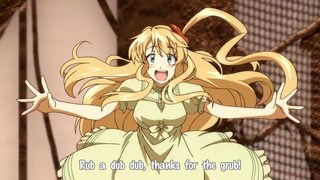 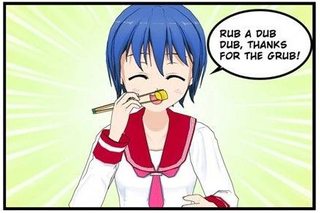 HamtaroWarrior's claims that it doesn't have much to do with anime and that "It just seems to be a way to translate "Itadakimsu"." [sic] miss the point.

There is, in fact, a clear anime-related reason that "rub a dub dub, thanks for the grub" has become emblematic of over-localized translation: the abortive [gg] fansub of Toradora!! back in 2008 featured this very line as a translation of Minori's "itadakimasu" in episode 4 (around 08:52). This is an absurdly over-the-top translation choice, as any American could attest - Minori is certainly a cheerful and quirky character, but this goes well beyond that.

This was widely hailed as an innovation in trollsubbing on [gg]'s part, and was one of the factors that cemented their reputation as the leading trollsubbers of their time. I mentioned that the fansub was abortive - indeed, [gg] stopped subbing Toradora!! after episode 4, and I guess they decided to go out with a bang (all of the relevant blog posts I'd like to cite appear to have bitrotted out of existence, unfortunately). I emphasize this again - almost surely nobody actually thought that "rub a dub dub, thanks for the grub" was a good choice here. Rather, it was presumably chosen to get a rise out of its viewers (and succeeded quite well at it!).

It is as a result of this particular incident that images like this one exist (the "gg" column, at least). Likewise, the Sasami-san@Ganbaranai image in the question is a deliberate "homage" (if you can call it that) to [gg]'s Toradora!! subs of auld.

Im very sorry that I accidentally tripped over this strand because now I feel obligated to contribute. When I was a pre-medical undergraduate at a small United Methodist liberal arts college in the late 1970's, I competed in intercollegiate athletics. We were obligated to "say grace" before a team meal, so this line was part of our team prayer. The full blessing was:

I hope this contribution rgarging the linguistic history of this irreverent ritual is helpful to this most fascinating discussion.

29
Has the “It's over 9000!” meme spread back to Japan?
12
What is the actual dialog for this Death Note swimming meme?
9
What are the original memes mentioned in Steins;Gate?
8
What exactly does “best girl” mean and where did the expression originate from?
17
Which anime did the pregnancy test meme come from?
6
Can I watch the full 'Nice Boat' replacement episode anywhere?
13
Where does the 'lewd' meme come from?
12
Where did the “Not this shit again” bad sub meme originate from?
10
Was there any canonical or production-related reason for the fights in Dragon Ball Z being dragged out?
13
Why is it said that the Tsukihime anime “does not exist”?