Why is Roa's appearance in the Hisui route different from that in "Near Side of the Moon"?

In the Arcueid and Ciel routes, Roa appears with long black hair in "Western" clothes. 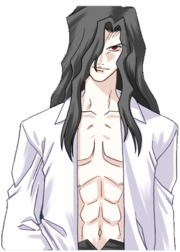 However, I'm currently playing the Hisui route, and I've seen that the original Shiki Tohno appears in Japanese clothing with short white hair at the very end. (For what it's worth, the adopted Shiki in this route doesn't know about Roa, but the player does since she must have had to complete either the Arcueid or Ciel route first to play this route, and the information appears there.) 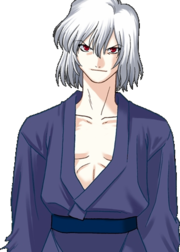 Yet regardless of the route, Roa and the original Shiki Tohno (which some translations name SHIKI) should be the same person. (The identity of the next reincarnation of Roa should have been decided by Ciel years before any of the different choices leading to different routes were made.) If so, why is there such a discrepancy between the appearance of Roa in the "Near Side of the Moon" routes and the Hisui route (and possibly other "Far Side of the Moon" routes)?

It's because Roa is inside the body of SHIKI Tohno, Akiha's blood-related brother, from before the start of the game as SHIKI was locked away inside the mansion after his Inversion Impulse

until Kohaku released him knowing he would kill his father, who sexually abused her as a child.

It is not true that:

Yet regardless of the route, Roa and the original Shiki Tohno (which some translations name SHIKI) should be the same person.

The discrepancy between the two is caused by who the dominating will of the two is. In the Far Side routes, SHIKI's will dominates (while in the near side it is Roa's that dominates).

SHIKI is the main antagonist during the "Far-Side Moon" routes, the stories of Akiha and Hisui. SHIKI's inversion impulse keeps Roa from exerting his will over him, resulting in a very deranged individual obsessed only with getting revenge on Shiki for stealing everything from him. Roa doesn't have an appearance in these stories besides a brief mention from SHIKI that something in his mind wants to take over.

The appearance change would probably be related to who the dominating will is. For instance, in his previous reincarnation, Roa styles his new body to suit himself as with Elesia, who looks different from Ciel today.

On the Type-moon Wikia page you'll also notice that Roa and SHIKI share the same page in much the same way Saber/Saber-Alter/Saber-Lily do.

5
Does the name Shiki have some sort of relevance to Death?
13
Why is it said that the Tsukihime anime "does not exist"?