Who are the characters on the two secret rubber straps for season one?

One of the pieces of merchandise for Symphogear season one is a "trading rubber strap", about half way down the second page of goods on the official site. There are ten varieties - Hibiki, Miku, Ryouko, and Chris in regular clothing; Hibiki, Chris, Tsubasa, and Kanade clad in Symphogear; and then two more secret ones that are shown only in silhouette.

Who are the characters depicted on the two secret straps? I can't tell from the silhouettes, though the shape of the one on the left looks suspiciously like Tsubasa's hair.

If you're still looking for an answer, it's a second Kanade and Tsubasa. Here is what they look like. (Source.) 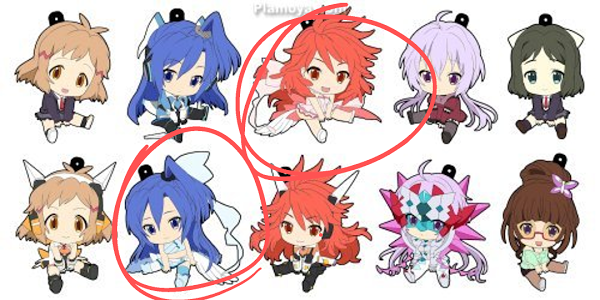 2
What is the difference between the 1st and 2nd NCOPs for Symphogear (season one)?
3
What does the “FG” in the formal name of the Symphogear system stand for?
9
Are the Symphogear activation chants translatable?
3
What was the concert program for Symphogear Live 2012?
3
When do the sub-titles (“determination to fist”, etc.) for each season of Symphogear get dropped?
4
Senki Zesshou Symphogear season 1: Does anyone know the name of the track that plays at 23:46 during episode 12?