How is the rarity of Devil Fruits determined in One Piece?

This is kinda an interesting topic, we often hear in the manga how certain types of Devil Fruits are rare (Logia, Mythical Zoan etc.)

But when Ace died, we had to wait for his fruit to reappear. This would suggest that his fruit is only one of the kind in the entire world. But at the Marine War arc, when Marco transforms into his pheonix form, it is revealed that his fruit is rarer than Logia.

So far I have yet to see 2 persons in OP that have the same DF, and are alive at the same time. So what does rarity of fruit mean?

I agree with the other answers that it is obviously related to type and quantity. But I think there is more going on than that. I think the rarity additionally stems from the rarity of the actual fruit it respawns in and the strength and the value the actual Devil fruit gives its user.

Additionally to type quantity, I do think the type of the actual fruit plays a big role as well. For example, there are many apples in the world. So when Smiley died and the Axolotl model Salamander fruit was reborn in the nearest apple, it showed that that specific fruit will most likely be discovered pretty soon, seeing as apples are so ubiquitous around the world. While if you compare that to the Operation Fruit, which is shaped like a heart, it is safe to assume that when Law dies it will be only able to be reborn in a small part of the world, seeing as there aren't too many fruits shaped like a heart. This would in turn make it difficult to find, making it much rarer than the Axolotl fruit (apple), Giraffe fruit (banana) or String fruit (pear) for example.

Finally, I had found the same question on reddit, at which one of the comments mentioned that the rarity could also be related to the strength of the specific fruit. Stronger Devil fruit powers, inherently make it less likely for the user to die. Considering the fact that many fruits are still unknown in the One Piece universe even today, certain fruits might even be unknown due to their low spawn rate. The less frequently it respawns in different place over the world, the less likely people come in contact, making it seem rarer, then it might be. For example it took Blackbeard many years to find his desired fruit, making it seem a very rare fruit (which it is).

Related to previous paragraph, I believe that the value of a certain fruit adds to its rareness. This does not necessarily mean strength, as we have seen with the Operation fruit. This fruit does not inherently make someone strong. The power is not magic as mentioned by Corazon and requires a lot of knowledge. The World Government priced it at 5 billion Beli, seeing how much power it holds as it is considered the "Ultimate Devil Fruit". Compared to that we have the Revive fruit, which has an extremely low spawn rate, yet nobody seems to care much about this fruit, seeing as it isn't that desired by the majority of people. 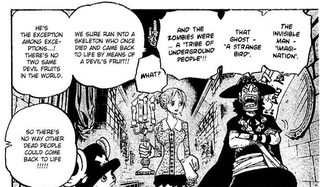 Reader: Excuse me!! May I pose a serious question to the typically-vulgar SBS?? In Volume 46, Usopp said that the same power doesn't exist twice. But this doesn't make sense with what you said in the Volume 45 SBS... If the Gomu Gomu no Mi was in a book of fruits, then Luffy HAD to have eaten at least the SECOND known example of the fruit! Now, most beautiful and intelligent Ei-chan, explain it all! ✩ P.N. Takafi

Oda: Very sharp of you. But I'm cool. I haven't made any mistakes. As a hint, let me rephrase what Usopp is saying. "The same powers don't exist twice AT THE SAME TIME". How's that? For more detail, you'll just have to wait for a certain professor to make his appearance in the story, and explain exactly what the Devil Fruits REALLY are... Eventually.

Basically each fruit only exists once at any given time, when it's consumed by someone. Then the fruit will only reappear when the consumer has died. With the Ace situation, it took a long time to reappear because the fruit took long to find.

The rarity that you spoke of is based on the characteristics of the fruit. This mainly comes down to: Zoan, Paramecia and Logia.

Most of the Devil Fruits are either Zoan or Paramecia, making Logia a very rare and very strong fruit. Now there's the Zoan class, which have sub-classes. There's the regular beast that you can pretty much see in a zoo which aren't that rare, and can even be made artificially with the use of Smile. There are however 2 subgroups which are very rare because as in normal life you dont see those beasts, these are the Ancient Zoan, for example X Drake's Theropoda dinosaur. The other is the Mythical Zoan, which indeed includes Marco's Phoenix. The reason as to why these are so rare is because they share characteristics with both Paramecia and Logia. Making them extremely powerful.

Why are the Mythical Zoan fruits rarer than Logia?

Well that's rather simple to be honest. The number of elements that you can turn into Logia are much more than the amount of mythological beasts that can be formed.

I dont get how no one has mentioned, some are more rare because the user takes way longer to die because of their op fruit. But yeah if there’s only 1 of everything, rare isn’t neccisarily true

0
What class of Devil Fruit does the Gomu Gomu no Mi come under?
6
Who cursed the Devil Fruits?
3
Are Logia types overpowered?
12
What will happen if one person eats two Devil Fruits?
4
Why can Devil Fruit users use their abilities while wet?
4
Where do devil fruits "grow"?
10
Has Crocodile already "awakened" his Devil Fruit Power?
4
Can all types of devil fruit be awakened?
1
One Piece: Why didn't Spandam eat the Devil Fruit?