Is there a reason why Black Jack charges exorbitant fees for the surgeries and operations he performs?

In the series I often find Black Jack to be inconsistent due to the amount of free surgeries he performs while maintaining a reputation of charging insane medical fees. Are his ridiculously priced operations merely to get his patients to question the value of their (loved ones) life?

Perhaps the only consistency about his fees, besides their high price, is that if he feels he failed he will cancel the fee. The pricing seems totally random and he charges high amounts even for people that appear to be poor. I understand that as an unlicensed doctor he has no obligations to save someone. However, part of my reason for asking is that the reason Black Jack is alive is entirely due to the fact that a doctor took responsibility and saved his life. Normally, people would feel a sense of debt to this fact and try to repay this debt by doing the same in turn to those they meet in life. I don't think as a doctor he needs to give away surgeries or operations, especially with his level of expertise, but doctors are already well paid and it seems outrageous to charge as much as he does.

Is there anywhere in the manga or anime that solidly explains why he charges as he does, or are there any convincing arguments about this?

I've seen all the Anime adaptations, and read all the Volumes to the Manga, and from what I've witnessed in both the Anime & Manga he chargec such mass amounts in an effort to see if whether or not the patient truly values their life or the life of the one they are requesting he save.

Kuro himself went through a lot during his rehabilitation and because of his surgery (that was Incredibly risky) he was allowed a second chance at life that in itself is worth more than any monetary value.

Which is what brought about his overall philosophy.

Plus due to how hard he and his doctor fought to preserve his life and regain his physical abilities through rehabilitation caused a lot of distress, he takes patients whom he has saved through surgical means (who threaten suicide personally.) However, if they must go through excruciating rehabilitation and begin to complain or want to give up he is a lot harsher and impatient and will be blunt and state that he was himself was blown to bits as a child and still managed to regain full functionality and success, so they as his patients mustn't lose faith.

He doesn't seem to spend much of the money and lives, for the most part in somewhat poverty, Pinoko is quick to point this out multiple times throughout the manga and anime, but there are times when he actually won't ask for payment or will even take something in exchange that's worth if anything else just emotional or even no value.

There are times when he spends money, like when he makes trips around the globe for his patients, or when he purchases islands in order to preserve their natural ecosystem and to prevent urbanisation. 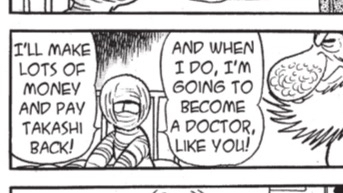 ^ Which I believe is done in memory of the little boy who donated the skin graft that he has on his face who later grew up to be a environmentalist, but was killed -sadly- during a protest.

He'll also spend it on spoiling Pinoko, who she herself suffered through an exhausting and debilitating physical therapy 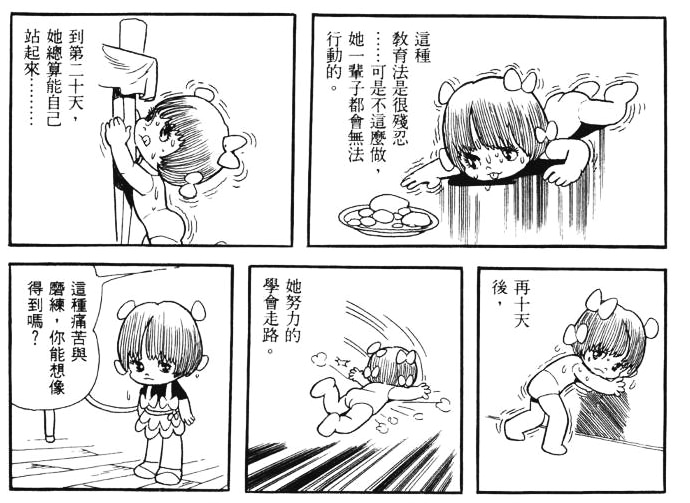 Since he's unlicensed he doesn't have to limit his skills to the rules that the medical association holds he is far more advanced and is well worth the extra dough. 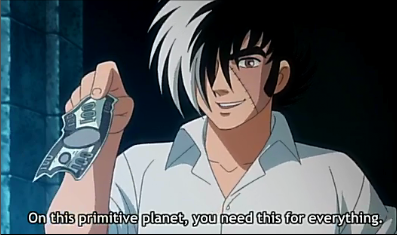 Especially when compared to the other doctors who are kept on a tight leash and consequensly are not as experienced or skilled as our good doctor Black Jack.

Plus since he ask for so much money, if the patient were to die or he'd fail the operation, those who would have had to pay the impossible fee would feel a sense of relief with not having to spend the substantial amount of money, and Black Jack himself may feel less at guilt for having loss a patient.

However no matter the circumstance Kuro always goes the extra mile for each patient, whether it be because of a promise, the pay, or because Pinoko insist that he help he'll never give less than his 100%.

Although in actuality it's his moral code and the fact that he owes his own life to a Doctor who took risks that he himself has become what he is today.

His goal is to save and preserve life, because nobody ever truly wants to die, and at the end of the day you don't take anything with you once you die, so the money itself isn't all that important to Black Jack.

(In the Manga and Anime there's a scene where he goes to a black Smith to sharpen his surgical tools and he pays a substantial fee for the job, the Smith then proceeds with throwing the money into the very fire and continues with the work. Kuro didn't protest or ask why and it's noticed that the Smith mentioned that the last time he preformed this task that he burnt even more money, so it's evidence enough that money doesn't really matter much to Black Jack)

I don't believe there was ever a solid statement in the Manga for Black Jack's high prices. However recently I came across two interesting stories in Vertical's volume #2 that might shed some light on Tezuka's intent.

"I thought I was the greediest man ever."

This seems like kind of a joke, so I don't think his prime motivation is greed. In fact Black Jack doesn't seem to spend much of his money ( he basically lives in a shack). Later in the same story he charges the son of the old lady a huge sum, but that seems to be a test to see if the son is willing to make the same sacrifice that his mother did. It's not clear if Black Jack actually charges the son after the son passes this test. 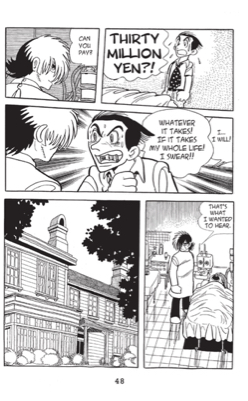 These two examples could provide some reason for his fees, but I tend to think that he really just decides the fee based on the character traits of the patient, circumstances, or finances of the requestors to either punish, reward, or test their worthiness.

Not the answer you're looking for? Browse other questions tagged black-jack .

4
Is "Ray" a sidestory of "Black Jack"?
9
Was Dr. House inspired by Black Jack?
9
What caused the scars on Black Jack's face?
7
Which Black Jack anime most closely follows the manga?