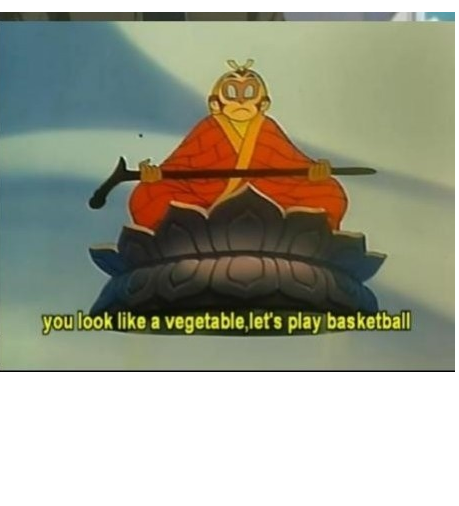 I have been searching for forever to find the name of a anime series/ movie that I saw more than 20 years ago. Here goes nothing!

The series/ movie is about a little boy monkey (kind of like the monchichi monkeys) with brown fur. He is very rude and I remember that nobody likes him except for a little female monkey with white fur. Then there is this old wise monkey that puts a golden diadem on the head of the rude little monkey to teach him a lesson in humbleness and kindness. He is also put in some kind of (tree)cage. The female monkey keeps visiting him and keeps bringing him food, even when it starts to snow. He tells her to stay away, even though he kind of likes her, because he doesn't want her to go through all this trouble for him. At the end of the series/movie the little monkey is now more humble and nice to everybody and the golden diadem is removed from his head.

The picture above is how I picture the old wise monkey, but this picture could be from another series/movie.

I also remember that there was another character. He was more human, like a tiny childlike demon-boy with a horn on his head. At one point he was riding a horse, but not on the back of the horse, but upside down on the belly of the horse. At the end of the series/movie, this character also became more "good". I don't remember if there were human characters involved in the series/movie.

Ok this sounds like a weird kind of shroomtrip, but this is all I can remember. I really hope that someone recognizes some of this stuff and can give me more information about it! Thanks a million in advance!

The character resembles Sun Wukong from Journey to the West story. I know there are several Chinese cartoons about it. This is only a speculation because not all of them fit with what you wrote.

1. The picture in question

That character resembles Sun Wukong from an old Chinese cartoon I watched in the early 80's. See the similarity in his face, hat and yellow cloth (not the red robe) in the first picture. See also the golden diadem in the second picture. The diadem is given by Goddess Guanyin so Sanzang can punish Wukong whenever Wukong disobeys him. There are 3 OVAs that I know, but the story is quite different from what you wrote.

The second OVA is Ginseng Fruit (人参果) which was released in 1981. Wukong stole some fruit and angered the tree owner. 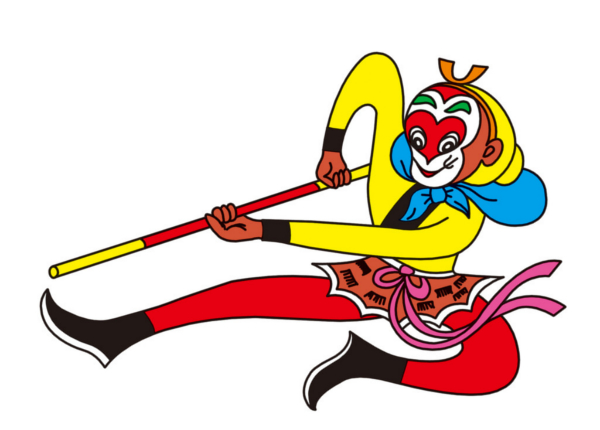 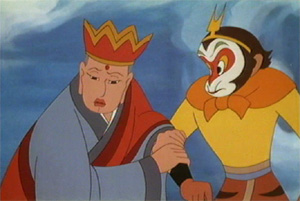 The last OVA is Monkey King Subdued the Evil (金猴降妖) which was released in 1985, there's a scene where a demoness disguised as a kid tries to kidnap Wukong's master. The kid's hair style looks like horns. The kid and Wukong's master ride a horse and Wukong grabs the horse from below. See the pictures below. You can also watched the scene in Youtube. Skip into 24:45. 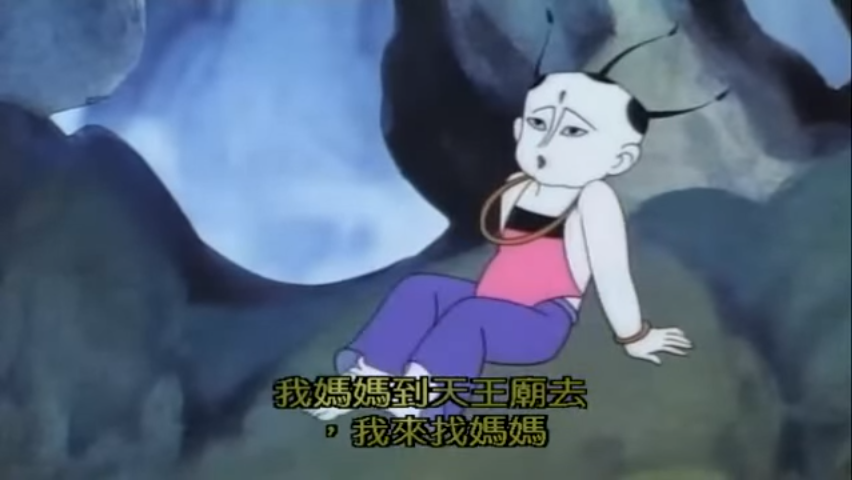 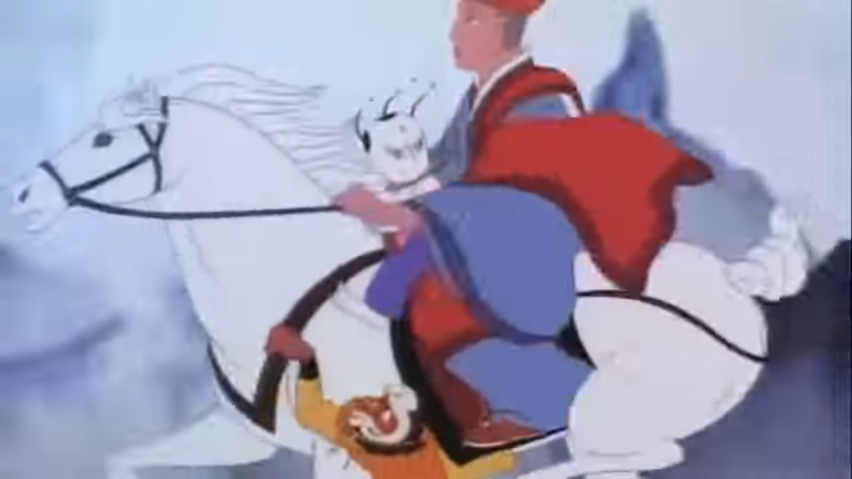 3. The female monkey and old monkey

This is from the TV series which was released in 1998 by CCTV. It consists of 52 episodes. Wukong saves a female monkey after he's born from the holy rock in episode 1. 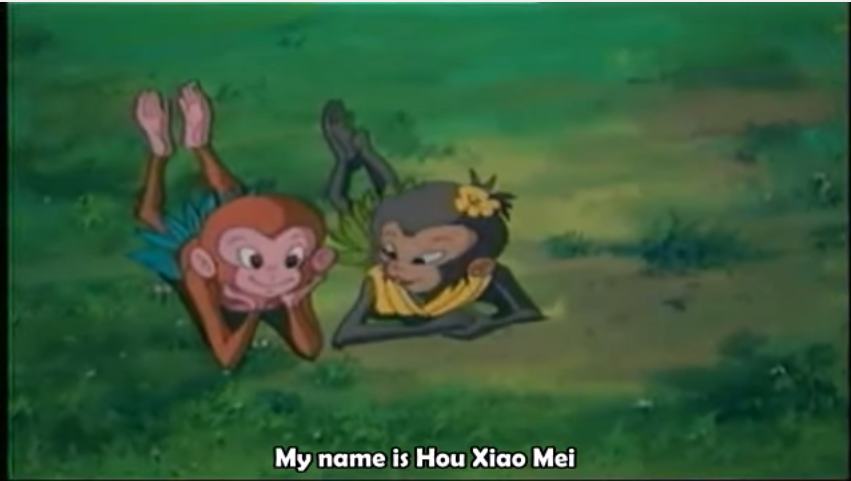 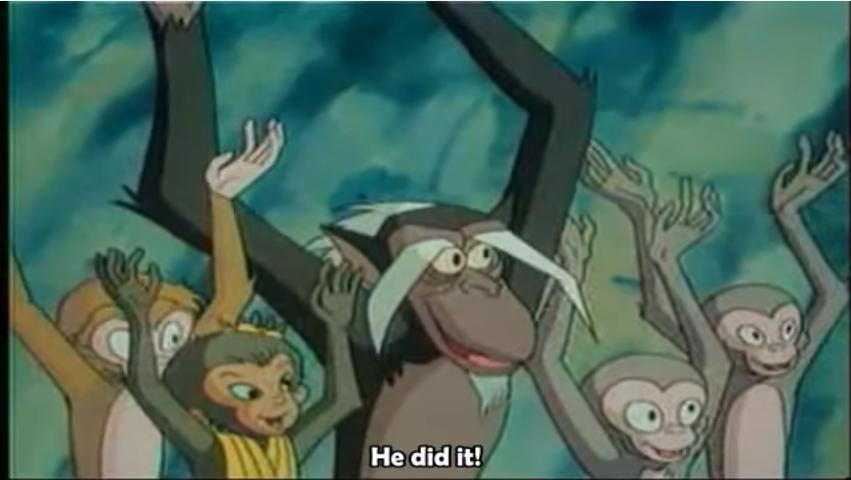 After completing the challenge, Wukong wants to become a disciple of Master Puti. Master Puti didn't welcome him at first. So Wukong sit at the door for days. Even when it's raining and snowing, he still sits at the door. Finally Master Puti is moved by his dedication and teaches him 2 sacred arts, the Somersault Cloud and 72 Transformations. This scene is still in episode 1. 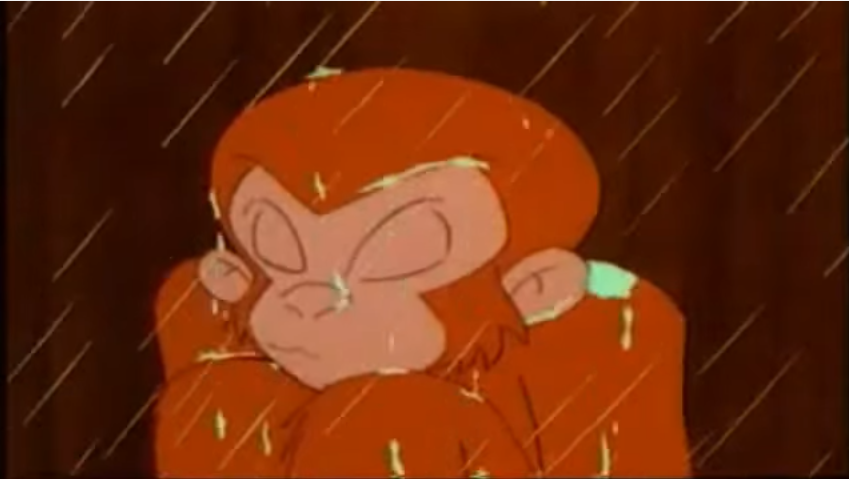 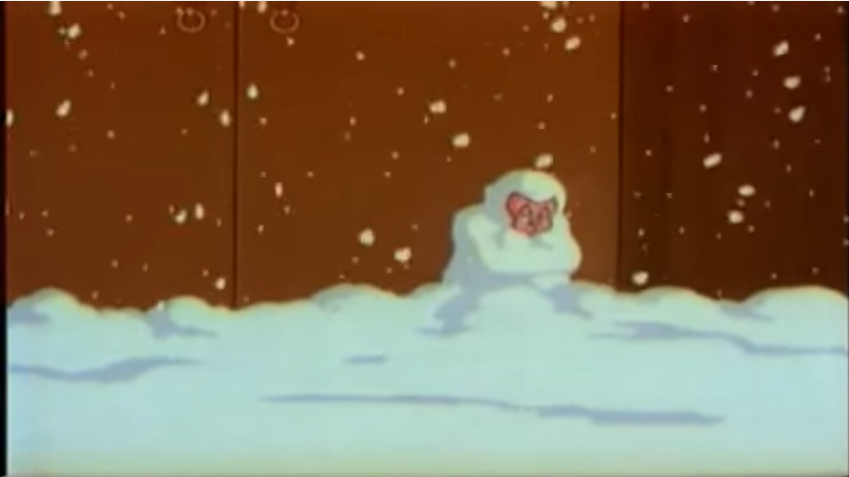 After causing havoc in heaven, he was punished by the Buddha. He was imprisoned under a mountain and sealed by a paper talisman. Later Sanzang released him and made him his disciple. 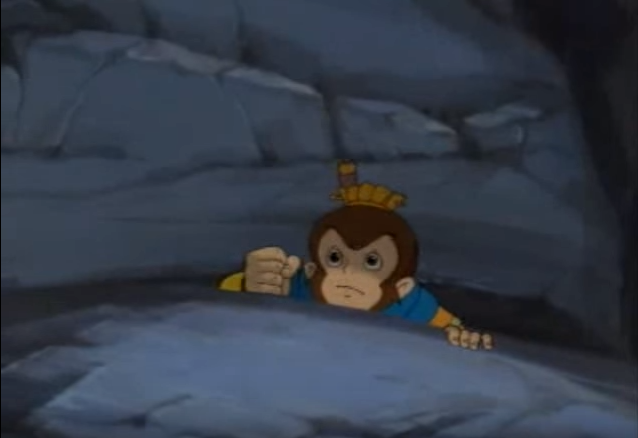 a. The diadem is not given by the old monkey. I suspect there is another story after Sun Wukong finished his journey and was granted Buddhahood. In your picture, he wears a Buddhist robe, does wear his golden diadem, sits in lotus position on a Padmasana (lotus throne) are what made me think of this. But this is just a speculation.

b. The female monkey is not a love interest.

c. He's imprisoned under a mountain, not a cage nor a tree. The is no one who visits and gives him food.

The movie is called Alakazam the great, It is a 1960 Japanese musical anime film, based on the Chinese novel Journey to the West, and was one of the earliest anime films to be released in the United States.(wikipedia)

Alakazam is a young and brave monkey (a macaque) who has been encouraged by all the other monkeys to become their king. After attaining the throne, he becomes rude and dictatorial, and does not believe that human beings are greater than he is. Then he tricks/forces Merlin the magician to teach him magic (reluctantly on Merlin's part, who warns Alakazam that the powers he acquires now will bring him much unhappiness later).

Alakazam becomes so arrogant that he abuses his magic powers, and chooses to go up to Majutsu Land (the Heavens), to challenge King Amo. He is defeated by King Amo. For his punishment, he is sentenced to serve as the bodyguard of Prince Amat on a pilgrimage; in order to learn humility, mercy and to fight with wisdom. Ultimately, he learns his lesson and becomes a true hero. 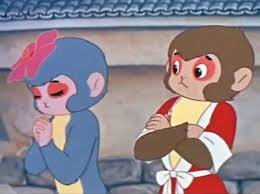 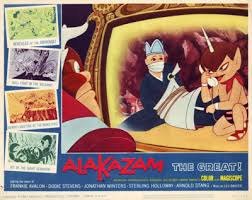 Not the answer you're looking for? Browse other questions tagged alakazam-the-great or ask your own question.