How can Lelouch use his geass on so many people?

One of the rules is, that he has to make direct eye contact. Yet he's able to geass about twenty people at the same time in Episode 1 from Season 2. He even is able to do it later, too. So how can he do this?

On the Code Geass Wikia it says

Lelouch's Geass manifests itself as "the power of absolute obedience," which allows him to plant commands within a person's mind upon direct eye contact.

So how focused is Superman's heat vision? Not very, under most circumstances. Most often, it's depicted as a rapidly widening cone, starting at eye-width but growing to several feet across by the time it reaches the opponent, even at close range.

with Lelouch's Geass it expands out and through obstructing this "widening cone" with his Zero helmet he can focus it slightly to one person. from there he should realistically be able to see his target's eyes even if his vision isn't focused on them

My evidence showing Lelouch alone just need to be able to see his target's eyes is in Season 2: Turn 15 - C's World when Lelouch goes to order Charles to kill himself by having the Shinkirō release mirrors and using one mirror bounce his Geass around to target Charles without Charles being able to target him which his Geass too needed eye contact. 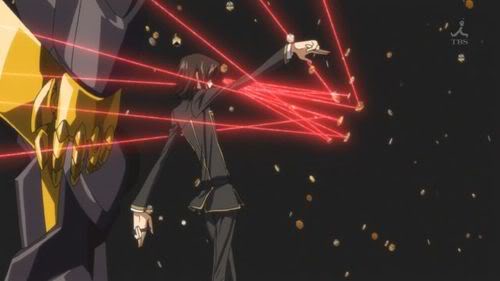 this would also explain why the United Federation of Nations' counter measure to his Geass was to trap him in an isolated room and display him on a monitor.

my evidence as to Lelouch not needing to focus on the target eyes is when his Geass went out of control while talking to Euphie. it's just my personal interpretation but i do not believe Lelouch was focusing on Euphie's eyes but her face as he was more or less allowing Euphie to win and amend his plans to fit with her own and he was joking about Euphie how he could order her to "kill the Japanese", however he could realistically look into her eyes at any point while looking at her face

While one can argue "Lelouch's power went out of control then so he can no longer focus it" lets remember that his geass was out of control in Season 2: Turn 15 - C's World and when he first gained his power he ordered a group of soldiers to kill themselves and i seem to remember there was times where he would open up one part of his Zero Helmet to use his Geass

3
How can one overcome the power of Geass?
14
How can we convert between a.t.b. and Revolution Year?
4
Can an order be Remembered / “Sanity” be kept
4
How CC dispel the Emperor's Geass of Lelouch?
2
What are the characteristics of the Geass power?
3
How does Lelouch manage to contain his Geass?
4
Can I play a PAL copy of Code geass on my US player?
4
For how long has Lelouch been the Emperor of Britannia before and after “turning evil”?
1
Why didn’t Lelouch use Geass on himself sooner?